THE MEMORIAL TO SUBMARINERS

To coincide with the release of Casement’s images, Historic England has announced that the Department for Culture, Media and Sport will upgrade the National Submarine War Memorial to Grade II* status. Located on the Thames embankment at Temple Pier in London, the memorial was original dedicated to the submarines and submariners of the First World War.

The sculpture by Frederick Hitch consists of a bronze relief panelling depicting four naval figures in the interior of a submarine contending against the inimical influences of the ocean, represented by figures attempting to trap it in a net. On the left is a plaque listing the submarines lost in 1914-1918 and on the right is a list of submarines lost from 1939 to 1945. To the left and right of the plaques are female figures representing Truth, and a blindfolded Justice. Under the centre panel is an oblong plaque showing a submarine cruising on the surface of the sea.

Ornamental border includes the badge of the Royal Navy, some dolphins and the prows of boats. The memorial was unveiled on 15 December 1922 in a ceremony attended by Admiral Sir Hugh Sinclair KCB. 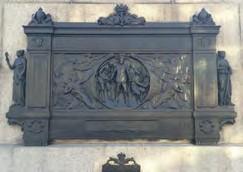