February 1944, and the pilots of 263 Squadron had just completed their first sorties on their new Typhoons. However, no one could predict that events would render them non-operational within just a few weeks 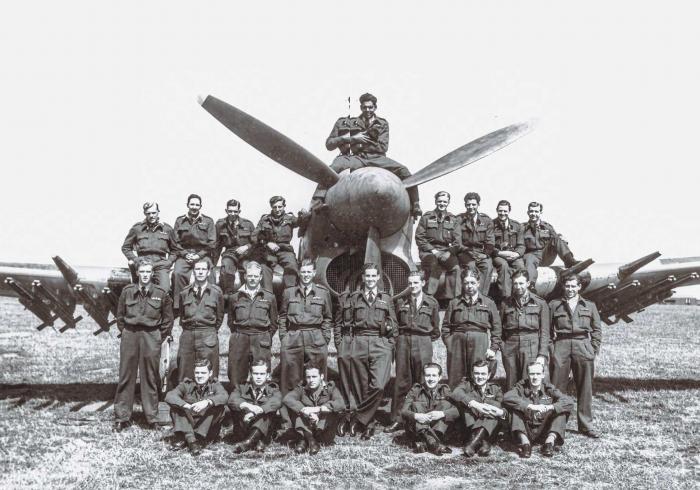 MEMBERS OF 263 SQUADRON AFTER THEIR ‘MONTH OF MISHAP’, LIKELY TAKEN IN JULY 1944 AS SQN LDR ROBERT RUTTER (MIDDLE ROW, CENTRE) IS IN COMMAND (HAVING TAKEN OVER ON JUNE 15) BUT THREE PILOTS KILLED IN LATE AUGUST ARE PRESENT
IMAGES COURTESY OF CHRIS GOSS UNLESS OTHERWISE NOTED

In December 1943, 263 Squadron began converting from the twinengine Westland Whirlwind to the Hawker Typhoon. On February 1, 1944, it was declared operational and days later began flying sorties from Beaulieu, Hampshire.

However, if the squadron’s pilots thought their first month of operations on the new type would be a quiet one – they were about to get a shock.

The war had, thus far, been dramatic for 263 Squadron. Reformed in October 1939 and flying Gloster Gladiators, in April 1940, it found itself fighting over Norway.