HM The Queen has conferred new Battle Honours onto 41 RAF squadrons, recognising the efforts of 32 flying and nine RAF Regiment squadrons on operations in Afghanistan between October 7, 2001, and December 31, 2014. 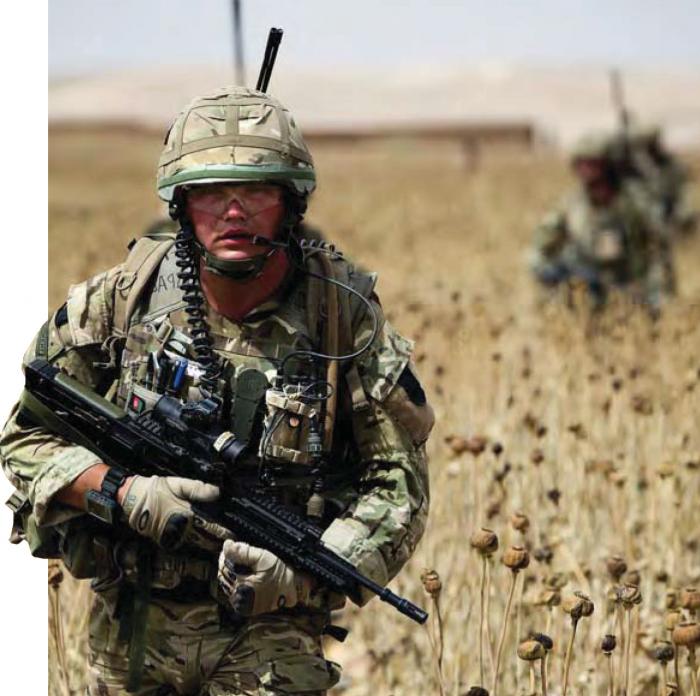 MEMBERS OF 51 SQUADRON, RAF REGIMENT, PATROL SOUTH OF CAMP BASTION, MAY 2012. THE UNIT IS ONE OF NINE RAF REGIMENT SQUADRONS RECEIVING THE RIGHT TO EMBLAZON THEIR NEW HONOUR.
(CPL PAUL OLDFIELD/CROWN COPYRIGHT)

Battle Honours, emblazoned versions of which can adorn a unit’s colours, guidon or equivalent item, are entitlements awarded to commemorate prominent participation in a notable action or engagement. The first was awarded to the 15th Hussars in 1760 for the Battle of Emsdorf and the honour can be bestowed retrospectively, the earliest being Tangier 1662-80. It is a largely British/ Commonwealth military tradition and, in the Royal Navy, such honours can be awarded for single-ship actions as well as campaigns. As warships have no colours, Battle Honours are instead displayed on an honour board.

The base honour recognises the significant contribution of a unit, with the right to emblazon distinguishing those that embraced esprit de corps and demonstrated gallantry under fire; the nine RAF Regiment and six flying squadrons have been awarded the right to emblazon. The Queen also granted additional honours to correct previous omissions: Bosnia 1995, with emblazonment, has been awarded to No.IV (AC) and No.6 Squadrons, along with Sierra Leone 2000, with emblazonment, being granted to No.7 Squadron, and Iraq 2003-2011 has been bestowed on No.78 Squadron.

Chief of the Air Staff, Air Chief Marshal Mike Wigston, said: “[Battle Honours] add to the RAF’s rich history of operational excellence, protecting our nation. Everyone involved can be rightly proud of the part they played.”.