Atlas Editions launched ‘Jet Age Military Aircraft’ a new die-cast model collection, on January 23 . One model will be available per month, but the first, is a 1:144 scale model XM607 Vulcan, which flew in the Falklands War in 1982 and took part in the ‘Black Buck’ operations. The Avro Vulcan Bomber was the most advanced plane of its day, topping its American and Russian counterparts and was the spearhead of Britain’s cold war nuclear strike force, becoming an icon of the modern age. It is perhaps fitting that nearly two years after its final flight, the Vulcan is the first model in the new collectors’ series to be released. Bill Ramsey, the captain of the last ever Vulcan flight said: “It’s great to see such a detailed model of perhaps the most famous Vulcan, XM607, become available to collectors and enthusiasts.” If you want to compare it to the real XM607, it can be viewed at RAF Waddington Aircraft Viewing Enclosure. For more information http://bit.ly/avrovulcanbomber 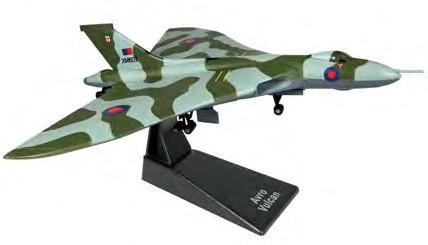