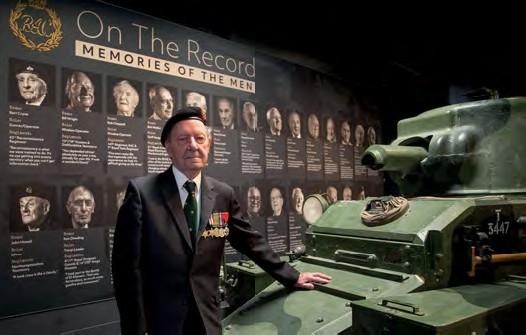 Bill Wright, of the 13th/18th Hussars and Staffordshire Yeomanry. (THE TANK MUSEUM)

THE BOVINGTON-BASED Tank Museum has opened a new exhibition, Long After the Battle, to mark the 80th anniversary of the Royal Armoured Corps (RAC).

Founded on 4 April 1939, just six months before the outbreak of the Second World War, the RAC combined around 20 mechanised cavalry units and training regiments with the newly renamed Royal Tank Regiment.

Soon, it incorporated more cavalry regiments as well as yeomanry regiments from the Territorial Army. The quickly expanding corps soon included dozens more formations, such hostilities only and converted infantry regiments before, in 1944, incorporating the Reconnaissance Corps. Today, the RAC operates a variety of vehicles from Challenger 2 to Scimitar II and Jackal in ten regular and four reserve regiments.

Long After the Battle tells the story of those who fought in RAC regiments during the Second World War and includes four 1940s-era tanks. The Tank Museum is the corps museum for the RAC, and the regimental museum of the Royal Tank Regiment so, in the words of curator, David Willey, “wants to connect the lives of the men who fought in them and tell their stories.”

He added: “We interviewed more than 30 veterans, and their number is dwindling so it is important to hear what they have to say. They are in their 90s, have nothing to prove and no agendas to meet, and some revealed things they have never spoken about previously.”

The exhibition focuses on five ‘tankies’who saw action from D-Day in June 1944 until VE Day: Captain David Render of the Sherwood Rangers Yeomanry; Corporal Reg Snowling of the 23rd Hussars; Michael Sutton, a Sherman Flail commander with the Westminster Dragoons; Charlie Burgess, a driver with the 8th Kings Royal Irish Hussars, and Bob Chappell, a wireless operator with the 147th Regiment RAC.

Seeing all the tanks here brings back lots of memories, and when I saw the Tiger tank at the museum it still made me shiver.

There are not many of us left and it is important to keep our stories alive.”

The Long After the Battle exhibition will run for nearly two years and is a precursor to a new Second World War exhibition due to open next year.∎