TWO CEREMONIES took place in France in mid-July to pay tribute to Brazilian-born Wg Cdr Cosme Gomm DSO DFC and his Lancaster crew, writes Chris Goss. In the first of the commemorations, held at St Désir Cemetery, Lisieux, on July 16, relatives of the crew, some of whom came over from Brazil, visited the men’s graves. The second, which took place at Chuisnes the following day, was to unveil a new memorial to the fallen airmen.

Wg Cdr Cosme Gomm was born in Curitiba, Paraná, in 1913, joining the RAF in 1933. He flew with 45 and 14 Squadrons in Egypt and the Middle East, but in 1939 returned to Britain to become an instructor.

In July 1940, he joined 77 Squadron and on completion of his tour, for which he was awarded the DFC, he retrained as a night-fighter pilot. In March 1941 he joined 604 Squadron, where he was later credited with damaging a Ju 88 and destroying three He 111s. Promoted to squadron leader in June 1941, he took command of 1454 Flight. 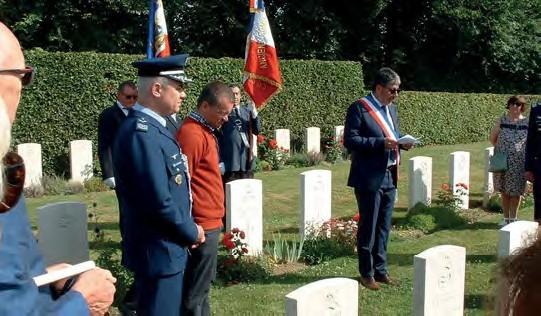 The new memorial at Chuisnes. (ALL PHOTOS BY CHRIS GOSS)

Further elevation up the ranks (to wing commander) followed 12 months later, and he converted to multi-engined bombers as well as being given command of the Australian 467 Squadron, flying his first operational sortie to Berlin on the night of January 16, 1943. His 24th and last mission of his second tour was against Milan, by which time he had been awarded the DSO. 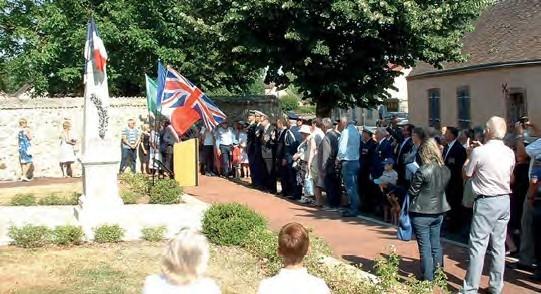 Dignitaries at the commemorations, held at the St Désir Cemetery, Lisieux, on July 16.

Gomm’s Avro Lancaster III ED998, coded PO-Y, was intercepted by a Focke-Wulf Fw 190 flown by Oberfeldwebel Josef Bigge of 2 Staffel/Jagdgeschwader 2 on the night of August 15, 1943. The bomber caught fire and exploded over Chuisnes, west of Chartres. Only the flight engineer, Sgt James Lee, survived. 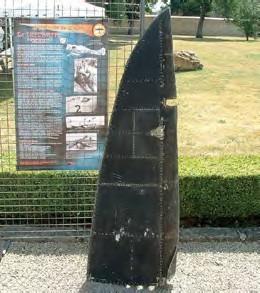 A local historian has much of the tail of the Gomm Lancaster.

Buccaneer Gets A Makeover 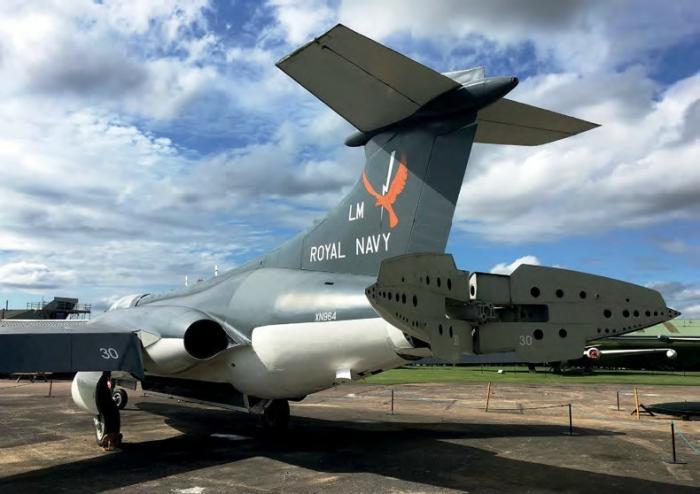 RESTORATION TEAM members at Newark Air Museum in Nottinghamshire have been adding the finishing touches to the collection’s Blackburn Buccaneer S.1 XN964. The rare de Havilland Gyron Junior-powered S.1, a former Fleet Air Arm highspeed low-level strike aircraft, has recently had squadron markings applied, and now carries the same insignia it wore with 736 Squadron, the Fleet Training Unit, at RNAS Lossiemouth, Scotland, in 1965. It also served with 801 and 803 Squadrons during its career with the navy, plus spent time as a trials platform.www.newarkairmuseum.org 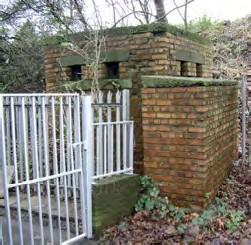 Under threat: the pillbox on Gipsy Patch Lane in north Bristol. (VIA BRIAN HAWKINS)

EFFORTS ARE being made to find a new home for a wartime pillbox, situated by a low narrow railway bridge in Gipsy Patch Lane, near Filton Airfield in north Bristol, writes Brian Hawkins.

The fortification, one of a huge number of varying types constructed to defend the coast and key sites from Nazi invasion or airborne assault, was due for demolition in October, as South Gloucestershire Council (SGC) is going to replace the bridge with a higher, wider version to accommodate double-decker Metro buses.

The contract to replace the bridge was given to Network Rail, accepted owners of the pillbox.

Network Rail will have the structure carefully dismantled and stored for six months at a suitable site, making it available for relocation, following a concession won at a recent SGC planning meeting.

The council had found little interest locally in taking the structure on, probably due to shortage of land and massive development in the area. This has led to the pillbox being offered free of charge to a wider area, in a desperate bid to save it. It is a Type 26 variant – nonstandard, 9ft by 9ft2 (2.74m by 2.74m2), with the embrasures being 9ft (2.74m) high. Interested parties should inquire in the first instance by email to: brianpop4@outlook.com

THE FIRST Chelsea History Festival is to take place at the National Army Museum, Royal Hospital Chelsea and the Chelsea Physic Garden, off Royal Hospital Road, London, on October 9-13. The organisers of the all-new, five-day history festival say it will host more than 35 events and provide a platform for both established authors and emerging performers to help make history more accessible.

The festival opens with celebrated Arnhem veteran, Chelsea Pensioners. (VIA NAM) Under threat: the pillbox on Gipsy Patch Lane in north Bristol. (VIA BRIAN HAWKINS) Victor Gregg, in conversation with bestselling historian Rick Stroud, followed by a lecture from Antony Beevor on the famous ‘battle for the bridges’. Thursday’s main event is an evening performance of The Lark Ascending, which is taking place in the Wren Chapel at the Royal Hospital Chelsea. Max Hastings headlines Friday with a talk on his new book Chastised: The Dambusters Story, 1943, which is due to be published this September. Saturday is set to be the principal day of the festival with more than 20 scheduled events including history walks around the neighbourhood and David Nott sharing his experiences as a surgeon in Aleppo, Syria.

Founder of Britain’s Chalke Valley History Festival, James Holland has been instrumental in consulting on the schedule, together with the Chelsea History Festival’s creative director, artist and author, Harry Parker. Holland says:

“It is great to see the Chelsea History Festival join the calendar of history events in Britain. Royal Hospital Road in Chelsea is so rich in heritage and provides a magnificent setting at the heart of one of the great cities of the world. Being so easily accessible to many millions of people makes it an ideal location in which to share the stories that have shaped our world.” Tickets go on sale in September, ranging from free events to £30. The full programme will be available at: www.chelseahistoryfestival.com 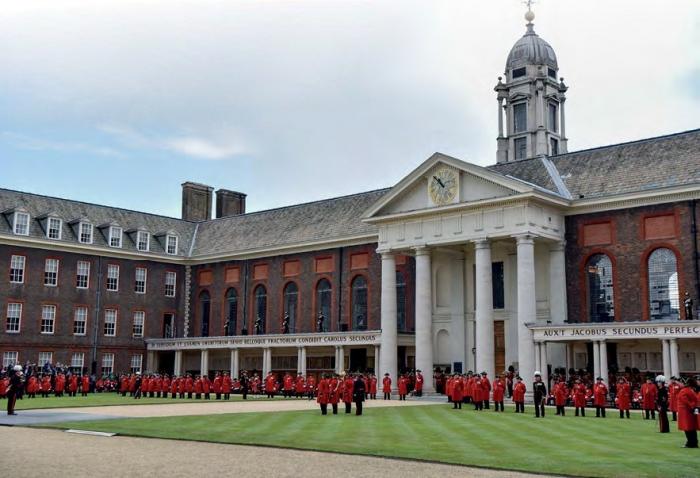 Royal Hospital Chelsea, an exquisite building and open space founded in 1682, designed by Sir Christopher Wren and home to living history, the Chelsea Pensioners. (VIA NAM)