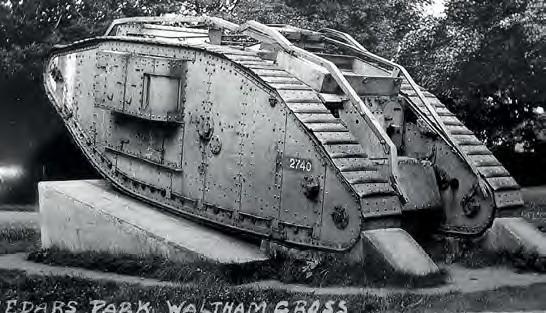 This Mark IV Female tank, number 2740, saw action in France during 1917 and 1918. It was given to Cheshunt Urban District Council as a presentation tank and mounted on a plinth in Cedars Park, Waltham Cross. (POSTCARD)

A REPLICA Mark IV tank, similar to that presented to the town of Waltham Cross following the Great War, has been mounted on the same plinth constructed for its forbear, Craig Moore reports.

On July 1 the replica was driven into Cedars Park in Waltham Cross, Hertfordshire, 12 miles northnortheast of London. The project was funded by the Borough of Broxbourne as part of the centennial anniversary of the Great War, in memory of the men and women who lost their lives during that conflict.

From 1919, many British towns and cities were offered tanks in recognition of the substantial sums they raised to help fund the war effort. These ‘presentation tanks’ were used as memorials, with some placed in town squares, in front of churches or cathedrals, next to medieval city walls or in local parks.

Cheshunt Urban District Council (now the Borough of Broxbourne) received its Mark IV Female tank in 1921. It was placed on a concrete plinth in Cedars Park and remained there until 1940, when, amid a greater national struggle, the council authorised it to be cut up for scrap. In May 1940 it was dismantled by Messrs Cox and Danks for £27, 16 shillings and 10 pence.

On August 22, 1917, 2740 received a direct hit from a German shell and was one of four tanks put out of action the night before a planned attack. She was repaired.

From 1918, Mark IVs were gradually replaced by the Mark V, but the older tanks were often retained for use in support roles. The Cedars Park tank was converted into a ‘top draw sledge hauler’. A large rectangular block was attached to the roof, at the rear between the unditching beam rails. Two cables ran from this to a large wooden sledge that would be packed with fuel cans, rations and ammunition. 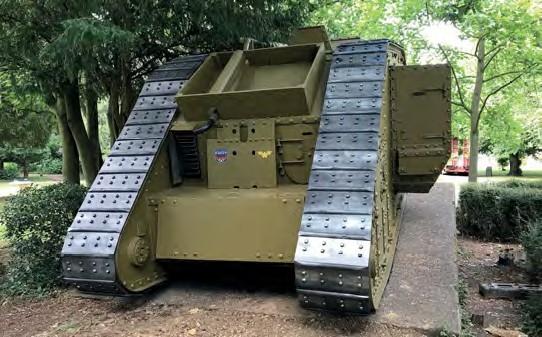 On the back of the replica there are two logos. They serve as a salute to the movies this tank has appeared in: Transformers on the left and Wonder Woman on the right. (TONY COOKE)

The unditching beam rails had to be modified to allow the beam to slide past the added block, the curve in both rails is visible near the rear of the tank. The towing block is also still visible.

In 2006, a working Mark IV Male tank replica was constructed by Dr Tony Cooke and Kevin Jepson for the film Magic Flute. It appeared in several other productions including Wonder Woman, Transformers 5, episode three of In Love and War and Tommy. It was a deliberately shorter than original Mark IVs to enable better movement around on set. In 2018 it was decided to use the engine and track system from this tank to construct a working replica of a Medium Mark A ‘Whippet’.

The Borough of Broxbourne offered to buy the external body if it could be converted into a memorial. Conversion work started in early 2019 and progressed quickly, being completed by June. 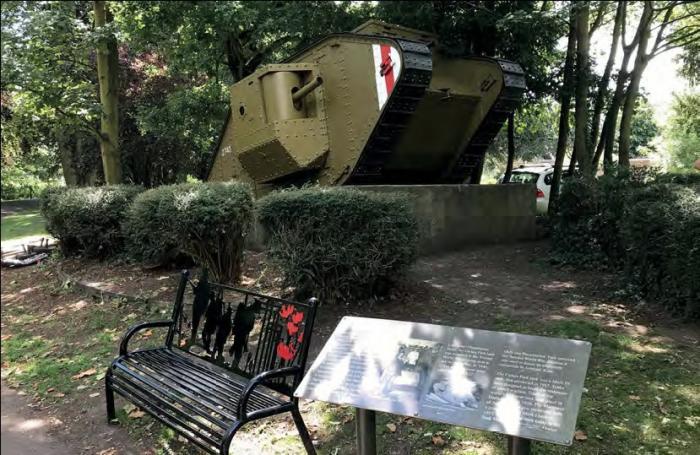 ON JULY 28, 1944 the seven-strong crew of Lancaster JB701 EA-G lifted off from their base at Fiskerton, Lincolnshire. Aiming for targets in Stuttgart, JB701 was one of a dozen No.49 Squadron aircraft involved and part of a force of more than 500 RAF bombers allocated to the raid. 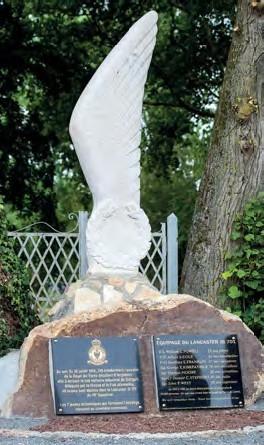 The memorial to Lancaster JB701’s crew. (SAC WILL DRUMMEE/CROWN COPYRIGHT)

With recent sorties against Stuttgart thwarted by bad weather, it was hoped this latest raid would benefit from good conditions. However, operating on a bright, moonlit night had its dangers and the raiders met with disaster. Night fighters claimed 39 bombers that night, including Powell’s.

All seven aboard JB701 were killed. They crashed near Sens, 75 miles south of Paris, and were buried in a nearby cemetery at St Martin-sur-Oreuse. Three-quarters of a century later, they have been honoured by the unveiling of a new memorial sited in the field where the Lancaster crashed. The site had previously been cared for by local children and the ceremony was organised by Jean-Luc Prieur, who has spent much of the last 15 years searching for the descendants of the seven dead. 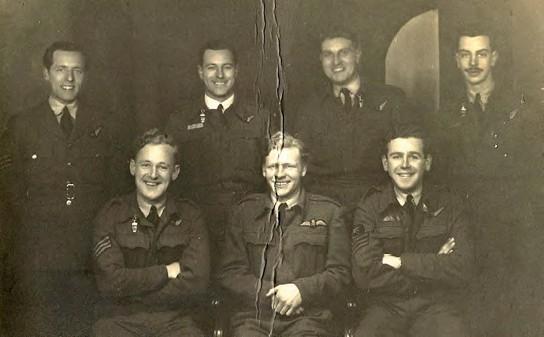 The crew of Lancaster JB701. George Kirkpatrick is seated bottom left. (VIA MOD)

Among those attending was Bob Kirkpatrick, 76, whose father George was killed on JB701 when Bob was just 18 months old. Bob travelled to the unveiling with his wife and two nieces, he said:

“My father and many others gave their lives so that we could all be free. For the past 75 years this French village community has honoured my family by tending his grave, ensuring his sacrifice is remembered. This part of France, like many others, will remain connected to Britain by the blood in the soil. I am happy that my father is buried with his crew and that his resting place is protected by friends he never met.”

It has never been confirmed who shot down JB701, but 49 Squadron Association researcher, Colin Cripps, suggests ace Hauptmann Heinz-Horst Hißbach of 5./NJG 2 was responsible. He claimed to have downed a heavy bomber over Sens just before 1am that night. He was killed by ground fire in April 1945, having claimed 30 kills – 26 at night.

Alan Turing to be Honoured on £50 Note

CODEBREAKING GENIUS and artificial intelligence pioneer Alan Turing OBE FRS has been selected as the face of the new £50 note, the Bank of England announced. Turing was selected by the governor of the bank, Mark Carney, over 11 others on a shortlist which had been whittled down from 989 eligible figures nominated by 227,000 people.

He said: “Alan Turing was an outstanding mathematician whose work has had an enormous impact… As the father of computer science and AI, as well as war hero, Turing’s contributions were far ranging and path breaking. [He] is a giant on whose shoulders so many now stand.”

Turing, born in June 1912, helped set the foundations for future work in AI. He devised the Turing Test to measure the ability of AI to exhibit intelligent, considered behaviour indistinguishable from human thought. While now celebrated for his war work, Turing was convicted of gross indecency in 1952 after acknowledging his homosexual relationship. Instead of prison, he opted to undergo medical processes designed to force hormonal changes and chemical castration. He committed suicide, aged 41, in June 1954.

Homosexuality outside of the armed forces and Merchant Navy was decriminalised in England and Wales in July 1967, with Scotland and Northern Ireland following in the 1980s. Openly gay, lesbian and transgender service personnel have served since 2000. Turing was granted a posthumous royal pardon in December 2013, with then Justice Minister Chris Grayling describing him as an “exceptional man with a brilliant mind”. A general pardon – Turing’s Law – was extended posthumously to thousands of men convicted under similar circumstances in 2017.

The new note, which will depict a 1951 photograph of Turing and formulae from his 1936 paper On Computable Numbers, with an application to the Entscheidungsproblem, is slated to enter circulation in late 2021.