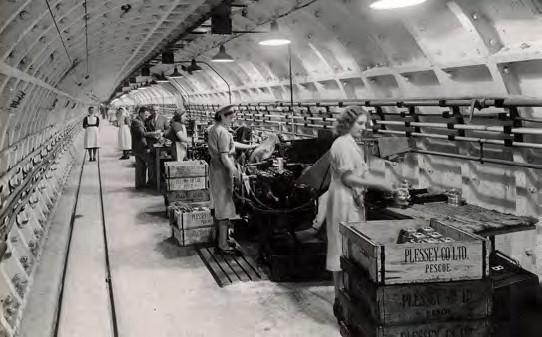 An image of the wartime Plessey aircraft underground factory on the Central line in 1941.
(VIA LONDON TRANSPORT MUSEUM)

A NEW exhibition that will give visitors the chance to experience part of an ‘abandoned’ London tube station is set to open at the London Transport Museum, Covent Garden, on October 11. In addition to the recreated sections of disused tube stations, Hidden London will feature displays, archive photos, films and artefacts. These will tell of such places as the Plessey aircraft underground factory which had 2,000 members of staff, mostly women, working in 5 miles (8km) of long tunnels on the eastern section of the Central line during the Second World War.

The new display will also show how Winston Churchill took refuge in the Railway Executive Committee’s bomb-proof headquarters 73ft (22m) underground at Down Street station in Mayfair. The museum has recreated the dining room used by Britain’s wartime leader with tables, chairs, wine bottles, menu cards and ashtrays similar to those Winston Churchill would have used.

Some objects will be on public display for the first time, such as a 1939 architectural drawing of Down Street station before it was converted into a secret bunker. Hidden London. The exhibition opens on October 11 and runs to January 2021.