Commissioned by a United Arab Emirates-based military vehicle manufacturer, a rapid intervention vehicle, has been put together by Horiba-MIRA, a Warwickshire-based test facility.

The brief was to design and build, from scratch, a rapid-insertion, high-performance vehicle for desert use by up to four heavily-armed members of UAE special forces weighing around 120kg each. “It’s the fastest vehicle across the desert,” said chief project engineer Jim Hopton. At 4,000kg, the RIV is no lightweight, but it can perform the 0-62mph test in 10.5sec and then cruise comfortably at 100mph, with or without the windscreen. 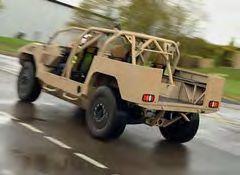 The REME museum successfully completed its move to Lyneham and opened its doors to the public on June 6. After 57 years in Arborfield, Berkshire, the REME Museum closed to the public in April 2015 and began packing the collection. More than 100,000 items in their collection have been moved, including more than 100 vehicles, the majority of which are REME specific variants.

It is prom season, and one lucky lad from Lancashire made quite an entrance arriving to his in a tank. Brennan Boys went to his prom at Alder Grange Community and Technology School in Rawtenstall in a 30-year-old, 17-tonne Austrian Saurer Tank, owned by Grandpa Brian Boys who, until 2010 when most of it was sold off, had an extensive collection of military vehicles, some of which were used in the filming of Saving Private Ryan. 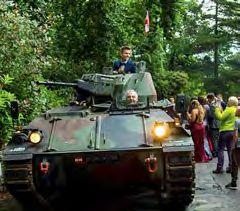