On October 20, the Kurdish Peshmerga claimed to have destroyed a USA-made Iraqi M-1A1 Abrams tank during fighting in Kirkuk province and have grainy video footage to prove it

The Iraqi military’s Joint Operations Command accused the Peshmerga of targeting the tank with a MILAN anti- tank missile launcher, which Germany supplied by the dozens to the Peshmerga for use against Islamic State’s up-armoured suicide bomb vehicles. The Peshmerga denied using MILANs in the clash, but the Kurdish army does have other tank-busting weapons other than the MILAN. One possibility is that they used a Chinese-made HJ-8 ‘Red Arrow’ anti-tank missile. I

f so, it would be a rare example of a Chinese- made missile destroying an American- made tank and indicates a potential vulnerability with the Abrams. The M-1s supplied to Iraq lack the high-tech active- protection systems that are becoming increasingly common on modern tanks but the US military’s own Abrams are only now starting to receive those defences. 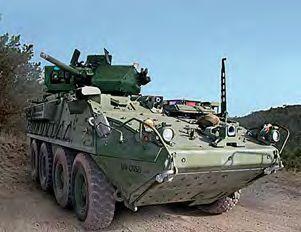 GDLS expect to have 83 Stryker Dragoons completed by May 2018. The second type comes with Raytheon’s Javelin anti-tank missiles on the Kongsberg Common Remotely Operated Weapon Station (CROWS II), and 87 javelin-equipped units are planned. The vehicles were approved in 2015 in order to fit an operational need statement from the 2nd Cavalry Regiment (known as the Dragoons) based at Vilseck in Germany.