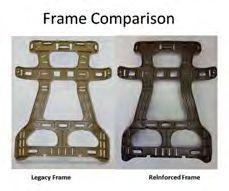 Marines training in Norway’s Arctic last year reported that many of the corps’ standard- issue FILBE pack hard plastic frames were cracking and breaking because of the intense cold. This has called into question US preparedness for Arctic operations against adversaries like Russia and China, and whether officials in the Marine Corps had properly vetted the equipment for cold weather operations.

A UK-led enhanced forward presence has begun with the deployment of 800 troops from 5 Rifles battle group, based in Wiltshire and from The Queen’s Royal Hussars, based in Paderborn, Germany to work with Estonian, Danish and French allies. The UK has committed more than 300 vehicles to support Estonia during this deployment, including Warrior infantry fighting vehicles, Challenger 2 tanks, AS90 self-propelled artillery guns and Terrier, Titan and Trojan armoured battlefield engineer vehicles.

As lead armoured infantry element of the NATO Very High Readiness Joint Task Force the 1st Battalion of the Princess of Wales’ Royal Regiment has conducted a live-firing exercise on Sennelager Training Area in Germany. Using their Warrior Armoured Infantry Fighting Vehicles, they conducted company attacks as part of a battlegroup scenario with support of the Challenger 2 Main Battle Tanks of C Company, the Queen’s Royal Hussars