Emmanuel Macron broke a tradition at his recent inauguration. Presidents of France normally travel by civilian limousine but Macron opted for an opentopped, camouflage military Jeep for the ceremonial drive up the Champs-Élysées in Paris.

The new president lit a flame to honour France’s war dead at the tomb for the unknown soldier then made the entourage detour via a military hospital so that he could visit soldiers wounded on operations in Mali and Afghanistan. He is said to want to show “deep empathy for the defenders of freedom in our country”. 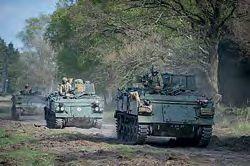 The Indonesian Marine Corps has officially begun using five Ukrainian BTR-4Ms, which were delivered by SpetsTechnoExport earlier this year. Their director, Pavlo Barbul announced that “the handover of new Ukrainian armoured personnel carriers BTR-4M to military units of the Indonesian Marine Corps has been completed”, meaning that they delivered the contracted five armoured personnel carriers BTR 4-Ms, which are produced at the snappily titled Ukroboronprom’s Kharkiv Morozov Machine Building Design Bureau.