Staffing levels could be set to double at a Scottish armoured vehicle business which was bought out of administration nearly six months ago. Hullbased Martin Williams Ltd took over Penman Engineering near Dumfries in November last year. 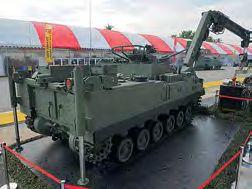 The number of employees at the time had fallen to just 14 but the new owners said that now stood at 67. Director Chris Williams said that if new work they hoped to secure was confirmed, then numbers would rise further.

The site on the outskirts of Dumfries employed about 140 staff before it went into administration.

The Bangkok Post claims that the Royal Thai Army will buy 34 armoured vehicles worth about two billion baht and another 11 VT-4 battle tanks from China, says army commander Chalermchai Sitthisat. The VN-1 will join the almost 200 Ukraine-manufactured BTR-3E1 armoured vehicles currently in service with infantry units. General Chalermchai said the army panel set up to consider the armoured vehicle purchase picked China as the preferred contractor over other candidates including Russia and Ukraine. The decision seems aimed at securing the two countries closer international relations via trading arrangements.