A good crowd attended the sale of the collection of ex-livestock haulier, the late Norman Jones, at Ludlow on Saturday, September 3. The auction was jointly conducted by H JPugh & Co of Ledbury and Welshpool Livestock Sales.

The main attraction was the dispersal of 50 crawler tractors of various makes and eras, collected over a period of some 20 years, all in very good condition with many having been imported by Norman from the US. 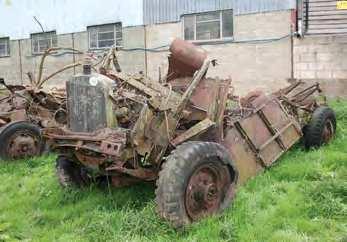 This is what remains of an ex WD Bedford QL, it sold for £650
TOM BOLTON

Tucked away on the edge of the field away from the crawlers though were four lorries or rather the remains of four lorries. These were all described as ‘hedgerow’, which in auctioneer parlance comes well below ‘restoration project’ and ‘winter project’.

The best of these was a pre-war Morris Commercial, less good was a Ford 4D, but the interest for military enthusiasts was a flat front Bedford tipper and Bedford QL four-wheel drive, the latter complete with engine and gearbox and a spare axle.