With the Paras in Helmand 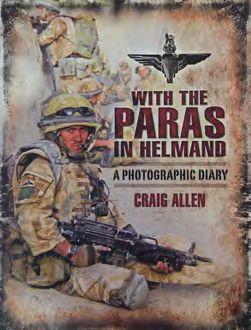 The publisher’s information about this book describes it thus: “Craig Allen, a Paratrooper for 29 years, returned to 2 Para as a reservist and unofficial photographer for the Battlegroup’s dramatic 2008 Tour in Helmand. As both a respected soldier and photographer, he had unrivalled access to the fighting and moved from area to area following the action. Every evening he wrote up his experiences and those of the men he was with, whose trust he had as ‘a member of the club’.

He had a ringside seat to a very costly summer tour, with the Taliban proving themselves worthy enemies to even the most elite British Army soldiers. His story tells, in superb action photographs and no-nonsense prose, of the hardships, courage, fears and cost suffered by front line soldiers over prolonged periods. He captures the colour of life and death in Afghanistan for both combatants and the luckless civilian population caught up in this vicious spiral of war.”

That sums the book up very well, and I am more than pleased to add this book to my collection especially as it was given to me by the author who, I am happy to say, is one of the new names in the team of CMV magazine contributors.

Verdict: Of the Paras in Helmand in a FOB, Allen says in this book, “Any man who spent six months living in these conditions and facing down the enemy every working day was a hero in my eyes.” That concisely sums up the nature of this campaign