The BSA B40 WD came from a distinguished line of military motorcycles and many are still performing well in civilian roles today, like this example owned by Haydn Waldron in West Yorkshire. While not the most ostentatious conveyance the British Armed Forces have ever deployed, the B40 WD certainly proved itself a trusty, if humble, workhorse.

Post-war, the British Army’s motorcycle holdings included US built Harley-Davidsons as well as a fleet of BSA M20s and Matchless GL3s but none of these were modern enough to take the armed forces through the cold war years. Interestingly, unlike the Land Rover Half-Ton Lightweight, which was developed specifically with the Rover Company to meet the MOD’s needs as the Cold War simmered in the 1960s, dispatch riders would come to rely on a model which had been introduced first as a civilian motorbike with limited off-road capability and which was then adapted for military use.

The B40 Star was introduced by BSA in 1960, an easy to maintain unit construction single-cylinder 343cc engine in a light and easily manoeuvrable motorcycle.

Even the Automobile Association bought a few to replace their BSA M21s though it certainly wasn’t the workhorse they needed for sidecar work and found it useful only for solo riders.

Civilian production of this model continued until 1965 with a few modified for trials competition and others for racing. A photograph of a prototype WD version appeared in promotional material for the army in1965, complete with supports for pannier bags. It was, as the Defence Council technical specification Data Summary cites in 1968, “based on the commercial components of the BSA B40 model”.

When modifying the civilian B40, the armed forces required easy maintenance and offroad capabilities. They chose the frame of the competition model together with a detuned B40 competition engine a close-ratio gearbox. Older design front forks were given rubber gaiters and the front brake from an older model was used with a 20in wheel rim. The front was shod with 3.00x20 Trials universal four-ply rating tyres while the rear was given the same type, 3.50x18 size, equipping the bike for off-road use.

Also, to make field servicing and roadside repairs easier, the petrol tank was of a similar layout to the 1950s Gold Star, in that the right hand fuel tap is set forward to make room for the battery, which in turn is situated above the gearbox. A butterfly-type Amal carburettor was used instead of the normal Amal Concentric.

The B40 was given a quickly detachable rear wheel and other features included a fully enclosed rear chain guard and 12-volt electrics to facilitate radio use. With the older, sturdier components, the weight including panniers was160kg while the civilian B40 tipped the scales at 130kg. Apart from small changes over the four-year production run, for example moving the speedometer from the headlamp shell to a separate item mounted on a bracket, the B40’s specification remained the same until the end of production in 1971.

Research has suggested that the total number of B40 WDs supplied to the British Armed Forces was 3,087. Initially, they ordered 15 motorcycles including prototypes for test purposes and must have been impressed as they then ordered a further 1,120 in 1967. This contract was followed by a further six orders of GB models for the army specifying a total of 2,931 machines in all.

Meanwhile the RAF ordered 135 motorcycles and the Royal Navy 34. A further order was placed with BSA for an additional 235 machines in 1971 but the company was unable to fulfil this order, the early 1970s being difficult times for the British motorcycle industry. For the first main batch, the military-stamped brass plate denoting the contract batch number was allocated randomly and did not correspond to the BSA’s frame number. However, the later, smaller contracts did and for these it is easier for restorers to trace the motorcycle’s provenance. 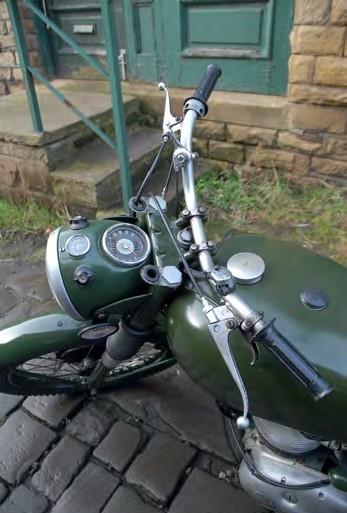 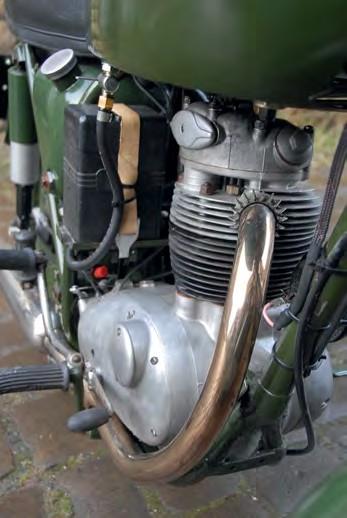 Even the battery box, retained by a canvas strap is quick to access and facilitate battery replacement in the field

Haydn’s B40 WD, acquired in 1989 after the motorcycle had been discharged from the army and registered with the DVLA in 1977, was bought as a cheap and sturdy runabout. The brass plate on the nearside of the headstock gave important clues to its history and Haydn discovered that it was a Mk 1 and one of the first batch of just over 1,000. Busy with other bikes, he sold it to a friend in 2006 and as so often happens, bought it back in 2012. By now it needed considerable work to restore it to good order and it was another year before it would see the road again.

Used by British Armed Forces, Australia, Denmark, Jordan and others

Wheels 20in front 18in rear

Width 29.5in across handlebars 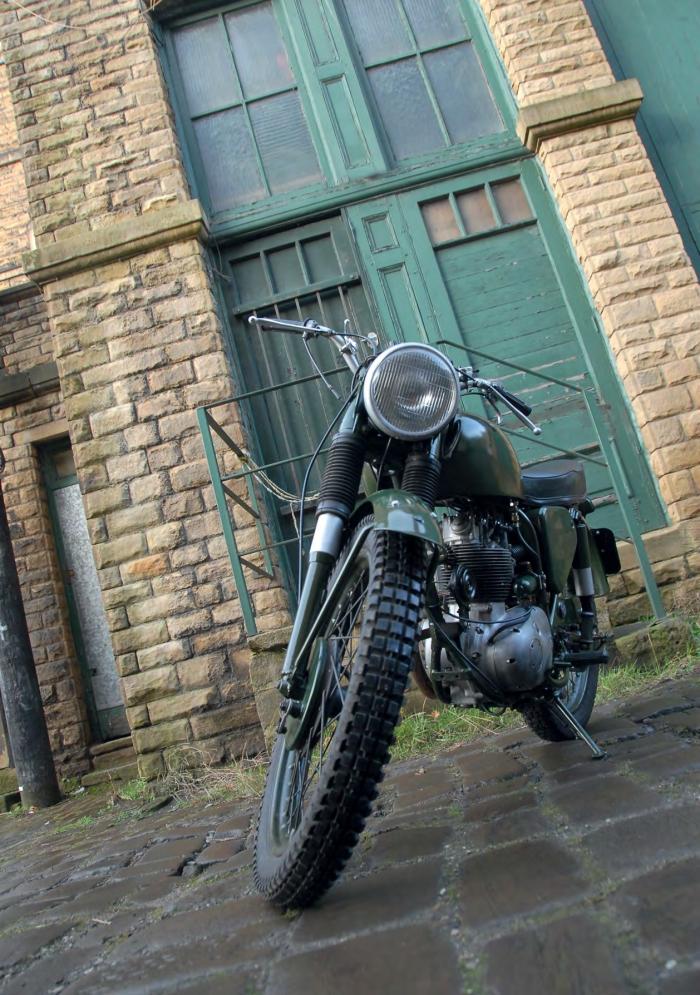 Haydn has ensured that the correct, universal trials tread tyres have been fitted 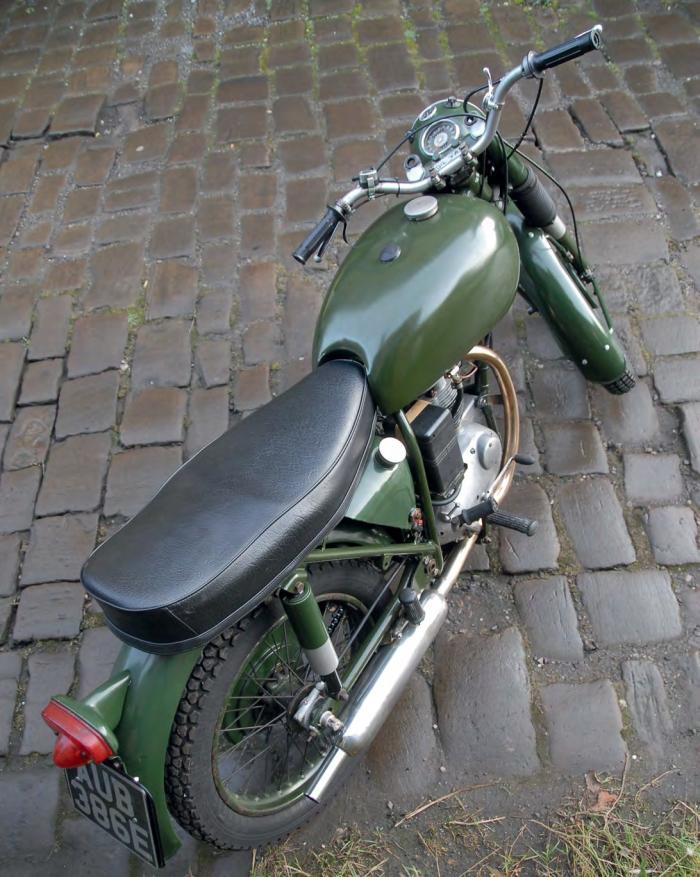 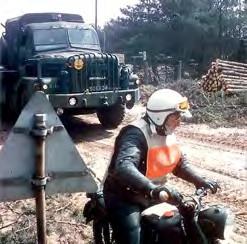 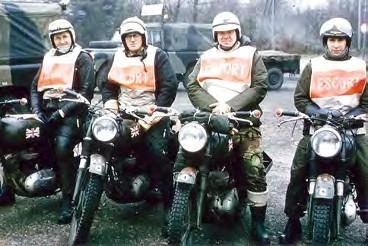 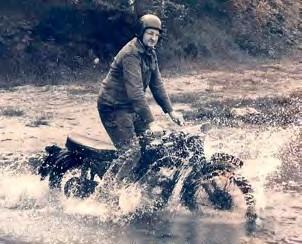 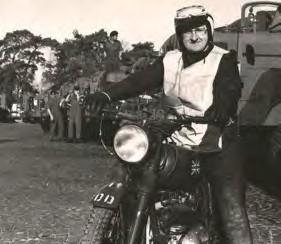 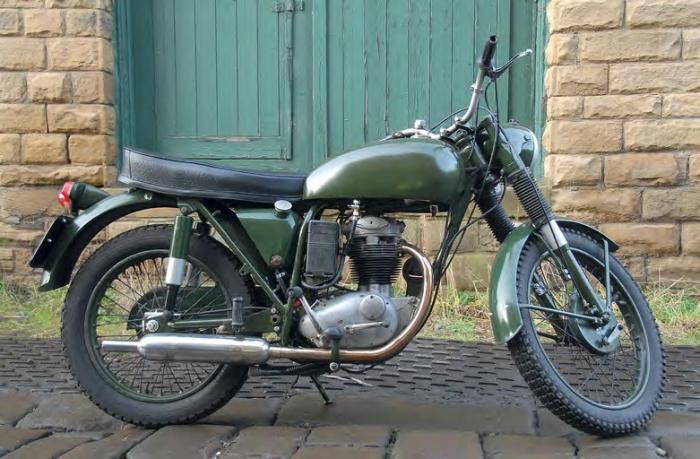 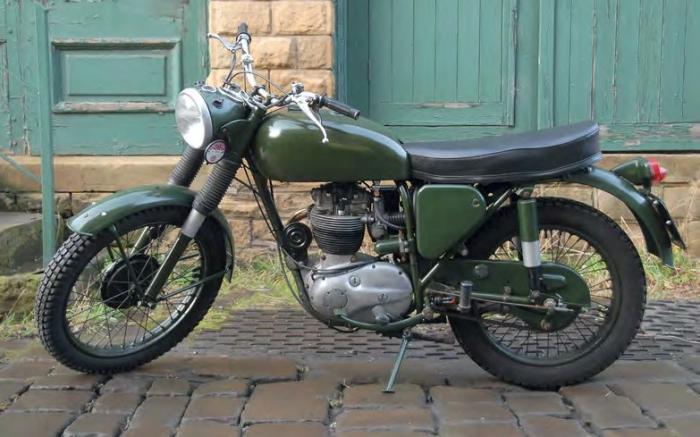 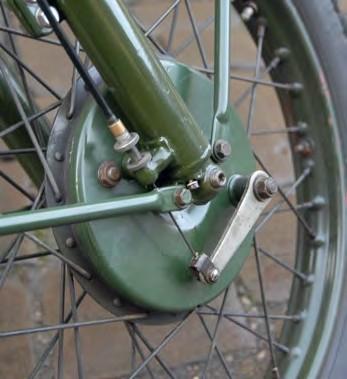 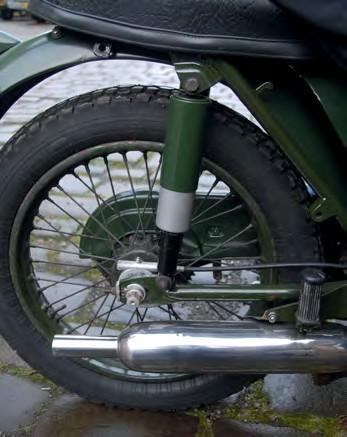 An older-style drum brake and casing was easier to maintain

The 18in rear wheel is quickly detachable for ease of maintenance

Haydn’s first task in restoring the B40 WD was to attend to the engine. The cylinder head was sent away to be given new valves and seats.

The head returned, the bike began burning oil first time out and once stripped down Haydn saw the work had not been completed adequately so he repeated the job himself, replacing piston rings and valve guides while he had the engine apart. He replaced, ignition coil, all seals, fuel taps and fittings.

There was little left untouched by 20all round.

The frame, shock absorber tops, tank, headlamp casing brake plate, fork shrouds and other parts were refurbished with powder coating and careful attention was paid to painting the cycle parts in a correct olive shade.

The powder coating on the tank protects it and has given the surface a slight tooth which has resulted in a pleasing low sheen. To complete the finish, the seat was professionally covered.

After several visits to the DVLA in Leeds, taking pictures of the matching frame and engine numbers to convince them, Haydn managed to have an age-related number allocated to the B40 WD. In 2014 he decided to rewire it and after further work it would now pass any mechanical inspection with flying colours; a credit to its former military life.

Lee Mitchell for information on the BSA B40 WD www.bsawdb40.com

To research the history of your own B40 WD contact the Royal Logistics Corps Museum. 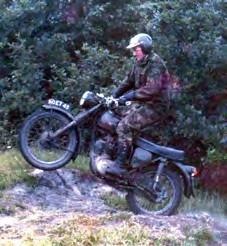 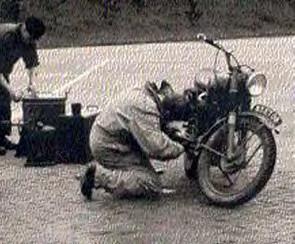 B40 WDs on the Rhine

FROM THE FAR LEFT: Marshall Greer on a BSA B40 350cc motorcycle leading an Antar Mk3, named Arrabella along a forest track Germany 1974; In Germany 1974, motorcycles ensured that BAOR units did not become muddled particularly on major exercises as there was often a set time allocation for the use of roads by military traffic and no allowances for losing the way. Left to right; Marshall Greer, George Dadge (now deceased) Dick Taylor and Charlie Farmer; Marshall Greer fording a river in Germany on his B40WD mid 1970s; Marshall Greer was a B40 WD rider with the BAOR in the 1970s. He now has a web page where he posts archive photos of his time with the army in Germany at www.the-antar.co.uk; Marshall Greer testing the off-road capabilities of the B40 WD in the mid 1970s; Checking over a B40 WD at a harbouring area while food is prepared; Germany 1975