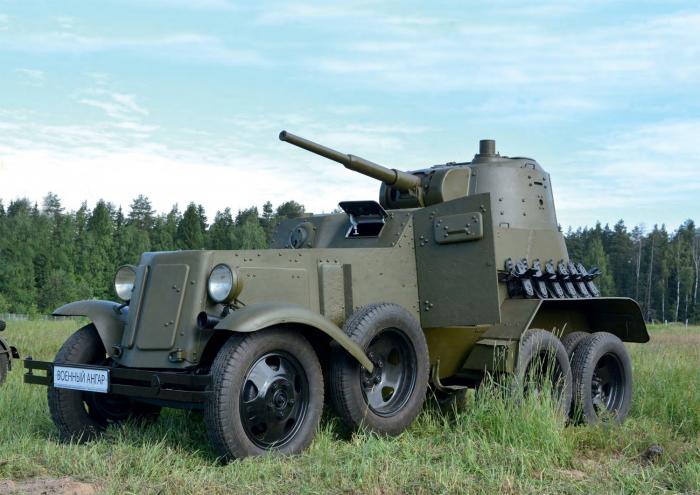 This BA-10A, rebuilt from a wrecked hull, was displayed at the Motors of War show held in the village of Chernogolovka near Moscow in late June 2014
(PHOTO CREDIT: ANDREY AKSENOV) 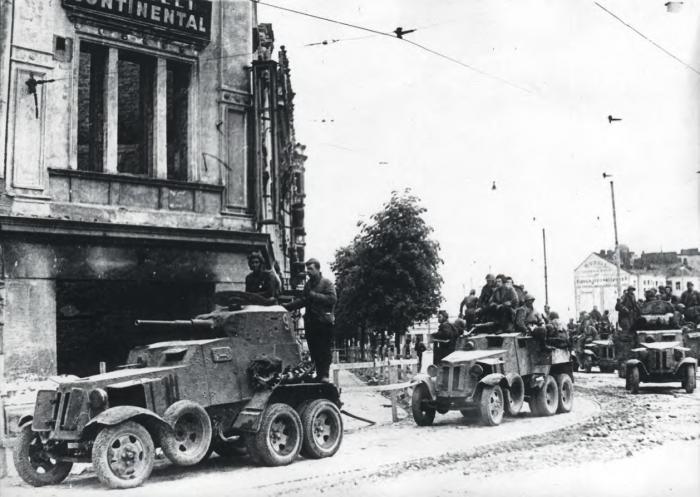 The BA-10 was the final production model of the BA series of armoured cars that had begun with the BA-I in 1932. It was also the standard medium armoured car in service with the Red Army at the outbreak of the war on the Eastern Front on June 22, 1941.

The majority of BA-10 armoured cars were destroyed in the opening months of the war, and as such, most surviving photographs show them in various states of disrepair. 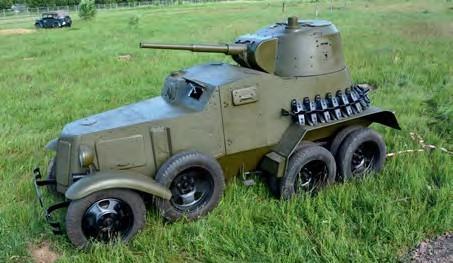 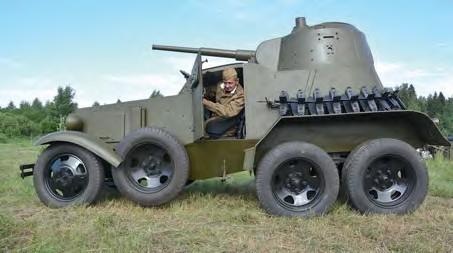 It had a distinguished, if short, combat career in the years leading up to total war in 1941, and small numbers survived in Red Army, and also in German and Finnish, service, throughout World War Two.

At the end of the civil war following the Russia Revolution in 1917, the fledgling Red Army possessed a grand total of 243 armoured vehicles of all types, the majority of which were local modifications based on imported chassis or captured vehicles.

The number of vehicles in service actually fell off during the 1920s as the inherited vehicle park disintegrated and vehicles were incapable of further repair and return to service.

It was only at the end of the 1920s that the Red Army received its first indigenous armoured car type, the BA-27 (Brone-Avtomobil - literally armoured car - M-1927) that had been developed in 1926-27 at the armoured department within the Moscow AMO (later ZiS) plant.

The BA-27 was a light reconnaissance and infantry-support vehicle, mounted on the 4x2 AMO-F-15 truck chassis, and armed with a turret- mounted 37mm PS-1 gun. It was series produced in small numbers between 1928 and 1931, and gave the Red Army its first experience with the deployment of a domestically produced armoured car. Approximately 200 vehicles were built in total. The BA-27 light armoured car was the first generation of its kind used by the Red Army. It would be followed in the years ahead by the FA-I, FAI-M and later the BA-20 and BA-64 series, all of which were primarily used as reconnaissance and communications vehicles. 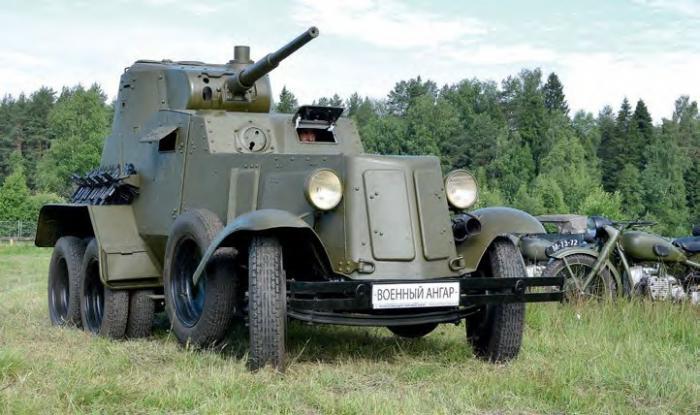 In the meantime the Soviet Union pursued the idea, popular during World War One and the civil war years, of mounting relatively heavy armament on wheeled armoured vehicles, resulting in the development of a family of medium armoured cars, mounted on 6x4 truck chassis and armed with turret mounted tank guns. These were also used as reconnaissance and communications vehicles, but usually employed as infantry support vehicles, effectively wheeled tanks, with varying degrees of success depending on the year and the opponent encountered.

The first of these from the Soviet Union was the D-13, developed at the Izhorskiy plant under the direction of N I Direnko and based on the imported 6x4 Ford-Timken chassis.

A small series was built primarily for evaluation trials purposes, but the D-13 was deemed too complex for series production with available machine tooling and labour skills.

The design concepts used on the D-13 were however used on another Izhorsk-developed medium armoured car, the BA-I (BroveAvtomobil- Izhorskiy), developed by a team under the direction of A D Kuzmin. Based, like the D-13, on the 6x4 Ford Timken chassis, the BA-I was technologically advanced for its time, featuring an all-welded hull with a 4-6mm armour basis, and also armed with a turret-mounted 37mm PS-1 gun as used on the BA-27. There was a co-axial machine gun in the turret and a secondary ball mounted machine gun located in the front of the fighting compartment to the right of the driver.

The rear of the fighting compartment was lower than the front section where the driver-mechanic was located, maintaining the lowest possible vehicle silhouette, despite the large rear mounted turret with its tank gun armament. The five- tonne BA-I had reasonable performance for such a large and heavywheeled vehicle, with a maximum road speed of 63km/h and a range of 150km. 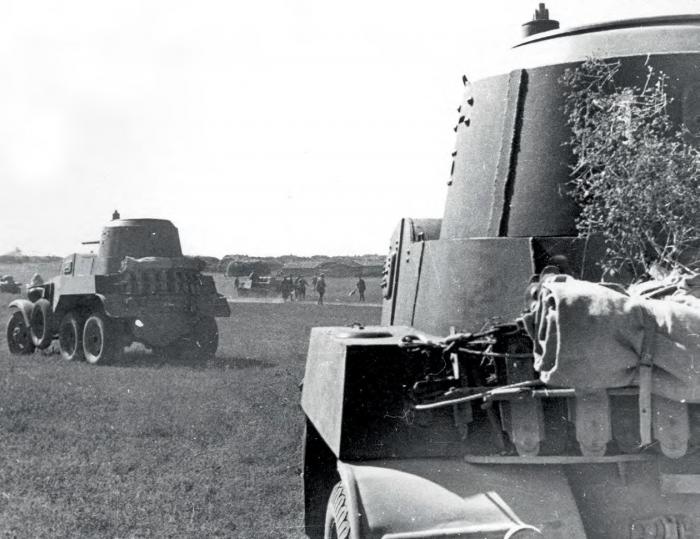 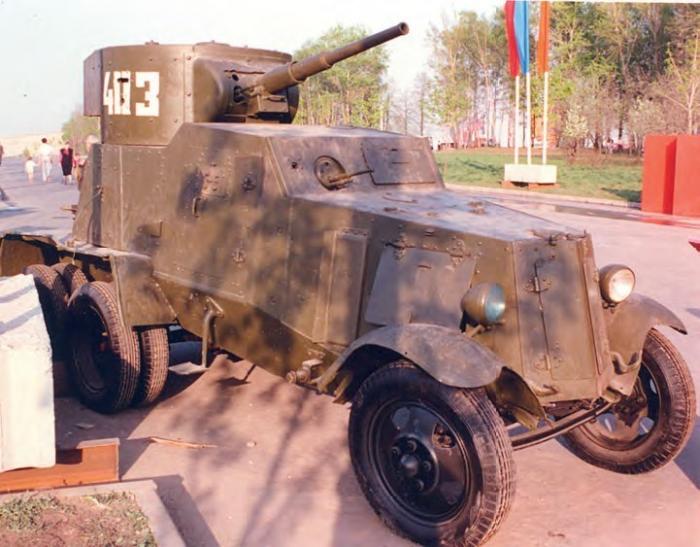 The BA-I was, from 1934, replaced in production at the Izhorsk plant by the modernized BA- 3. The main improvement was the installation of the same turret and armament as was then being fitted on the T-26 M-1933 light tank.

The new two-man armoured steel turret was armed with a 45mm M-1932 (20K) tank gun. The ammunition complement was greatly increased from the 34 37mm rounds of the BA-I to 60 rounds of 45mm located within the BA-3. For ease of production, the BA-3 returned to a combination of riveted and welded construction. Performance remained similar to the BA-I, though the introduction of band type ‘overall’ tracks, fitted over the rear wheel pairs and kept in place by track horns running between the double tyres on the rear axles, improved traction in soft ground.

In the early 1930s the GAZ plant located at Gorky had begun production of the GAZ-A passenger car and the 4x2 GAZ-AA 1.5 tonne truck, both based on Ford prototypes. These vehicles werejoined in production in 1935 by the 6x4 GAZ-AAA, and the chassis replaced the earlier Ford Timken chassis on all subsequent Soviet medium armoured cars.

The BA-3 was later modified as the BA-6, which featured the same armour layout, armament and ammunition complement as the BA-3 but was slightly different dimensionally due to the new chassis on which it was mounted. The BA-6 weighed just over five tonnes, slightly more than its predecessors. Performance was unaffected as the BA-6 was powered by a GAZ-AA engine developing 40bhp as used in both the GAZ-AA and GAZ-AAA trucks. The BA-6 closely resembled the earlier BA-3, but employed greater use of welded armour and didn’t have a door in the rear of the fighting compartment. 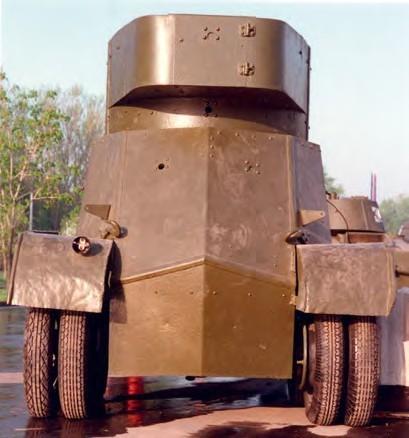 The BA-6 was also the first medium armoured car to be fitted with ‘GK’ bulletproof tyres.

The BA-6 was series-produced at the Izhorsky plant from 1936-38 on chassis supplied by the GAZ plant in Gorky, with 386 being built in total, making the BA-6 the most common of the BA medium armoured car series, second only to the later BA-10.

A major modification of the BA-6 was undertaken at the Izhorsky Plant design bureau in 1936, resulting in the BA-6M, which, though similar in appearance to the BA-6 had a 600mm shorter chassis, reducing internal fighting compartment volume and thereby the overall weight of armour.

It was fitted with the improved GAZ-M1 engine developing 50bhp, and had a series of other modifications including a new transmission, a 52-litre fuel tank, strengthened front suspension, improved brakes and improved fighting compartment fume extraction. 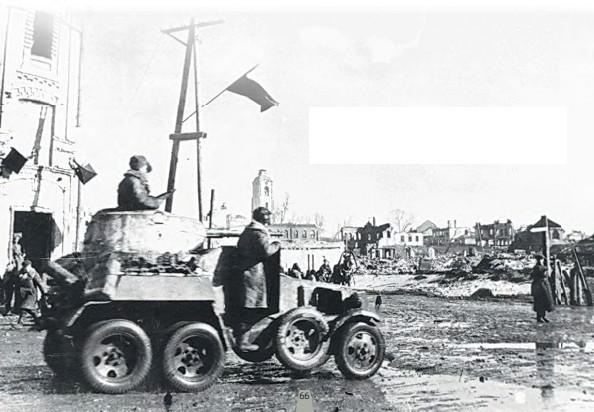 The most noticeable change however was the use of a new conical welded steel turret in place of the much larger T-26 M-1933 tank turret of the earlier BA-6.

After prolonged trials with several prototypes, the BA-6M was accepted for series production in April 1937, after the elimination of some defects discovered during evaluation. The armoured car entered series production as the BA-10.

The BA-10 series was armed with a 45mm M-1932 tank gun (later replaced with the M-1934), with a 7.62mm DT machine gun mounted co-axially in the turret and a secondary machine gun mounted in the front of the fighting compartment next to the driver. The vehicle had an ammunition complement of 49 45mm rounds and 2079 7.62mm rounds. The BA-10 originally had a combat weight of 5.12 tonnes, rising to 5.50 tonnes on the BA-10M, with a maximum road speed of 53km/h and a range of 300km, which was double that of the original BA-I. Commander’s BA-10 series armoured cars were fitted with a 71-TK-1 radio. 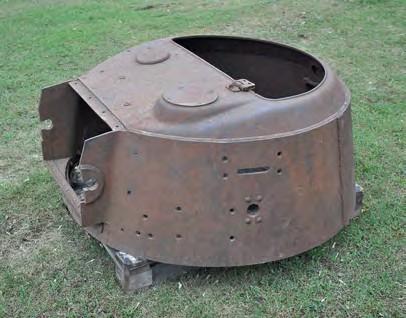 The BA-10 featured a conical welded turret, as seen here at the Technical Museum, Krasnogorsk, near Moscow

The BA-10M now had a combat weight of 5.50 tonnes, some 10% heavier than earlier variants, but with no loss in performance due to increases in engine power output, and with significantly increased range. In service the ‘overall’ tracks introduced earlier were often stowed on top of the wheel-guard mounted fuel tanks.

The planned production was in fact achieved, with 975 BA-10s (actually BA-10As) produced at the Izhorsk plant in 1940. In total, 3331 BA-10s of all types were built from 1938-1941. The Izhorsk plant was evacuated in September 1941 to the premises of the Baltiskiy Plant in Leningrad, rather than by rail to east of the Ural mountains where most evacuations, including plants being evacuated from Leningrad, were heading. A small number of BA-10Ms were built in Leningrad, the last in November 1941, with the BA-10 being used in combat in small numbers during the Siege of Leningrad.

Several specialised prototypes of the BA-10 were produced, including the BA-22 armoured ambulance, developed at the Vyksunskiy DRO Plan in 1938, which could evacuate 10 seated wounded or 12 on stretchers.

BA-10 ZhD and BA-10M ZhD “Zheleznaya Doroga” (literally steel road) rail versions of the BA- 10 and BA-10M were produced. These vehicles had their standard road wheels replaced with flanged steel railroad wheels and were used as armoured scout vehicles for armoured trains. A prototype with additional concrete armour was developed in 1940, designated BA-10Ts.

The BA-10 armoured car had its ‘first blood’ during the battles of the Khalkin Gol against Japan in the Far East, where 203 vehicles were engaged in the first week of combat in the region. The vehicle performed well against Japanese infantry, artillery and light tanks during battles in the region of Khalkin-Sumye and Debden-Sumye.

The BA-10 was widely used by the Red Army in the 1939-40 ‘Winter War’ against Finland, and during the invasion of Poland. The vehicle was used during World war Two for reconnaissance duties, and also as an infantry support vehicle, accompanying infantry in attack formations in a similar manner to a light tank.

As with most Soviet armour, the BA-10 suffered massive losses against advancing Wehrmacht forces in the late summer and autumn of 1941. The BA-10 was however relatively powerfully armed for an armoured car, the 45mm M-1932/34 tank gun being the same gun as used on the T-26 light tank and the BT fast tank at a time when most German tank and anti-tank guns were of 37mm calibre. The BA-10 was thereby actually a direct match for German light tanks, with some rare successes. On June, 22 1941, the first day of the war, six BA-10s commanded by Lt. Surovtsev ambushed and destroyed six German light tanks. In another documented action, 19 whitewash camouflaged BA-10s engaged German forces on January 18, 1943 in an infantry support function against German forces in the town of Schlisselberg east of Leningrad, resulting in the destruction of several enemy guns and the capture of 120 German prisoners during a combat engagement that lasted ten hours. 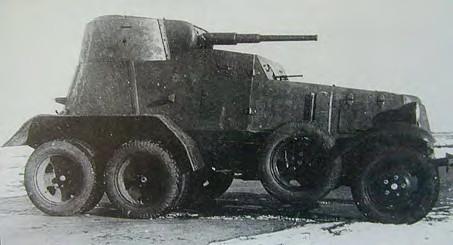 The BA-6M introduced the smaller, conical turret that distinguished the later BA-10 series from the earlier BA-3 and BA-6, both fitted with the same turret as the T-26 M-1933 light tank. The BA-6M was effectively the prototype for the production BA-10 series (MBARYATINSKY) 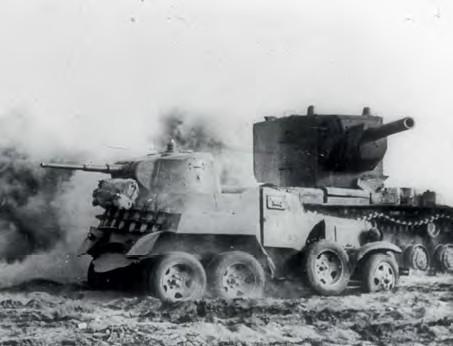 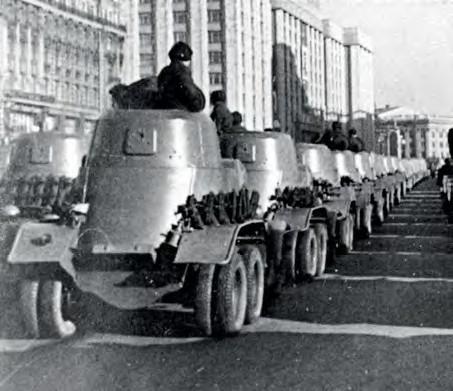 A column of BA-10s lined up on Manezh Square, Moscow, awaiting a military parade 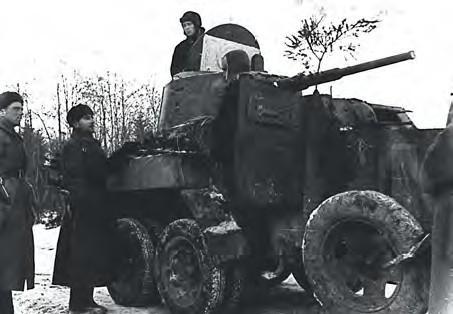 A BA-10M in Red Army service 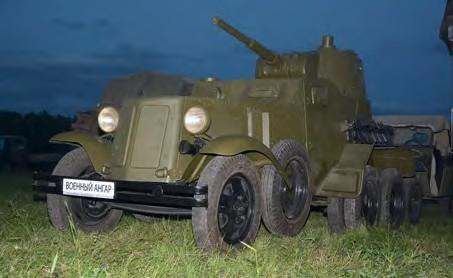 Nightime shot of the rebuilt BA-10

The Finns captured a significant quantity of BA-10s, which were used against their original owners by the Finnish Army during the Winter War and later Continuation War. The Finns had 24 vehicles in service on June 1, 1943, and used them until the end of the Continuation War in 1944. A few were modified with a Ford V-8 engine developing 95bhp and used post-war for training purposes. One was converted to a mobile crane in 1962, the vehicle remaining in service until as late as 1978. 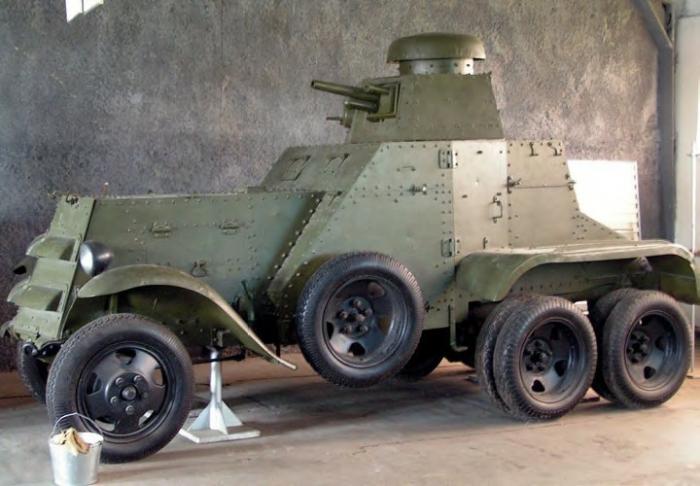 The BA-27M was the first Soviet heavy armoured car. The sole survivor is located at the NII-38 museum at Kubinka 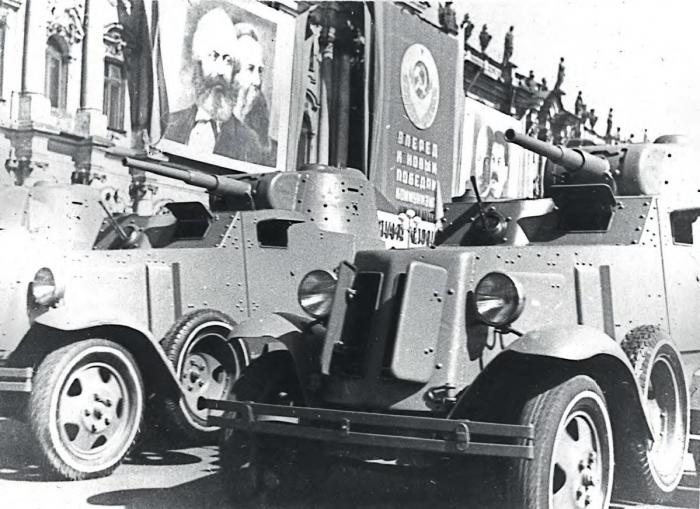 BA-10s during a Red Army parade