One of 617 Squadron’s Lancaster Is modified to carry the Tallboy and Grand Slam bombs. Taken at Woodhall Spa in 1945. (M HODGESON, VIA ANDREW THOMAS) 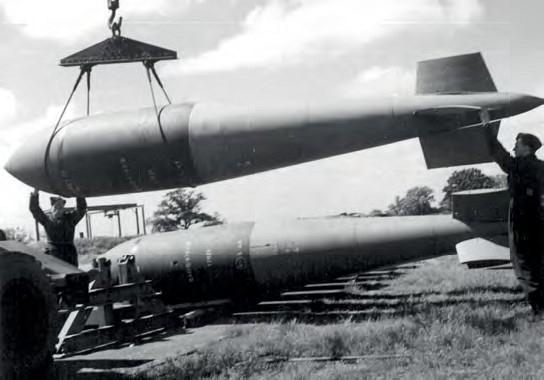 PREPARATORY WORK to widen and dredge the Piast Canal, Świnoujście has unearthed an unexploded Tallboy in northwest Poland. Workers discovered the giant bomb near the Świnoujście-Szczecin fairway, 110yds (100m) from the Karsibór ferry crossing, in late September.

The Polish Ministry of National Defence confirmed to Britain at War that the device is a Tallboy. Divers from 12. Dywizjon Trałowców (12th Minesweeper Squadron) of the Polish Navy completed a series of reconnaissance dives to identify the bomb and assess its position. Lieutenant-Commander Grzegorz Lewandowski, of 8th Coastal Defence Flotilla (12. Dywizjon Trałowców’s parent unit), told Britain at War on October 9 that the Tallboy is deeply buried beneath the canal.

Sources confirm it is the largest unexploded device found in Poland and it is also speculated to be the largest individual piece of unexploded wartime ordnance found since the recovery of another Tallboy during renovation works on the Sorpe Dam, Germany, in 1958.

The Tallboy – officially Bomb, Medium Capacity, 12,000lb – was developed by Sir Barnes Wallis, inventor of the famous ‘Upkeep’ mine (bouncing bomb). It was so large that the Lancaster heavy bomber was the sole type in RAF service able to carry it, and Tallboy was operationally deployed only by 9 and 617 Squadrons. Intended for used against hardened targets that were resilient to bombing, such as the U-boat pens along the French and Dutch coast, Tallboy ended up being used on more than 30 raids.

On some raids, such as the Arnsberg Viaduct, in Germany, the bombs were used in conjunction with the even larger Grand Slam. Famously, three raids using Tallboys were conducted against Tirpitz, the first rendering her unseaworthy, with the third, Operation Catechism, finally sinking the German battleship. It was not the only ship to be attacked with the Tallboy, however.

On April 16, 1945, eighteen 617 Squadron aircraft sortied to Swinemünde, Germany, to attack the pocket battleship Lützow. The flak was intense with all but two bombers damaged and one shot down – 617’s last loss of the war. Nevertheless 15 aircraft penetrated the screen. Several Tallboy and 1,000lb bombs were dropped with a near miss splitting Lützow’s hull, sinking her at her moorings. RAF aerial reconnaissance photograph showing the aftermath of the raid on the Lützow as she berthed in the Kaiserfahrt, today the Piast Canal.

The attack on Swinemünde – today Świnoujście, and now in Poland – is when the discovered Tallboy was dropped. A crisis meeting considered several options, but Lieutenant-Commander Lewandowski confirmed to Britain at War that it had not yet been decided how to proceed. One Polish newspaper speculated navy divers may raise the bomb and transport it to a training ground for disposal. However, at more than 5 tons, 21ft (6.4m) long and containing 5,200lb (2,400kg) of Torpex filling, the size of the bomb and its depth makes safe disposal difficult. It presents a unique and extraordinary challenge for the Polish Navy.

According to one defence commentator, the Tallboy is in good condition and it is thought the Torpex could be heated, melted and drained – a similar process to how the bomb was filled. Therefore, the concern is more on the fuses and time delays, which are set into a small charge of TNT and should have triggered on impact.

Any effort to move or make safe the device is likely to require the complete evacuation of Świnoujście (population 41,500) and its surrounds, admitted Agnieszka Muchla-Łagosz, of the local provincial offices.

The discovery forced the Port of Świnoujście to close, but the shipping channel running through the canal, which runs between Świnoujście and the Szczecin Lagoon, remained open. As the device presents a threat to vessels, its position has been marked.

The Piast Canal is thought to be littered with unexploded ordnance, this Tallboy being the fourth large device discovered there since July 2019. A British airdropped Type A Mk.VI mine was disposed of in August as was a large German sea mine.

What was thought to be a British Type A Mk.IV mine, also airdroppable and intended for use in inland waterways, was made safe in July.