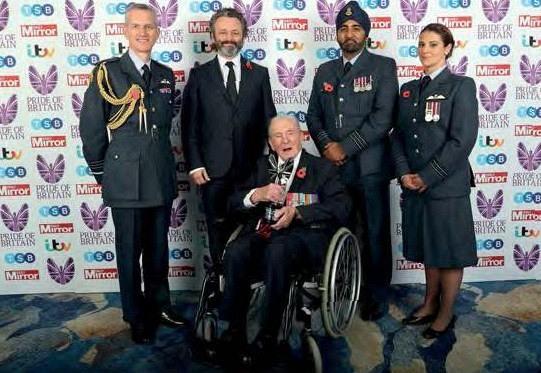 THE LAST surviving British Dambuster, George ‘Johnny’ Johnson MBE DFM, was given an award at the Daily Mirror’s Pride of Britain Awards. Presented by actor and campaigner Michael Sheen, Johnson’s award recognises all men and women of the RAF in its 100th anniversary year. The Dambuster was joined on stage by Wg Cdr Manjeet Ghataora, Flt Lt Kerry Bennett and the Chief of the Air Staff, Air Chief Marshal Sir Stephen Hillier, to represent the RAF.

Johnson, 96, from Hameringham, Lincolnshire, is the last British member of the 617 Squadron aircrew made famous as the Dambusters during the Second World War. The Mirror’s annual Pride of Britain Awards, launched in 1999, recognises people who have acted bravely or extraordinarily in challenging situations. This year’s ceremony, hosted by Carol Vorderman, took place at the Grosvenor Hotel in London on 29 October and was later televised.