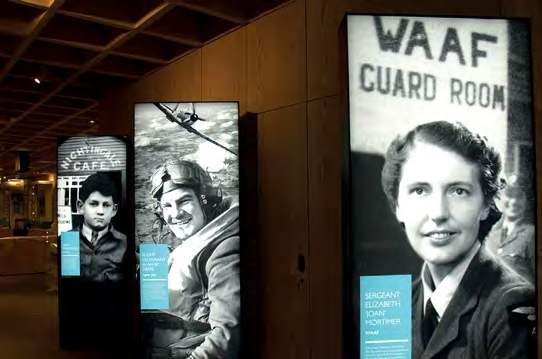 The large-scale backlit panels at the start of the exhibition area.

A FABULOUS multimillion-pound museum is set to open at the former Battle of Britain airfield at Biggin Hill. Its remit is to tell the stories of the people who served, worked or lived at the station, and it does that with considerable style, as Nigel Price reports.

After years of planning, fundraising and hard work, phase one of the new Biggin Hill Memorial Museum in Kent will open to the public on 2 February. This first part of the centre at the south London airport has taken 16 months to construct, with organisations and individuals having given over £5.3 million to ensure the dream could become a reality.

Building and conservation work started in September 2017, following a £2m award from the Heritage Lottery Fund (HLF), £2m from central government and grants from Bromley Council, in addition to other fundraising. The total amount includes a £1.5m endowment fund to support the future management of the museum. Generous donations continue to be received towards developing phase two – the learning centre and memorial wall. The museum tells the story of Biggin Hill through the experiences of the people who served and lived there. It also secures the future of St George’s RAF Chapel of Remembrance, the moving memorial to the 454 pilots killed flying from RAF Biggin Hill sector during the Second World War. The Grade II-listed chapel, which was built in 1951 at the behest of Sir Winston Churchill, features a wooden floor made from slats of sectioned propeller blades and 12 stained glass windows designed by Hugh Easton’s studio. It has been painstakingly restored to its original 1950s design and will continue to serve as a place of worship and pilgrimage. 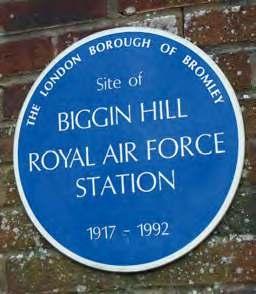 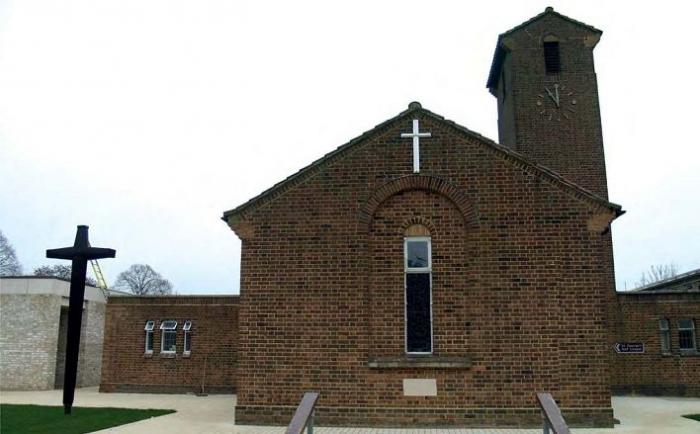 The St George’s RAF Chapel of Remembrance in January this year. (ALL IMAGES VIA NIGEL PRICE UNLESS NOTED)

Access to the museum is from the main airport road via a new entrance, and there is ample car parking available. The centre has been designed with step-free access, and it’s wheelchair friendly. Visitors are welcomed into the reception area, with a well-stocked gift shop, cafeteria and toilets on the left, and main exhibition area on the right. A small admission fee is charged, which obviously helps to pay the centre’s running costs and sections focusing on the aerodrome’s early years, serving at the station, community life and remembrance. The diverse and unique array of objects on show bring the personal stories to the fore, from a deactivated German 50kg unguided bomb, the Biggin Hill ‘scramble’ and ‘victory’ bells, to a wooden table from a local pub that fighter pilots carved their names into. Other items include a child’s gas mask and box, an escape crowbar from a Spitfire, a cockpit clock from a Messerschmitt Bf 109, a Browning machine gun, an aircrew logbook, fragments of pilots’ maps, compasses, uniforms, hats and flying jackets.

Although the rarer and more delicate exhibits are shown in cases, there are plenty of items contributes to its upkeep. (The main site and chapel are, however, free to enter.) The entry cost includes the loan of a computer tablet/ digital guide for the duration of the visit that explains more about items on display, and includes videos and other information.

Inside the main hall the visitor is greeted by large backlit display panels that introduce several typical people who would have had a strong link to the station during the Battle of Britain – a WAAF (Sgt Elizabeth Mortimer), a pilot (Flt Lt Al Deere) and a local schoolboy (Geoff Greensmith). Opposite is a wallmounted large-scale map of Biggin Hill circa 1946, enabling visitors to orientate themselves with the site. These introductory items set the themes for what is to follow – people and place.

As the hall opens out, displays fall into various timeline-linked that can be touched, picked up or even tried on, often backed up by multimedia displays. Archive film is used extensively, and to good effect.

A particularly impressive section is the display entitled A Family in War. It tells the powerful story of Harry and Mary Simpson and their four children, who moved near to the station in 1940. Inspired by what they saw during the Battle of Britain two of the youngsters joined the RAF – Harry Jr into Bomber Command, Lilian into the WAAF. Harry Jr was lost when his Lancaster failed to return from a raid on Versailles on 7 June 1944. He had just turned 21. This extraordinary collection of artefacts, which was donated by Jean Simpson, the last surviving member of the family, is very thought provoking. What makes it even more extraordinary is that it was in real danger of being thrown away before the museum stepped in and offered it a home.

From here the visitor is guided from the new museum building and into the famous St George’s Chapel, with its unique RAF-themed stainedglass windows. This poignant building alone is worth the trip to Biggin Hill. It is, however, very much a working, religious centre, so access may be restricted at certain times.

Outside, the newly landscaped gardens showcase the chapel, as well as the Spitfire and Hurricane replica aircraft that serve as gate guardians.

Overall, the museum is very impressive. It isn’t the largest heritage centre by any means, but it’s a real gem, and a visit is highly recommended. https://bhmm.org.uk 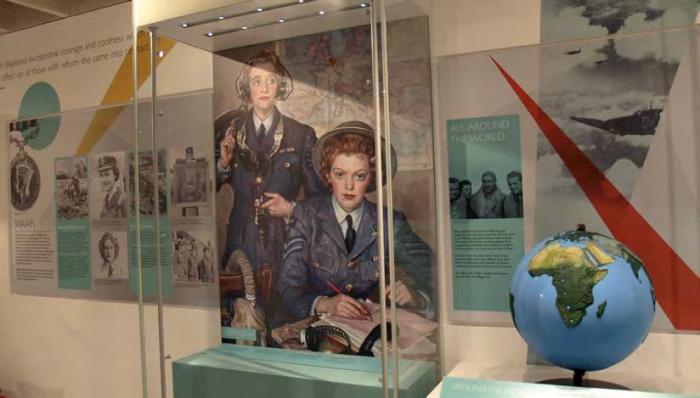 A display featuring the three WAAFs to be awarded a Military Medal (MM) for bravery at Biggin Hill during the Battle of Britain.

Museum director Jemma Davey explained the rationale behind the new displays to Britain at War: “The museum offers a new way of thinking about what it was like to be at Biggin Hill during wartime. It’s in people’s own words – what their experiences were, from interviews and archive records. It’s taken four years from concept to what people will see in the museum today. We’re really passionate about telling the stories of The Few, but also those of the many that supported them. We hope these stories will inspire generations and continue to remind us of the very best of the human spirit.” 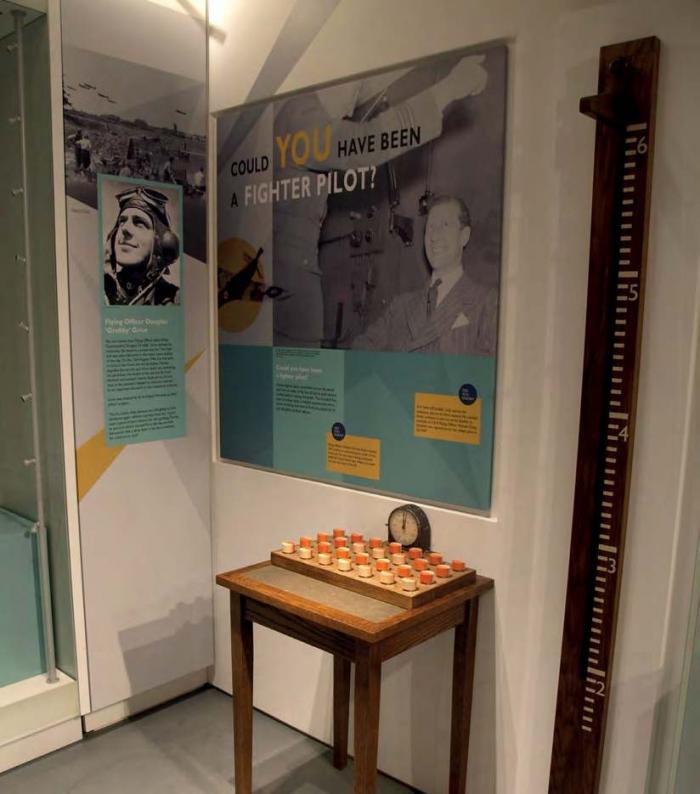 One of the ‘hands-on’ interactive displays.

Biggin on the ‘Bump’

Originally established in 1917 as a testing ground for pioneering developments in flight, Biggin Hill is perhaps best known as a Fighter Command station in the Battle of Britain. Part of a chain of airfields that protected the capital, RAF Biggin Hill was memorably described by Churchill as ‘the strongest link’. It was affectionately known as ‘Biggin on the Bump’ due to its hilltop location, and was operational until the late 1950s. The RAF finally moved out in 1992. Today, the airport is a busy hub of commercial aviation, and is also home to the Biggin Hill Heritage Hangar, with its fleet of airworthy Supermarine Spitfires. 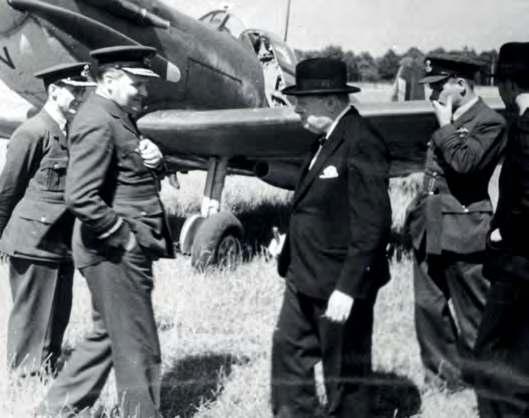 The museum is open Wednesday to Sunday, 10am to 5pm, with last admission being at 4pm. The site is free to visit, but there is a charge to view the exhibition area. This is expected to be £8.50 per adult, £4.50 per child and includes the use of a computer tablet. The museum is located on the border of the London Borough of Bromley and Kent, close to the A21. The sat nav post code is TN16 3EJ.

The Spitfire replica gate guard during the latter stages of the site’s landscaping.