Tank and maintenance crews from the 1st Battalion, 66th Armor Regiment billeted at Grafenwoehr Training Area, Germany, are giving their M1A2 Abrams main battle tanks a buffed-up look that improves the tanks’ overall defensive capabilities. The Abrams Reactive Armor Tiles are placed on both sides of the hull and turret to prevent penetration by various weapon systems, such as rocket-propelled grenades. The ARAT system adds protection while not inhibiting tank speeds.

Beefing up US armor serves as a deterrent to acts of aggression against NATO nations as the combat team rolls out stronger tanks to conduct training with allies throughout Central and Eastern Europe “Depending on what terrain you’re in, whether rural or urban, the purpose of angled tiles is for a blast to go down or upwards, allowing the impact to deflect outward rather than at the tank crew,” said Army 1st Sgt. Ryan Dilling, senior noncommissioned officer of Bravo Company, the first unit to install the tiles. The design enables the tiles to be repositioned depending on the situation. Dilling explained that if you have dismounts on the ground and they’re working in close proximity to the tank, you’d want to angle the tiles down so if there was a blast, it would go out and down to minimise the effect against soldiers nearby. But if you were in an urban environment and you had adversaries shooting from second or third storeys or rooftops and the tiles were activated, the blast would push out and upwards towards the threat. 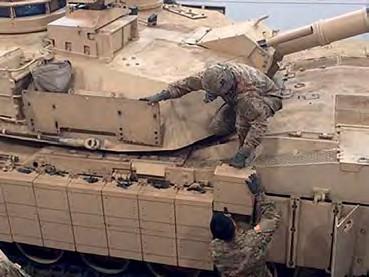