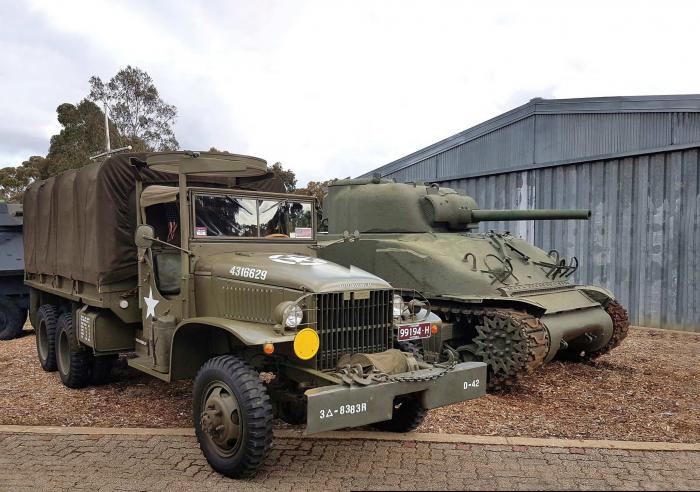 Jimy Sharp’s GMC proudly parks alongside one of three Sherman tanks at the Puckapunyal Tank Museum. The Sherman’s were used for trials during World War Two by the Australian Army

A serving soldier in the Australian Army, Jimy Sharp has, in his spare time, been restoring a 1944 GMC CCKW 353 longwheelbase 2 1/2 ton 6x6 truck. Jimy said that his interest in all thing’s military began while in his early teens and his time with the Australian Army cadets. He got to experience driving in an M113 armoured personnel carrier, using real weapons, operating radio equipment and much more, all of which led him to join the army.

Not long after his 18th birthday, Jimy said his goodbyes to family and friends and enlisted. “It was by far one of the best choices I ever made,” he said “During the past 13 years, I have had predominately an Infantry background. I hold no mechanical or electrical qualifications. The mechanical skills I have learnt are from the kindness of people in the hobby, studying many books and videos, and reading magazines like Classic Military Vehicle, which gets delivered to my address in Australia every month.”