The Red and Green Life Machine

Collectable Books On the Shelf 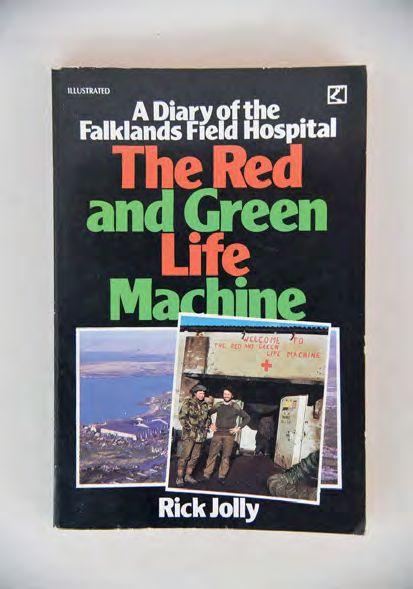 It’s hard to imagine someone’s desk diary becoming a gripping, ‘read-everyline’ war story but that is exactly what this book is. The author, Surgeon Commander Rick Jolly, was the Royal Marines’ senior medic for the Falkands campaign and, by his own admission in its opening lines, this book came from his 1982 diary. Perhaps because of that, its concise style and economy of language has the effect of transporting the reader straight to the South Atlantic winter. Each ‘chapter’ is a day, some are pages long, others a couple of paragraphs.

The book starts as preparations to a tight timetable are being made to get the British Task Force to sea and the realisation that it is all really happening; helicopter landing platforms being welded over the swimming pools on board the liners that are to act a troop transport and medical ships. Jolly and his team are assessing where they can establish operating theatres. As the ships sail south, preparations continue in many ways from training for the Paras about ‘rectal transfusions’ with predictable bawdy jokes in response. Jolly is at the briefing where Brigadier Julian Thompson famously said that the campaign ‘would be no picnic.’ 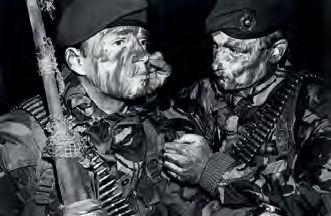 However it is when the medical teams are ashore that the book becomes breathtaking. With flashes of humour, Jolly details establishing the ‘Red and Green Life Machine’ in an abandoned shed in Ajax Bay near San Carlos, the scene of the landings. Red is the Paras and Green the Marines as they pool their medical resources In a calm and measured way, Jolly talks about an unexploded bomb that gets lodged it the building’s roof and the complicated medical procedures on wounded soldiers - from both sides. He continues to use the same calm tone as he describes the bureaucracy of transferring casualties to the SS Uganda hospital ship, about gas gangrene and removing a 7.62mm bullet from a casualty’s leg.

He talks of the tragedies suffered including the SAS men killed in a helicopter crash, the 2 Para casualties from Goose Green and numerous funerals after he’d certified the deaths. As the news emerges that the RFA Sir Galahad has been hit - there’s casualties among 16 Field Ambulance and numerous badly burned Welsh Guardsmen to tend to - it’s Jolly’s team that helps first. Obstructive bureaucracy from London half a world away shows that the scale of the disaster hasn’t been understood. By the time, Jolly gets to June 14, he’s recording details of Scots Guards and 2 Para casualties from Tumbledown and Mount Longdon respectively.

In the book, Rick Jolly quotes the Duke of Wellington in saying that the campaign was ‘a close run thing,’ and this book shows just how close.

(The book was originally published in hardback in 1983 by Century, shown is the 1984 Corgi paperback, and it was republished in 2007 by Maritime Books. An updated version - Doctor for Friend and Foe was published in 2012)