SIDNEY DAY bore a charmed life in two World Wars. Twice-wounded and captured during titanic struggles on the Western Front, he cheated death again two decades later on the Home Front when bombs destroyed his business. In between, the quiet, unassuming ‘citizen soldier’ was hailed a national hero for a display of bravery that beggared belief. Now, a century on, his remarkable saga of miraculous survival and magnificent courage made headlines all over again when his Victoria Cross medal group was sold in a Dix Noonan Webb’s auction, writes Steve Snelling.

Remembered as one of the most mild-mannered heroes of the First World War, Sid was one of thousands who answered Lord Kitchener’s call to arms in 1914 and quickly proved himself an outstanding soldier in the heat of battle.

In his first action, as a Private in the 9th Suffolks at Loos in September 1915, he displayed rare resource and even rarer courage. Separated from his battalion, and with every man in his platoon either killed or wounded, he refused to abandon his seriously injured officer, Lieutenant Thomas Stevens. Tragically, his efforts were in vain. Stevens was hit, fatally, by a sniper’s bullet as Sid was carrying him to safety. Though not marked by any military award, his selfless gallantry was recognized by Stevens’ family who presented him with a silver cigarette case. It was a sign of even greater things to come. But first there was another in a run of narrow escapes.

During an attack on the Somme the following year, he was hit by four bullets, one of which pierced his breast pocket only to be deflected by a pack of postcards and some books. Wounded and exhausted, he lay in a shell-hole until dark when he crawled three miles to a dressing station before being evacuated to England. Transferred to the 11th Suffolks, he returned to France and was promoted to Corporal. Nine days later, he went ‘over the top’ again in an attack on German trenches near Hargicourt that would enter military annals.

In charge of a party of grenadethrowers, he spearheaded a charge into a strongpoint known as Malakhoff Farm. The close-quarter fight that followed saw bombs, bayonets and even bare hands employed as the Suffolks battled on, only to be halted by a machine gun - until Sid intervened. Leading his section, he killed two machine gunners and captured four more before bombing his way along the shell-battered trench. Later, he was standing with two officers and three men when a grenade landed among them. Instead of running for cover, Sid picked it up and threw it over the parapet where it exploded immediately. Galvanised by an act of almost suicidal bravery, Sid forged on to capture the position before taking up an advanced post which he maintained for 66 hours in the face of “intense hostile shell and rifle grenade fire”. 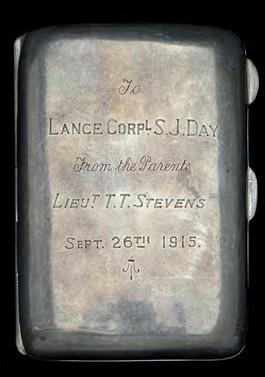 The cigarette case presented to Day.

Finally relieved on 29 August, he was the talk of the battalion. Writing home on 4 September 1916, he could scarcely contain his excitement. “In about six weeks’ time,” he started, “you will, I hope, be informed of great news, which will make you the proudest parents in Norwich. I am recommended for the coveted honour, the VC…” Outlining the action, from which he had emerged unscathed “thanks to God’s mercy and care”, he added:“When we got back to our billets my platoon officer… called me aside, and told me that he was very pleased with what I had done… and was recommending me for a reward.At first, he said, I was in for a MM, but the Captain himself decided on a DCM, but finally the Colonel and Captain thought me worthy of the Victoria Cross. Well, when my officer told me that, you might have knocked me down with a feather…” 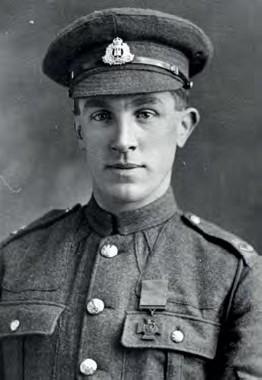 Sid’s good fortune continued to hold. Five months after being fêted in his home city, and four months after receiving his VC, he survived, albeit wounded and a POW, the onslaught of April 1918 that cost his battalion 500 men. Hospitalised and malnourished, he returned home after the war, weakened but without bitterness, to face life in a land not as ‘fit for heroes’ as the slogan promised.

Moving to Portsmouth, he opened the Sidney Day VC Tearoom. But the luck that brought him safely through the First World War deserted him in the Second World War. In 1941, an air raid destroyed his business and, though he found work as a messenger in the naval dockyards, his health began to fail. It proved one battle too many, and on 17 July 1959, the ‘quiet’ hero who had overcome adversity in war and peace, died aged 68. He left a son, widow and a lasting legacy of valour. The sale lot included the VC medal group, cigarette case and a leather compass case and were sold to a telephone bidder for £198,400 on 28 February by order of his family. A spokesperson for the auction house would not divulge details of the buyer.