Reservists to Become ‘Saviours of the Lost Art’ 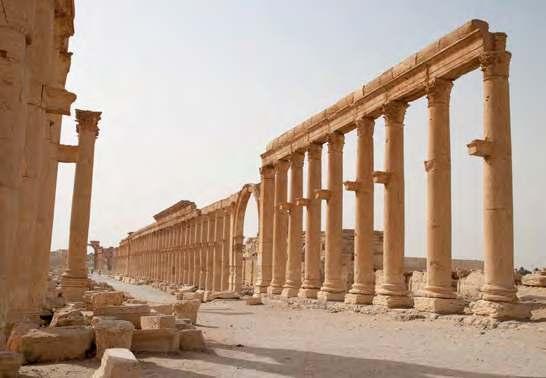 Palmyra prior to its destruction. (DR COLLEEN MORGAN)

THE BRITISH Army is looking for reservists with a penchant for history and archaeology – and ideally an appreciation of the Indiana Jones franchise – to form a unique unit.

The Cultural Property Protection Unit, part of the secretive 77th Brigade, will be tasked with the protection or recovery of ancient or otherwise historically and culturally significant artefacts. The 77th, named after a famous Indian brigade that formed part of the Chindit force in the Second World War, already has a specialised role – helping to stabilise active military or disasterrelief situations.

The new 15-strong unit will recruit from each of the three services, and seeks candidates who normally work as curators, archaeologists, investigators or specialists in the arts and culture. The CPPU’s mission will share some similarities to the fictional experiences of the lovable rogue Indiana Jones Jr (or the equivalent for younger readers, Nathan Drake), as the unit deploys to return works of art or treasures taken by insurgents or an invader, investigates cases of looting, intercepts smugglers, and protects historical sites.

As well as being important to the history and culture of an artefact’s country – and therefore for the hearts and minds of locals – the protection or recovery of such items is of additional military value. Looted objects are often used to fund militant or terrorist organisations and enable them to further destabilise their area of operations or hit out at their targets. Destroyed artefacts or significant historical sites can potentially become powerful propaganda tools to help control locals or to send a message to the world.

The work could be dangerous. The CPPU was formed partly in response to the actions of the so-called Islamic State and its systematic destruction of historic sites, such as the ancient city of Palmyra or Iraq’s Nimrud Palace. Deployments could put the unit directly in the firing line. The unit’s commander, Lieutenant-Colonel Tim Purbrick – Gulf War veteran-turned-reservist and arts dealer – explained: “I’m looking for experts in art, archaeology and art crime investigation, leaders in their field who are able to deploy on operations…

“Our staff could find themselves out on an exercise doing operational planning or sitting at a border, checking vehicles for stolen artefacts… There’s a strong possibility we’ll be working with allies, such as the French, out in somewhere like Mali where they are trying to prevent antiquities being smuggled out.

“Looting and selling antiquities has been proven as a fundraising method for terrorist groups… Part of our job is about preventing ‘threat finance’ – you have an adversary extracting cultural property from the region you are operating in and then, in effect, sending it back at you in the form of bombs and bullets.