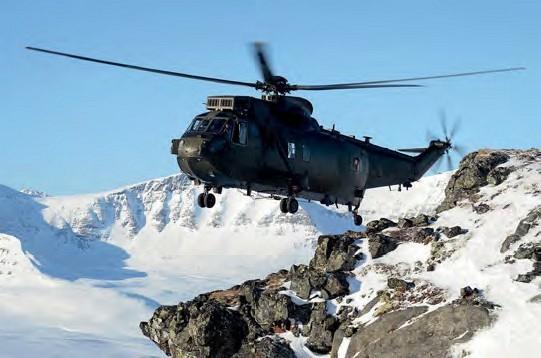 ONE OF the Commando Helicopter Force’s recently retired Sea King Mk.4 helicopters – nicknamed the ‘Junglie’ – has been gifted to the Norwegian people. The Sea King has been given to Norway to mark 50 years of Anglo-Norwegian training and cooperation and has been permanently sited at Bardufoss Air Station – some 200 miles inside the Arctic Circle.

The Norwegian base has hosted the annual Exercise Clockwork since it began in 1969. The exercise, in part, honed the skills of Britain’s elite commandos and also supports Britain’s commitment to defending NATO’s northern frontier.

An estimated 16,000 Royal Marine and Royal Navy personnel have undergone cold weather training there during that halfcentury.

This includes the difficult training undertaken in the field by the Royal Marines, survival skills for pilots, and ground crew developing cold weather maintenance skills in temperatures as low as -30°C (-22°F).

For nearly 40 of those years, the Sea King was the helicopter of choice to support training operations and British aircrew have amassed some 40,000 flight hours in Norway. The donated airframe, ZE427, was delivered in 1985 and saw action in both Gulf Wars and the conflicts in the Balkans. In 1994, while flying to Sarajevo, she was hit nine times by enemy fire causing severe damage.

Once repaired, ZE427 continued to serve until 2016 when the type was retired. The ‘Junglie’ bowed out to the Merlin Mk.3, but to mark the anniversary this year the Commando Merlins and Wildcats of the CHF were joined for the first time by the Army Air Corp’s Apache attack helicopters.

Meanwhile, ZE427 was underslung beneath a Chinook and taken from Gosport to nearby Marchwood Port. There she was loaded onto a ship and sailed to Sørreisa and then taken by road to Bardufoss.

Prince Harry, the Duke of Sussex, who is Captain General of the Royal Marines, was scheduled to visit the exercise on 14 February as part of the anniversary events. During his visit, the ‘Junglie’ was due to be officially handed over and dedicated to the Norwegians.