Soldiers of the RAVC parade through Melton Mowbray in July.
(CROWN COPYRIGHT) 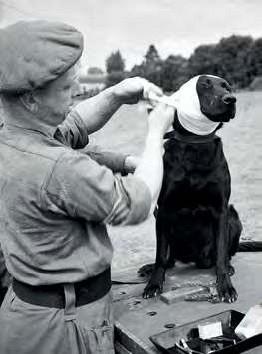 THE ROYAL Army Veterinary Corps has marked its 100th anniversary since the ‘Royal’ prefix was conferred on the unit with a parade in Melton Mowbray. The RAVC has the Freedom of the Leicestershire town, which the corps considers its home, and hundreds lined the streets to support more than 200 soldiers and their charges as the parade progressed.

The parade, held in July, was led by Chief Veterinary Officer Lt Col Neil Smith and included a mounted contingent and working dogs from the 1st Military Working Dog Regiment, based at North Luffenham in neighbouring Rutland. Also in attendance was the Colonel Commandant of the Royal Army Veterinary Corps, Maj Gen Roly Walker, and elements of the Bands of the Royal Signals and the Army Medical Services, members of the RAVC Association, and the Melton Branch of The Royal British Legion.

Speaking at the parade, Lt Col Martyn Thompson, CO Defence Animal Training Regiment, said: “On behalf of the RAVC, I would like to thank the people of Melton Mowbray and the wider community for their ongoing support.

“The corps sees Melton Mowbray as its home. Whilst the RAVC has been based here formally since 1946, the British Army and its animals have been associated with the town since 1905 when the Army Remount Services purchased a stud farm and 400 acres of grazing land. The link between the town and the military remains as strong as ever.’’

While the origins of the RAVC date back to 1796 – with the formation of a military veterinary service in response to the heavy loss of horses while on campaign – the corps was conferred its Royal prefix by King George V, on 27 November 1918, in recognition of its vital work. Of the 2.5 million injured animals treated by the Army Veterinary Corps during the First World War, more than 85% returned to duty and in a letter of congratulations, the Quartermaster General wrote: “The corps, by its initiative and scientific methods, has placed military veterinary organisation on a higher plane.

“The high standard, which it has maintained at home and throughout all theatres has resulted in… an increased mobility of mounted units and a mitigation of animal suffering unapproached in any previous military operation.”

At one point in its history, half of all vets in the UK were serving in the RAVC, and today the corps continues to provide a valued contribution to the British Army, more than 500 horses and 900 dogs serve in the British Army, with a variety of roles from ceremonial drum horses to life-saving sniffer dogs. The RAVC remains the primary formation for the handling, training, and care of the British Army’s animals.