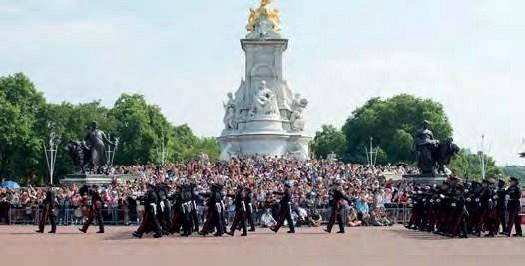 DALTON-BASED troops from 3 Regiment Royal Logistic Corps have swapped their vehicles for a three-month, once-in-alifetime opportunity to provide the guard for Her Majesty The Queen’s Royal Palaces and The Crown Jewels.

The prestigious honour puts the RLC centre stage at the height of the tourist season and has been granted in recognition of the 25th anniversary of the corps, celebrated this year.

The men and woman of 3 Regiment, who normally fulfil a variety of roles such as drivers, suppliers, and communications specialists, trained for six weeks to hone their drill and learn the complex manoeuvres and tasks involved in very public military ceremony. They changed the Queen’s Guard daily with guardsmen from the Foot Guards until the end of July, and through August and into September completed their new duties on alternate days.