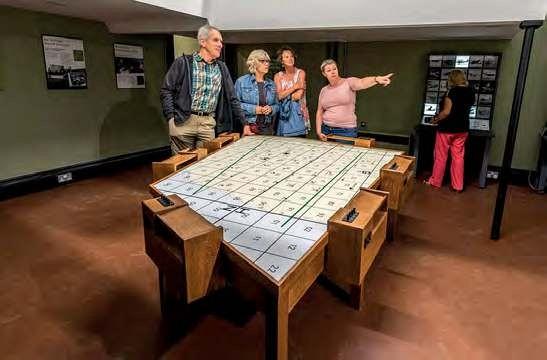 A general view of the ROC control room.
(ALL IMAGES COURTESY KARIS YOUNGMAN)

WORKERS RESTORING a civic building in Bury St Edmunds have revealed a secret – the only surviving Royal Observer Corps Control Room in exactly the place it operated throughout the Second World War and beyond. The ROC used the control room, sited in the Suffolk town’s Guildhall, to monitor nuclear movements until the late 1960s.

Now open to the public, the Control Room is a fascinating look at a little-known wartime activity.

At the back of the Guildhall is the secret entrance used by ROC staff, hidden behind a specially constructed blast wall. Walking through the heavy, blastproof door on the first floor, is a trip back in time. Little seems to have to changed. A purpose-built gallery overlooks an unusually shaped control table reflecting the geographical region of Suffolk and adjoining areas, which were the responsibility of the Control Room staff.

This was one of the busiest control rooms in the country, dealing with hundreds of RAF and USAF aircraft daily. A full-size map of East Anglia hangs at a slight angle from the wall. Somewhat hazardous steps highlight where staff would have climbed to put markers on it, indicating the whereabouts of aircraft.

Detailed markers were used on the table version, using the colour controls on a special clock. The colour sector clock was divided into five-minute segments of red, yellow, blue and has been described as ‘the clock that saved Britain’. Each person around the table would be in constant contact with observers in the field, ready to ring in immediately if aircraft – whether friend or foe – were observed. Within 12 seconds of an aircraft being spotted, it was identified, plotted and information relayed to the RAF.

The Control Room is open on a regular basis, and guided tours are proving extremely popular. For more information, see https://burystedmundsguildhall.org.uk/about/the-rooms 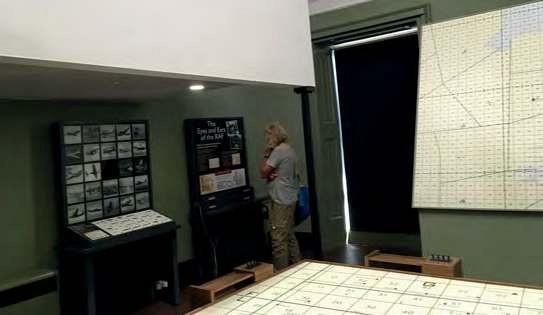 The unusually shaped table at the heart of the ROC control room.