JADTEU experts prepare the Harrier for the move.
(CROWN COPYRIGHT) 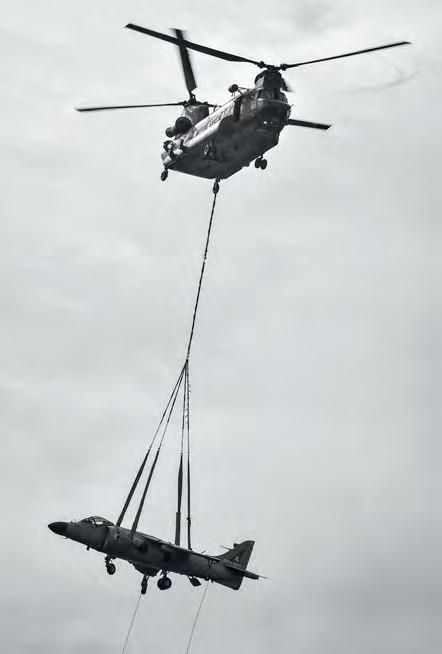 A FORMER Royal Navy Sea Harrier has arrived at its new home in Bristol – via helicopter. Set to open in summer 2017, the new £19 million museum at Filton, north of Bristol, received its Harrier in March after the iconic aircraft was lifted to its new home by the RAF. Although the move, around half a mile across Filton airfield, was not particularly lengthy, there was no adequate road access to the Harrier as a railway intersects the site and the bridges are too narrow for theHarrier to move by road.

A Chinook of 27 Sqn, based at Odiham, was called in to move the aircraft, and once experts from the Joint Air Delivery Test and Evaluation Unit - The Armed Forces’ specialist aircraft movers - prepared the Harrier, the airlift could begin. Although the sight of the six-tonne Jump Jet dangling precariously beneath a helicopter may appear to be unusual, moving large underslung loads is a mainstay of RAF Chinook squadrons, each skilled in precision load carrying. Safely landed, the Harrier will now form a part of exhibitions marking the development of aviation and the vital role Bristol played in that process. In February, the museum also received Concorde 216 ‘G-BOAF’, the last Concorde to be built (aptly, constructed and tested at Filton) and the last to fly.

This particular Harrier, ZD610, built in 1985, was converted to FA.2 standard in 1996 and served in Bosnia. The museum, and the Harrier’s new home, has been constructed around a 100-year-old grade II listed Great War hangar, in which ZD610 will now be displayed. She currently sports 800 NAS markings on her portside, and the markings of 801 NAS on her starboard.

Nestled away for a century, a First World War-era stretcher and wheelchair have been uncovered in Glasgow Central Station, Scotland. This incredible story recounts a grisly chapter in the city’s story, where dead servicemen from the front were temporarily stored in a makeshift mortuary beneath the platforms. The wheelchair was discovered locked up in a cupboard next to a long-derelict staff toilet. Station historian, Paul Lyons, who made the discoveries, said the chair had been adapted from a child’s pram, reflecting the shortage of components required for wheelchairs, which were, expectedly, in extremely high demand. Both items are now expected to go on display at a museum being developed at the station.

☆ Capt. Harry Cator, a Great War VC recipient, has been honoured with a special ceremony marking the 100th anniversary of the heroic acts that saw his prestigious award. The service also saw a memorial stone unveiled in recognition of Capt. Cator’s service to his country. On 9 April 1917, under heavy fire during the Battle of Arras, Cator silenced a machine gun firing on British lines, allowing him to hold his trench until support arrived.

The Royal College of Nursing is creating an online resource to tell the stories of nurses who served in the Great War. The project will “build a bridge” between the stories of Great War nurses and those who served in Iraq and Afghanistan, coinciding with the RCN’s first defence nursing exhibition, which runs until September 2017.