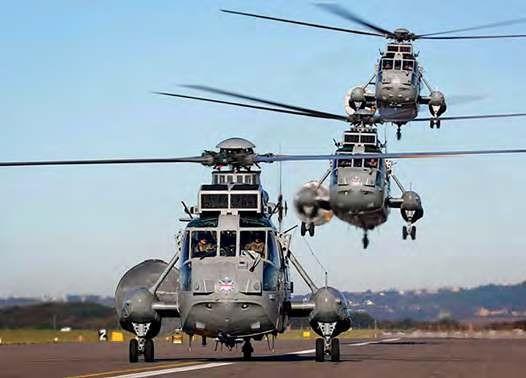 FOLLOWING HALF a century of UK military service, the last of the Royal Navy’s venerable Sea Kings were retired in late September on the conclusion of a farewell flight.

Most of the UK’s Sea King fleet began to be phased out in 2015 with the retirement of the RAF’s SAR platform, and in March 2016 the Navy’s Mk.4 ‘Junglie’ variant was also withdrawn.

However, several of the AEW.7 ASaC variant – which carried the Navy’s airborne early warning radar system and affectionally known as ‘Baggers’ – were retained while the ‘Crowsnest’ system, fitted to the Merlin Mk.2, was developed.

The farewell flight of three 849 RNAS aircraft was preceded by another pairing withdrawn the previous week. The flight took the aircraft from RNAS Culdrose in Cornwall, over Portsmouth Harbour, to Gosport’s HMS Sultan base.

Sea King AEW.2 ‘Baggers’ were rushed into service following the 1982 Falklands Conflict, which highlighted shortcomings in the RN’s defensive posture. The successful marriage of increasingly modern radars to the Sea King’s adaptable, but ageing, airframe has resulted in two modernised variants – the AEW.5 and, in the 2000s, the AEW.7 – and an impressive operational history.

Capable of scanning for airborne and waterborne threats as well as threats on the ground, the AEW.7 completed 2,000 sorties in the Gulf and in Afghanistan directing ground forces, which led to the arrest of 150 terrorist suspects, as well as the seizure of 40 tonnes of drugs and 172 tonnes of explosives. The type is also credited with providing valued assistance in taking Basra and the Al Faw peninsula in 2003.

The Crowsnest is due to become operational onboard the new Queen Elizabeth-class carriers from 2020 and ASaC personnel will transfer across to introduce that type soon.

CLARIFICATION – On page 20 of the October issue of Britain at War, an image of an Avro Tudor was incorrectly captioned as a Handley Page Hastings. Thank you to our eagle-eyed readers for pointing this out. We apologise for any confusion, and we are pleased to set the record straight.