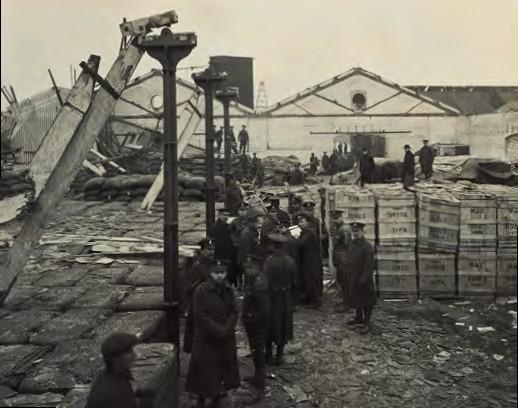 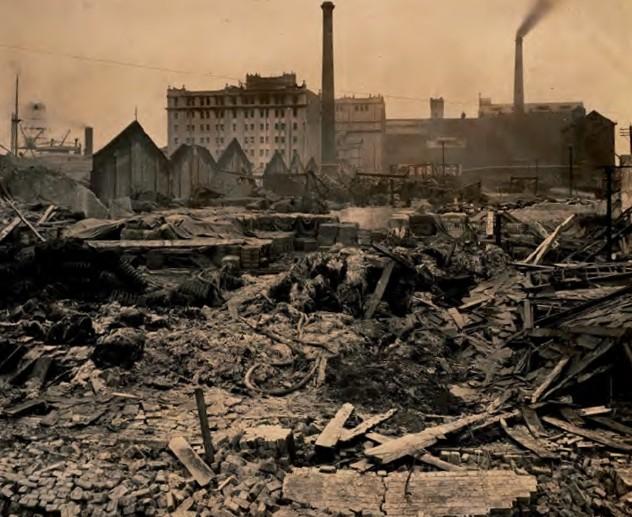 THE FAMILIES of 73 people killed in the Silvertown Explosion have marked the centenary of London’s biggest blast.

On 19 January 1917, about 50 tonnes of Trinitrotoluene (TNT) destined for the Western Front exploded at Brunner Mond, a converted munitions factory at the Royal Docks. The blast was heard 105 miles away, at Sandringham, Norfolk. The factory was purifying TNT, and producing tonnes of the compound daily.

A series of commemorations took place to mark the disaster, and included the publication of forgotten stories from survivors, released by the Royal Docks Management Authority. In addition The Museum of London Docklands have announced they have digitised and released an album of 24 images taken by John H Avery, whose photographic services were commissioned by the Port of London Authority to document the damage done to their property in order to claim compensation.

However, the primary focus of commemorations was on a memorial event, where families of the victims remembered those lost at the site, now part of the Royal Wharf development. Joining them were Sir Hugo Brunner, great grandson of the factory owner and initiator of the ceremony, the Mayor of Newham Sir Robin Wales, and historian Dr Malcolm Graham. Sir Robin spoke of the loss to the community living and working within a major industrial hub.

Damage at the epicentre would not be dissimilar to that seen along the Somme frontier. The plant was destroyed instantly, as were nearby buildings and Silvertown Fire Station. Burning debris, including chunks of railway wagon and machinery, tonnes in weight, was strewn for miles, crushing homes and warehouses packed with combustibles and causing fires visible from Maidstone, Kent, 36 miles away. 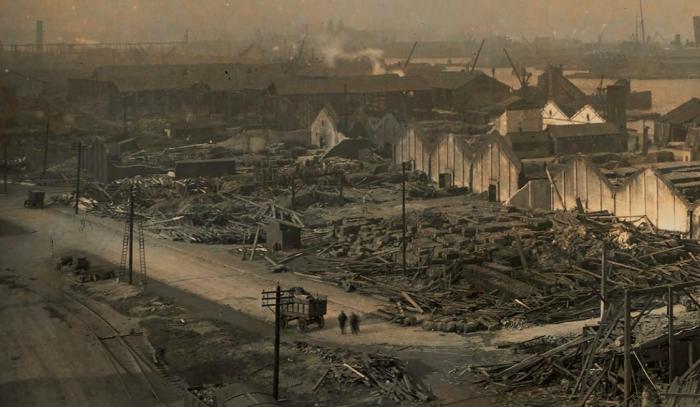 One eyewitness stated: “Suddenly there was a deafening roar, a fountain of flaming debris was projected high into the air and this spread out like a fiery rose, dropping death and destruction over the whole district.”

Sheila Simpson represented her grandmother’s sister, Elizabeth Preston, who was killed at her home over the road from the factory. She left her house with her mother-inlaw and two children. Sheila said: “I was amazed to find to the house still standing but that was the reason why they had died – because they went out into the garden.”

First responders and firefighters were among those caught in the disaster, as prior to the time of the explosion, 6.52pm, a fire had broken out and efforts to extinguish the blaze were underway. Former Woolwich policeman Alan Godfrey spoke of the heroism of local officers, in particular praising PC Edward Greenoff, stating his sacrifice was ‘incredible’: “He was on duty outside the factory when the fire broke out. He remained at his post to warn others of the dangers as the explosion was imminent. He was struck on the head by a large missile and died in hospital a few days later.”

Thankfully, the time of day meant the factory was largely unoccupied as were the upper floors of nearby homes, reducing casualties. Nevertheless, damage was extensive, in nearby Greenwich, a gasometer was struck and 7,100,000cb ft of gas erupted in a fireball. The Port of London Authority estimated 17 acres of warehouses were destroyed while, eight miles distant, the windows of the Savoy Hotel on the Strand were smashed and a taxi was damaged in Pall Mall.

Around 70,000 homes in the area were damaged, with 900 levelled, leaving thousands homeless. Close to 500 were injured. The cause of the blast was never established, though sabotage was ruled out. The effects of this, and other similar disasters, led to the War Office taking control of m unitions production and storage and the legal reclassification of TNT, typically an extremely stable compound, as an explosive under the 1875 Act. 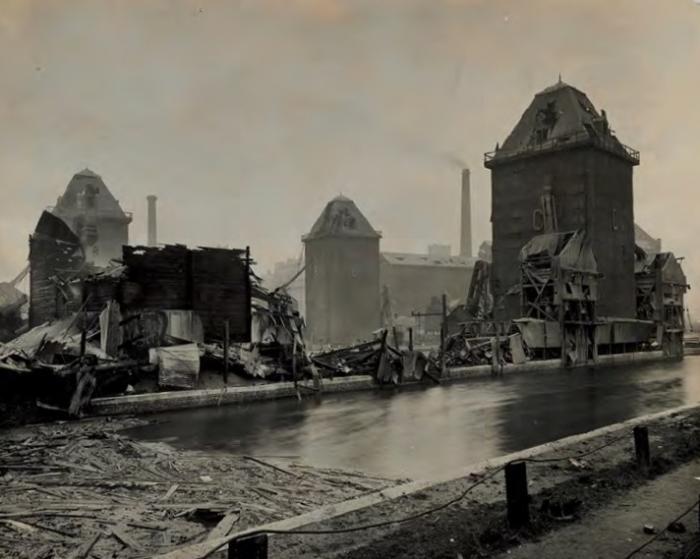 The forgotten stories can be read at: http://www.londonsroyaldocks.com/forgotten-stories/ 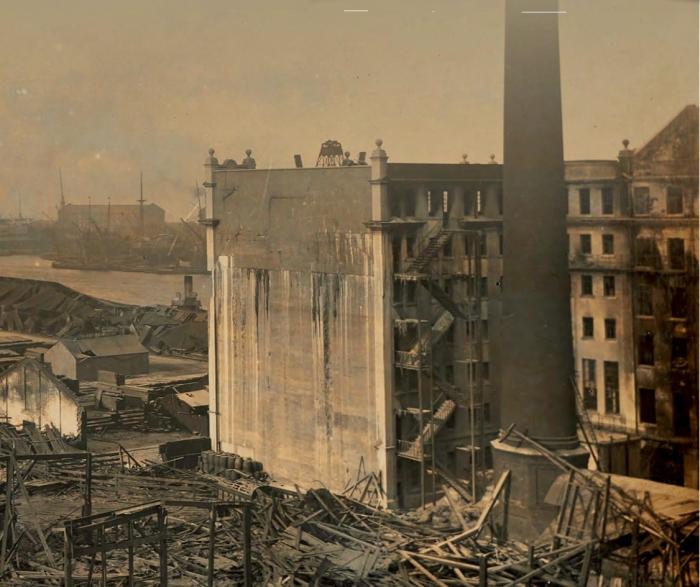 Britain at War thanks The Museum of London Docklands for their support with this article. The museum is located at West India Quay in east London. Opened in 2003, this grade one listed converted Georgian sugar warehouse specifically tells the story of the port, river and city – focusing on trade, migration and commerce in London. The museum is open daily 10am–6pm and is FREE to all, and you can explore the Museum of London Docklands with collections online – home to 90,000 objects with more being added. www.museumoflondon.org.uk.