Sir Ben Kingsley’s Thank You to the Few 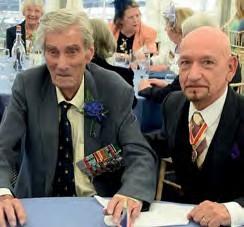 AWARD-WINNING ACTOR Sir Ben Kingsley CBE said a personal ‘thank you, sir’ to one of the last of the Few at a parade and service to mark the 79th anniversary of the Battle of Britain on Sunday July 7. The Oscarwinner was attending the annual Memorial Day at the National Memorial to the Few on Kent’s famous white cliffs when he met 100-year-old former Hurricane pilot and Battle of Britain ace, Wg Cdr Paul Farnes DFM.

After chatting to the veteran, Sir Ben commented: “It was an immense privilege to express, however modestly, my gratitude – our gratitude – to Paul and to his brothers-in-arms for what they prevented. Our world would have been catastrophically different were it not for the Few who defended our skies in 1940.”

The annual event, organised by the Battle of Britain Memorial Trust, included a flypast and display by two Spitfires from the RAF Battle of Britain Memorial Flight and music from the Central Band of the RAF. The Memorial Trust cares for the National Memorial to the Few, which stands on the clifftop at Capelle-Ferne, just outside Folkestone in Kent. A striking visitor centre in the shape of a Spitfire wing was opened by Her Majesty The Queen, accompanied by His Royal Highness The Duke of Edinburgh, in 2015.