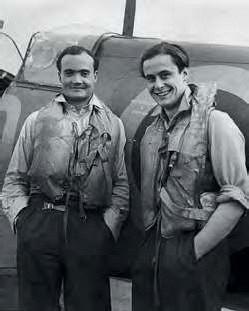 SQUADRON LEADER Geoffrey Wellum DFC died on 18 July, aged 96, writes Andy Saunders. He was the very epitome of the archetypal Battle of Britain pilot; suave, debonair and gallant – and yet the most modest of men. Self-deprecating and selfless (and stubborn) are all sobriquets which have been attributed to this hero of 1940, although he would have been the very last to describe himself as such.

Geoffrey Harris Augustus Wellum was born in Walthamstow, East London, on 14 August 1921 and joined the RAF on a short service commission before beginning his ab initio course on 14 August 1939. After basic and flying training, he was posted to 92 Squadron as a Spitfire pilot on 21 May 1940. He arrived just in time to see his fellow pilots fly off to fight over the Dunkirk beaches. Too inexperienced to be initially risked on operations, the young pilot officer stayed behind and watched with mounting concern as, one by one, members of the squadron failed to return. The awful reality of war was hitting home before he had even taken part.

By the time the Battle of Britain was in full swing, Geoffrey was flying operationally and he claimed a He 111 as destroyed on 11 September 1940, with further enemy aircraft either shared with other pilots or claimed as damaged before the end of the year. The following year, still with 92 Squadron, he damaged a Bf 109 on 26 June, probably destroyed another on 9 July and claimed another as definitely destroyed the following day before being awarded the Distinguished Flying Cross on 5 August 1941.

As a flight commander with 65 Squadron in February 1942, Geoffrey was posted to Malta during late July and led eight Spitfires off HMS Furious on 11 August, landing at Luqa where he joined 1435 Flight. Becoming ill, he was repatriated to England where, after a long leave, he joined Gloster as a Typhoon test pilot.

He retired from the RAF in June 1961, becoming a commodity broker in the City before eventual retirement to Cornwall.