Stolen Dambuster Logbook – Where Is It Now?

AT A hearing in Wood Green Crown Court during January, a military historian, who was well-known as a 617 Squadron historian and author, stole a Dambuster crew member’s flying logbook from the war hero’s widow and also stole irreplaceable artefacts from the National Archives as well as memorabilia from other ‘Dambuster’ squadron members’ families. Alex Bateman, a former history teacher who worked at Harrow School, forged a Christmas card and faked a burglary in a bid to steal the invaluable logbook from 92-year-old Doris Fraser, the widow of the late Flight Sergeant John Fraser.

Valued at £10,000, the book has never been returned to the family after Bateman claimed Flt Sgt Fraser’s logbook and two other members’ logbooks, belonging to Kenneth Earnshaw and Gordon Yeo, were stolen from his home in a break-in just hours before the media revealed he was refusing to return her property in 2003. In 2003 it has emerged that he was handed a Police caution by Scotland Yard after it was discovered he had been stealing documents from the National Archives at Kew. For more than ten years, while purporting to be researching wartime air operations, he had been taking hundreds of items from The National Archives and selling them to buyers in the United States. 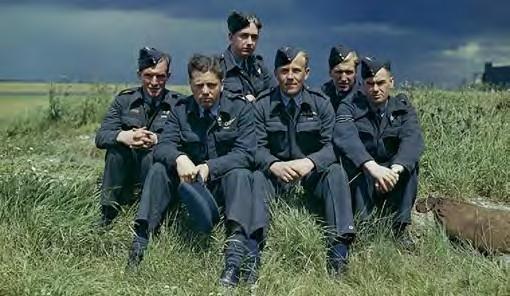 Although not Fraser’s crew, this is the crew of Lancaster AJ – T, photographed at around the time of the Dam’s raid. Memorabilia associated either with the raid and its participants has become highly sought after and today commands extremely high prices.

Some of these documents related to missions conducted by the elite Lancaster bomber unit, including papers relating to the 1943 dams raid. He also took treasured items from other members of the squadron which have also never been returned, it emerged in court. Bateman, of Harrow, persuaded Mrs Fraser to hand over the book in 1996 when he first began looking for research material. Her husband, Flt Sgt Fraser, was one of only two men to survive the crash of one of the Lancasters during Operation Chastise.

After the war, Mrs Fraser started a new life with her husband and children in Canada, but offered to help Bateman when she spotted a local newspaper appeal from him asking for information about the squadron. Mrs Fraser posted him the logbook in January 1996 and the pair maintained a good relationship, regularly exchanging Christmas cards until early 2003, when Mrs Fraser’s daughter, Shere Lowe, asked for the logbook to be returned. Instead of returning the logbook, Bateman sent a letter stapled to a piece of card, which read: “Dear Shere, here as promised is the log book of your father - I know you will find it of interest and it’s a pleasure to return it to its rightful owner.” He had also included a cassette tape about the Dambusters raid, but the logbook itself was missing and there was a slit in the bottom of the envelope. Bateman then claimed that the logbook had been found in a post office sorting room, but suggested he should hand it over in person when the family came to England in May 2003 for a Dambusters reunion “unless instructed otherwise”. Finally, he faked a Christmas card claiming she had said he could keep it. The case was initially dealt with as a civil matter, but in May 2015 the Met police began investigating the historian for theft.

Judge John Dodd told Bateman that he faces jail, and urged him to return the books: “He has done something dreadfully cruel, I think he has it in his power to tell the truth, and if he does choose to tell the truth and restore the original document that will help him enormously.” Bateman, who was remanded in custody until 3 February when he was due to be sentenced, was told that he inevitably faced prison although sentencing was ultimately deferred until 10 February.

If any reader of Britain at War magazine has any information which might lead to the recovery of the stolen logbook, or has any clues as to its present whereabouts, they are asked to get in touch with us at contact@britainatwar.com or call us on 01780 755131 or via PO Box 380, Hastings, East Sussex, TN39 9JA.