If ever a sight and a sound came to symbolise the terror of the German Blitzkrieg then it was the Junkers Ju 87 – the Stuka. Here, Jonathan Falconertakes a look at the history of this infamous warplane. 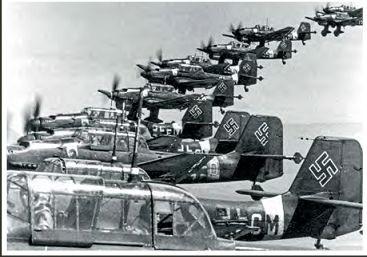 The face of Blitzkrieg: Ju 87 B Stukas from III Gruppe of Stukageschwader 77 (III./StG 77) in close formation over Crimea after an attack on Sevastopol, 1942.
(ANDY SAUNDERS COLLECTION)

Even its name sounds aggressive, derived as it is from the word ‘Sturzkampfflugzeug’, which is the generic German term for dive-bomber. With its distinctive cranked wing and vulture-like looks, the blood curdling shriek of a Stuka in a vertical power-dive was certain to strike fear and panic into the most battle-hardened soldiers as well as defenceless civilians.