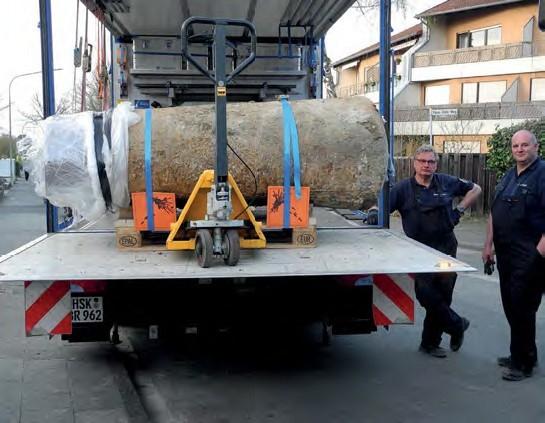 The ‘cookie’ bomb, made safe and removed from the site. (FEUERWEHR PADERBORN)

AT LEAST 26,000 people were evacuated from their homes in the German city of Paderborn following the discovery of a large wartime bomb.

The device, identified as a British 4000lb ‘Cookie’, was found by workers in a garden near the University of Paderborn and is believed to be the among the largest uncovered in the area.

The evacuation saw those inside thousands of homes, four hospitals, five retirement homes, part of a British Army barracks facility, and a hospice be required to vacate a one-mile exclusion zone on 8 April, before bomb disposal experts tackled the bomb, rendering it safe by evening.

Paderborn, near the Ruhr Valley, was bombed heavily in 1944 and in 1945, with 85% of the city’s structures – including several historic buildings – destroyed in raids and across March and April 1945, and as the US 3rd Armored Division battled to seize the city One particularly heavy, raid on 27 March 1945 saw 275 British heavy bombers and 115 American fighter-escorts target the city ahead of the aforementioned ground operation.

The targets were rail facilities, but the old city was badly affected with the 11th century cathedral and the 17th century town hall amongst many historic buildings lost. Nearly 100,000 bombs of varying size were released on that raid alone, the majority being small incendiaries but around 11,000 being high explosive and 200 described as ‘mines’.

The recently uncovered bomb was found to be relatively intact, which is unusual for a ‘cookie’ as their thin case meant they typically shattered if they didn’t detonate. Even more unusually, the bomb was found within a metre of the surface – just under three feet below the ground. Again, large bombs, if they did not shatter, tended to penetrate deep underground and are most commonly found in industrialscale construction works or in rivers, rather than, as here, in someone’s garden.

With the Allies dropping an estimated 1,000,000 tonnes of bombs on Germany during the conflict, unexploded devices are relatively common discoveries there, and while the Paderborn ‘Cookie’ was dealt with safely, eleven German bomb disposal experts have been killed since 2000.