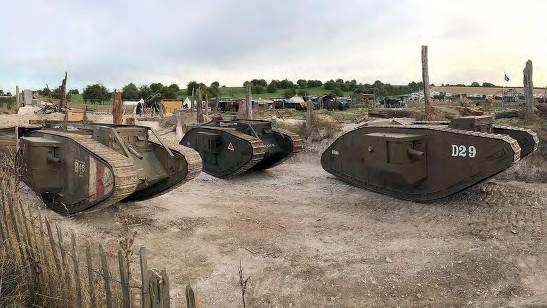 From left to right are the Mk.IV tanka belonging to the Tank Museum, Bovington, Norfolk Tank Museum and the Pond Farm, Poelkapelle, Belgium
STIJN BUTAYE

Held over the August bank holiday weekend, The Great Dorset Steam Fair is the biggest gathering of steam tractors, road rollers and fairground machines. This year, for the first time, three working First World War Mark IV British tank replicas were on display. They participated in the storming of the hill in an arena battle re-enactment each day. The newcomer to these shores was the Mk.IV male tank replica, built in Belgium, with the unit identity D29 painted on the side. Project leader, Stijn Butaye said how privileged he felt, being able to bring his tank to Britain and offer tank rides around the arena. The first British tanks went into combat covered in a multicoloured camouflage scheme designed by the painter Solomon. It was a waste of time as the mud soon covered two thirds of the tank surface and obliterated the camouflage pattern. Tanks were then painted brown to match the local soil colour. The Norfolk Tank Museum’s Mk IV female tank is painted dark brown. If you drive or take the Eurostar train from Calais to Paris, you will notice that ploughed soil is dark brown. The vast majority of churned up earth of no-man’s-land and the British trenches, where little vegetation grew, was dark brown. Later tanks were painted a lighter khaki brown because they were now crossing enemy trenches and into the farmland beyond. The colour of the cereal crops and stubble meant that a dark brown coloured tank stood out and was quickly spotted by artillery observation teams. Pond Farm is on the Passchendaele battlefield in Belgium. It was painted the same colour as the local pasture. In the 1920s and 1930s, all British tanks were painted green. The Army looked after the surviving World War One tanks and painted them green.