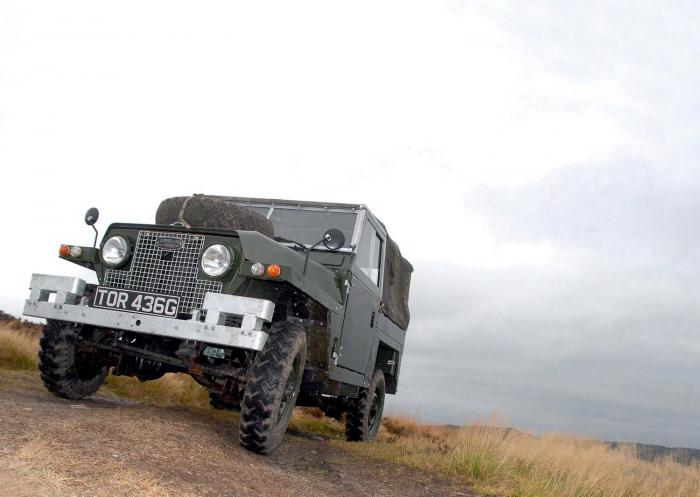 Dave Pinner is no stranger to Land Rovers, having owned and tinkered over the years with more than he can remember; his two latest restorations are Series IIA Lightweights.

One is a genuine RAF General Service (GS) model, in RAF Blue Grey and the other, from February 1969, is also a GS and is no 994 of the first 1,000 Series IIA Lightweights made; approximately 3,000 of which rolled off the production line before the Series III Lightweight superseded the IIA.

The route to completing the Lightweight’s restoration was a circuitous one and the Land Rover you see here combines the best parts from three different vehicles.

As Dave says: “It all started about three years ago. I’d had my eye on a derelict series III Fitted For Radio (FFR) 24V Lightweight that I’d spotted many years earlier in a field near where I live. It was still there after ten years and after some enquiries, I contacted the owner. He said if I wanted it, I could take it away. So I did.”

Rather than find new replacements, over the next couple of years Dave ended up buying two incomplete Series IIA GS 12V Lightweights that he came across on his travels, one of which was a February 1969 GS model and the vehicle he would eventually restore. 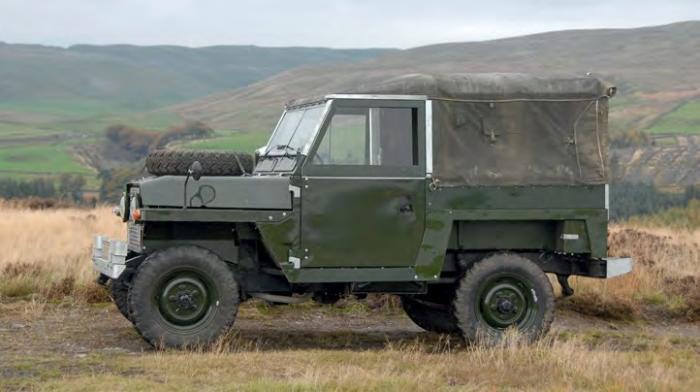 Ironically, in its built-up form, the Lightweight was heavier than the civilian Series IIA it was derived from

As he says: “One had some body panels but no engine and the other had most of the body missing and a Ford V6 engine.” The latter had been civilianised after it left the MoD with a Steve Parker conversion.

Dave’s original intention was to create a replica Series IIA RAF Lightweight but then he came across a genuine one on an auction site. This seemed a better idea than, as Dave puts it, “trying to make the three source vehicles into what in military circles is called a Walt (named after Walter Mitty, dreaming of being someone you’re not).”

The exemplary RAF blue restoration complete, Dave returned to his drive full of Lightweights and work began restoring the early Series IIA as an army vehicle.

Reasonably sound, the chassis from the early Series IIA needed a few repairs including a new rear crossmember. He chose the better of the two lower bulkheads from the Series IIAs though it still required substantial work. Both footwells and A-panels were replaced, together with about a third of the flat panel that forms the main face of the dash. He also had to rebuild the middle side sections of the footwells from scratch as nobody makes replacement panels any more. With some minor repairs a used upper bulkhead sourced from an auction site completed the task.

Dave had planned to replace the Ford V6 engine with the original 2,286cc four cylinder petrol one from the Series III Lightweight he’d found in the field, but the 24V configuration meant that, among other difficulties, it had a different distributor, starter motor and generator.

Luckily, a Series III 12V ex-military engine came up for sale near where Dave lives in the Yorkshire Dales and, complete with all its ancillaries, cost only £100 at a fixed price from an auction site.

In adding an oil cooler, Dave ensured the Lightweight was one step closer to its original specification. He simply had to clean and paint the engine along with fitting a new carburettor and an electronic distributor to get it running well. Fitting the Series III gearbox from the FFR in the field and a new clutch sorted the transmission. Axles, steering and suspension all came from the early Series IIA. Dave fitted new trackrod ends throughout the steering system, new UJ joints and boots on the propshafts and new brake shoes and wheel cylinders for the axles. Brake pipes and flexibles were replaced too. 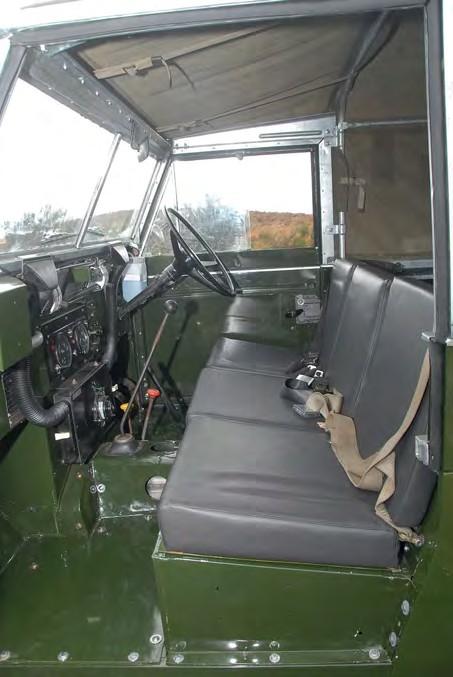 Dave had to rebuild sections of the footwells from scratch 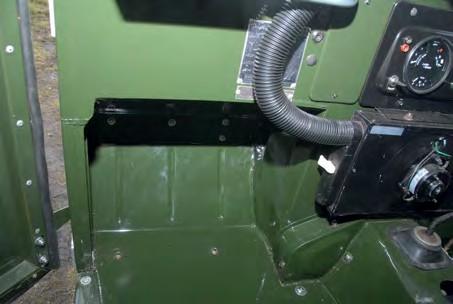 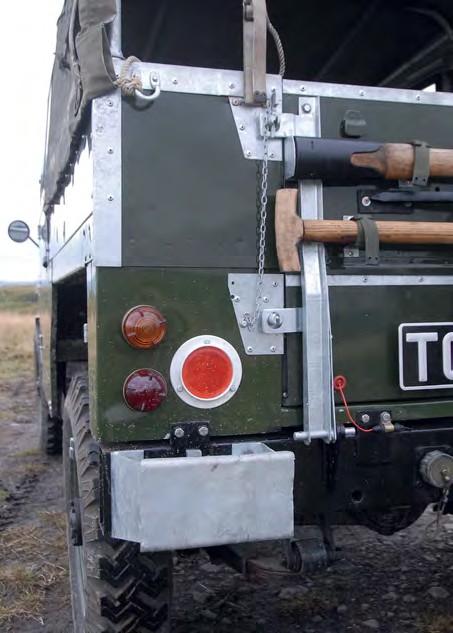 From shot blasting lamp holders to galvanising small metal parts, Dave ensured that all the details were taken care of 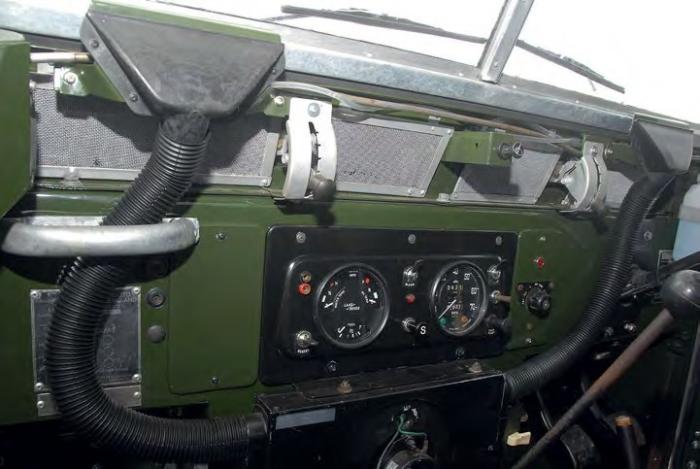 The dash, instrument panels and upper bulkhead were all sourced separately from an online auction site

All surfaces have been painted or galvanised for protection and for a tidy restoration and a correct, secondhand canvas tilt completes the weatherproofing 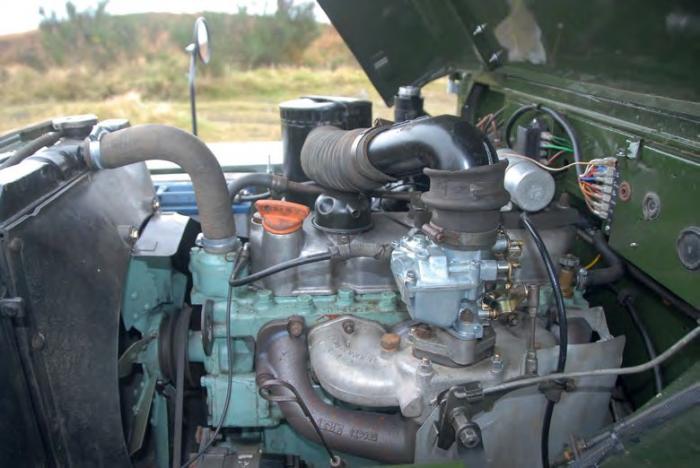 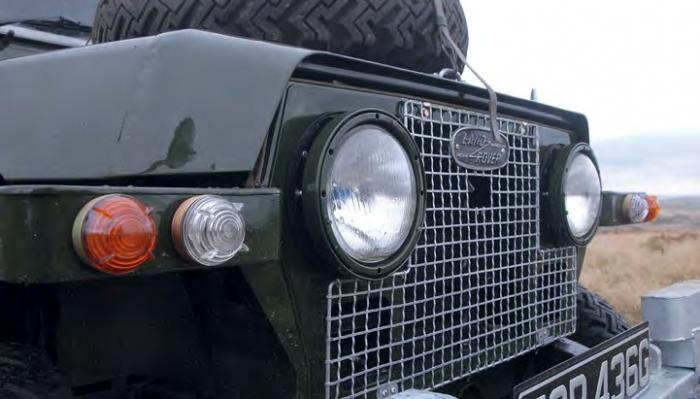 Dave has found that spare headlamp rims are becoming scarce 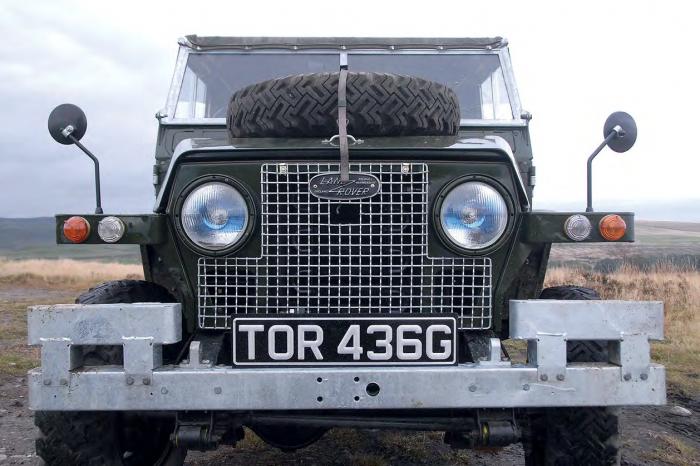 Despite the good bodywork salvaged from the engine-less donor Series IIA Lightweight, Dave needed to buy new doors and doortops. With only the lower tailgate, an upper one was sourced on an auction site. The seatbox came from the Series III Lightweight FFR, as did the floor panels.

Flat seatbox lids were made from aluminium cut to size by Frank Barrett of Keighley who also bent some angle strips to enable the lids to slot into the seatboxes, Dave fitted them together with solid countersunk rivets to provide a secure and firm fit while repairing broken spot welds on the seatbox.

All the galvanised cappings, bumpers, overriders, hood sticks, windscreen and other fittings were redone at Metaltreat in Bradford. Additional small parts which are normally painted were galvanised too, such as the pioneer tool brackets on the tailgate and the plate on the gearbox tunnel through where the 4WD selector emerges. Dave muses that purists might wince but they look better than rusty or peeling parts while in keeping with the character of the vehicle.

The correct military-style headlight rims are scarce and Dave eventually sourced some on an auction site but only two were free from rust holes. All the other lamps have the correct glass lenses and he reports that these too are getting harder to find with all four lugs intact. Replacing all the bulb holders and rubber boots with good used ones, Dave had the retaining rings shot-blasted and refinished in yellow zinc.

None of the three source vehicles had a good fuel tank between them and Dave bought a job lot of three on an auction site for a very reasonable price. However, two of them leaked and short of a second good one, Dave keeps his eye open for leaks while he looks for another. 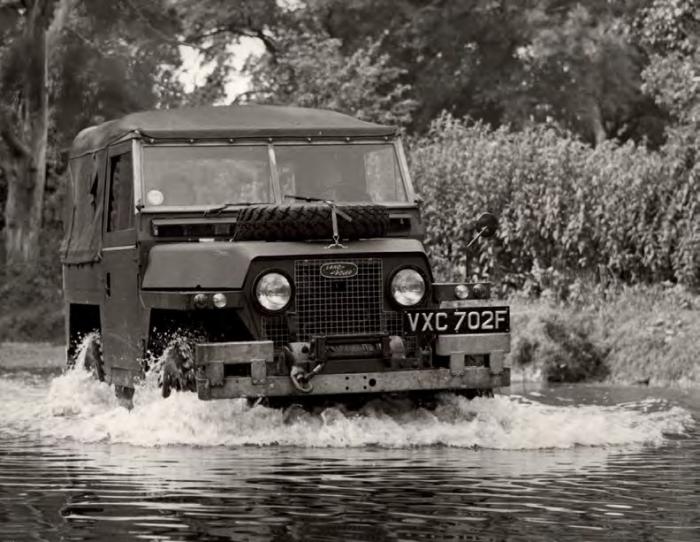 1967: this Lightweight Land Rover with the civilian registration VXC 702F was the first production vehicle built 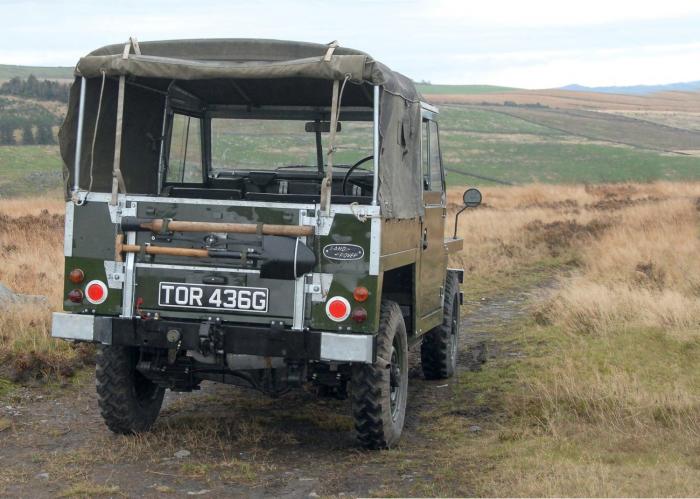 The Lightweight has the fittings for pioneer tools on the two-piece tailgate, the top portion of which is removed for air transportation

Type Manual with 9.5in hydraulic clutch

Brakes Drums all around, mechanical parking brake on the transmission output shaft

Width 60in Wheelbase 88in 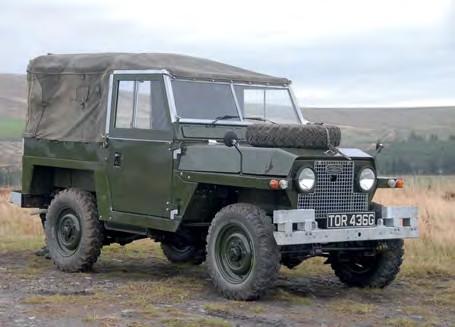 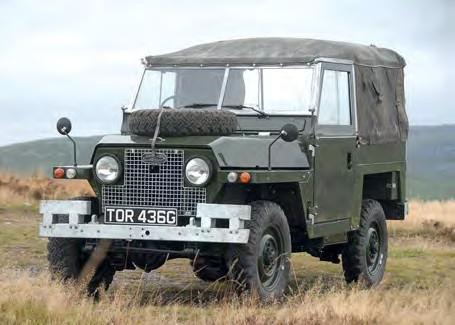 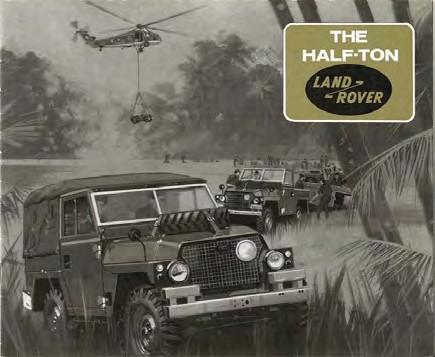 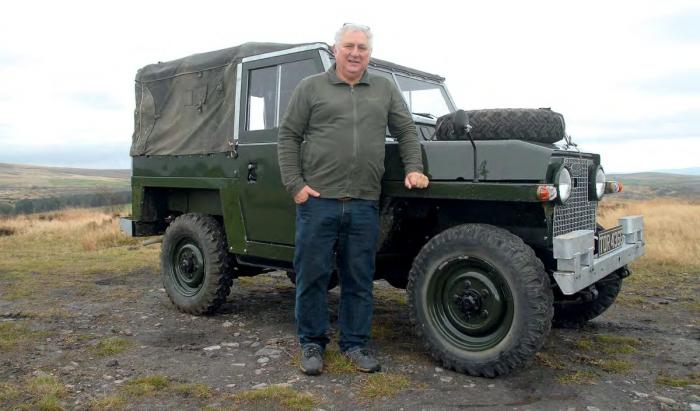 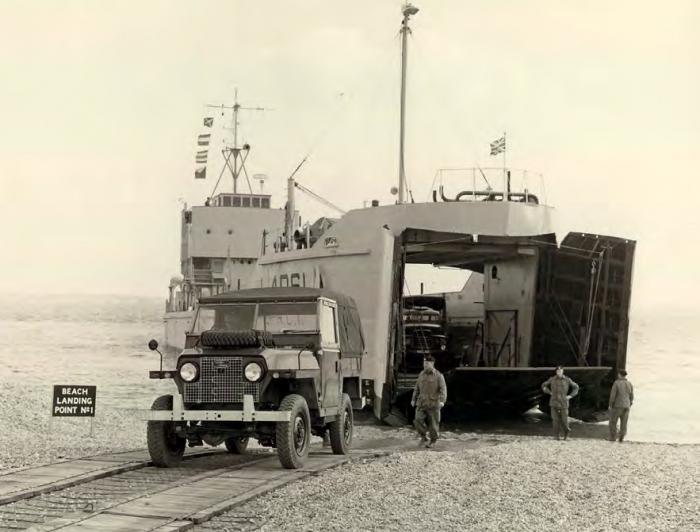 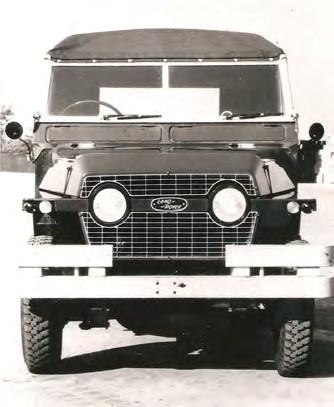 The prototype Lightweight, seen here in 1965, had a different radiator grille to the production models

Being very resourceful, he made new fuel pipes using black PVC tubing which is used for air brake systems. Recovering the fittings from his old pipes he softened the PVC with a hot air gun enough to get them on, making leak-proof pipes of the correct colour.

Meanwhile, a new Autosparks wiring loom needed quite a bit of adaptation to get everything working.

The instrument panel is nearly correct, though has electronic oil and water temperature gauges instead of the capillary type. The ignition warning light is an original one without a separate bulb and is likely irreplaceable. The starter knob with the engraved ‘S’ was specially made by Ashley Hinton, known for his MG parts, and who has much of the original Lucas and Smiths tooling.

New retainers for them came from P A Blanchards and Dunsfold Land Rovers supplied the correct manual windscreen washer pump. Paintwork in Deep Bronze Green was applied by Joe Kelly and team at Ribblesdale Motors, Dave having undertaken the initial panel preparation and now that the garage is tidy of the leftover spares he has a choice. Will it be an RAF blue day or an Army green day?