Eager crowds gathered at The Tank Museum on September 14 for a day dedicated to Tiger 131, the only running Tiger 1 in the world. Tiger 131 runs only twice a year, on Tiger Day in April and September, and always attracts huge crowds when it does. With perfect weather and 4,500 people visiting The Tank Museum to see Tiger 131 alongside its World War Two contemporaries, Tiger Day 12 was another success. It was also an opportunity for Tiger fans to visit the museum’s Tiger Collection exhibition, before it finishes, to allow for the re-development of the hall into an exciting World War Two exhibition coming in early 2020. The Tiger Collection brings all the members of the Tiger family together in a world first. The highlight of Tiger Day was a one hour display which saw Tiger 131 take to the arena alongside its Axis and Allied contemporaries, including a Panzer III, Churchill Mk III, Comet, Stuart, the famous Sherman ‘Fury’ and an extremely rare Type-95 Ha-Go.

Night at the museum 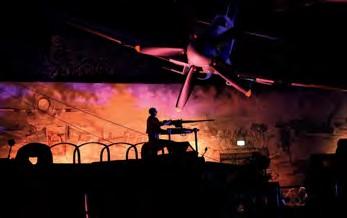 Following the success of its Museum in the Dark experience last year, the Overloon War Museum in The Netherlands will again open its doors to visitors after closing time. Another six evenings have been planned taking place on November 8, 9, 15, 16, 22 and 23. The event will give visitors the opportunity to immerse themselves in three special historical authentic story lines which bring the forgotten Battle of Overloon to life. Through beautiful storytelling, extraordinary images, video projections and lifelike re-enactment, visitors become part of the stories surrounding the Battle of Overloon. A buffet dinner will be served in the museum’s café at an extra cost. To book tickets, visit www.oorlogsmuseum.nl/nl/museum-in-het-donker

Gary Lewi of the Museum of American Armor posted a message on the Classic Military Vehicle Facebook page saying the New York-based museum had recently acquired a Tiger tank replica. Gary said this had sparked a debate over ‘real versus replica’. “With a real Tiger unavailable, can a replica achieve the goal of providing a context for discussing World War Two with a public that is detached from the enormous lessons and legacy of that conflict?” he asked. “The museum says ‘absolutely’.” Several replies were posted in response.

Joshua Stoff: “Nothing wrong with a replica as long as you say it’s a replica.”

There are six surviving originals, and we are giving people the chance who wouldn’t normally see one to have that experience.”

Mick James: “Yes, there is nothing wrong with replica as long they don’t try to pass it off as the real thing.”

- Let us know your thoughts on the matter by emailing cmveditorial@keypublishing.com 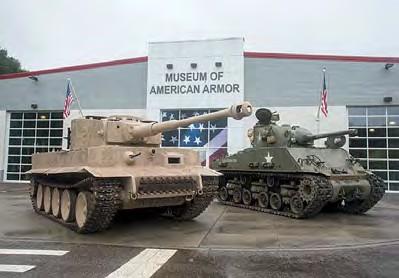 Could readers tell me about the Studebaker 6x6 with dual front wheels on the steering front axle? Imagine the effort required to drive or turn the truck. Once the duals were filled with mud any advantage would be lost. Keep up the good work.

Wagga Wagga, N.S.W, Australia A lot of trucks could be duelled upfront Dave and it was often done when driving in soft ground was anticipated. Apparently, it did make steering difficult but improved traction. If readers have any further comments, please email