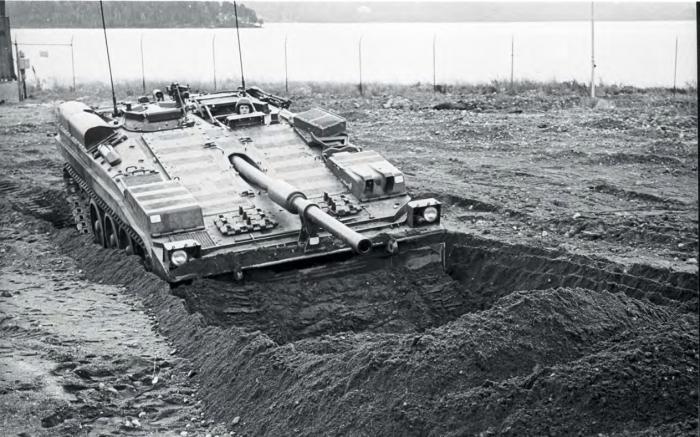 Digging into a trench with its dozer blade, STRV103 minimises the chance of being hit by enemy fire

This turret-less Swedish tank is in a class of its own. Vicky Turner found out more about its unique design 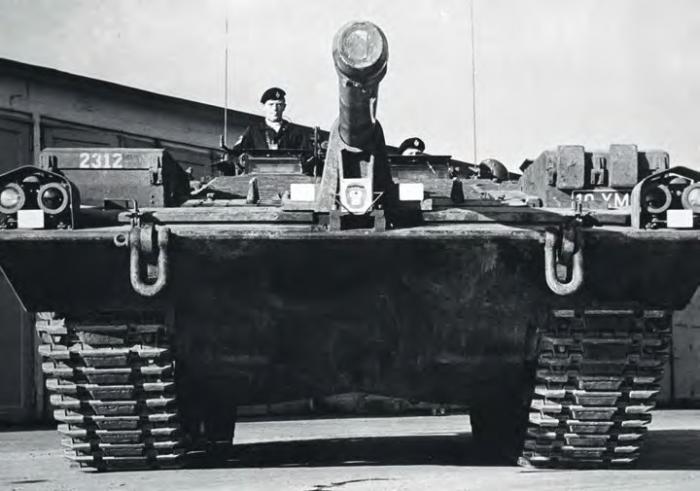 Stridsvagn 103, more commonly referred to simply as STRV103 or S-Tank, was designed and built in Sweden and played a major role in the armed forces from the 1960s to the 1990s. It was first developed conceptually in the 1950s, when various options were weighed up for replacing the Centurions in service at that time. The ideas put forward by a Landsverk, Bofors and Volvo consortium were dismissed for being too expensive (they planned to revive the earlier KRV); the anglo-American heavy tank design options (later manifesting as the Chieftan and the M60) were deemed to have only mediocre manoeuvrability and the more nimble German/French concepts (materialising as the Leopard 1 and AMX 30) were seen to have inadequate protection. It was clear from their studies that the Swedes were looking to balance firepower, speed and protection, but they were unable to find the equilibrium they sought in the designs offered by other nations. This was at the height of the cold war, and the Swedes considered themselves on the front line, despite having remained neutral throughout both world wars.

Sharing a land border with the USSR meant they felt the threat keenly. Speed and low weight, were imperative for strategic mobility reasons as they would need to utilise road and rail networks to deploy rapidly.

In 1956 Sven Berge, an engineer working for the Swedish Arms Administration, tabled a domestic alternative, the S-tank, meaning Swedish tank.

Berge, looking at post war casualty reports, had concluded that there was a direct correlation between the chance of being hit and the height of the vehicle. He overcame this conundrum by removing the turret.

His concept pleased the procurement department as it seemed that with no turret it combined the ability to have well-sloped front armour to protect against the contemporary kinetic armour piercing rounds, a stand-off screen to withstand HEAT rounds and low weight to high power ratios; initially it was conceived to be operated with only a two or even one-man, crew. 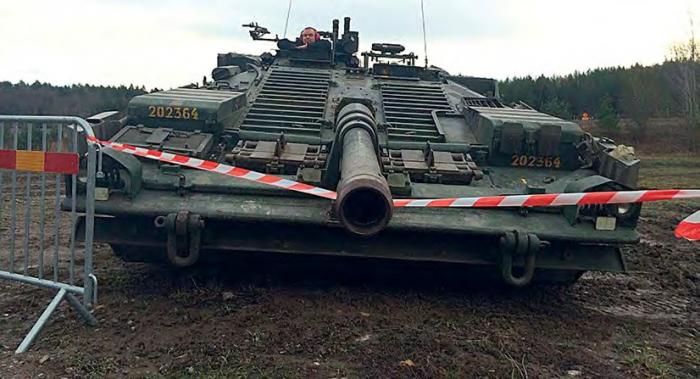 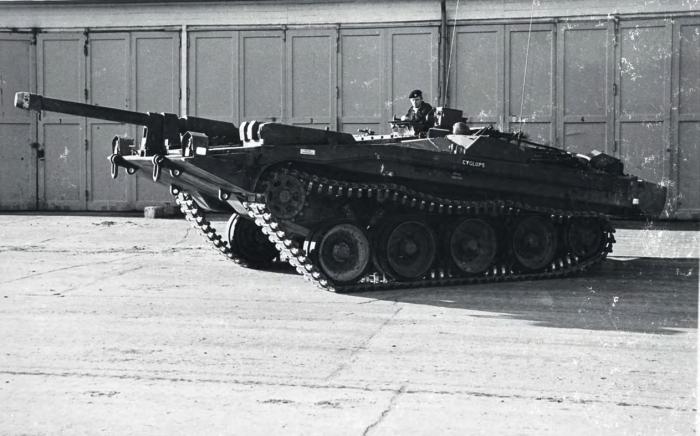 Under test conditions at Bovington’s Armour School in 1968

The minimal crew was down to the idea that the driver would also be the gunner. Instead of a turret, the STRV 103 would have a fixed gun. The tank was not designed with firing on the move in mind, and consequently did not feature any gun stabilising technology. Using revolutionary fully automated gas hydraulic hydro-pneumatic suspension to set the gun, the STRV’s elevation and depression was 22 degrees better than most tanks of its generation. It could pivot on its own axis and so was reasonably speedy at lining up the gun sight before stopping to fire.

The lack of turret, meant that in a combat situation and in hull-down firing position it had very little apparent height and presented minimal visual profile to the enemy. The hull height could be reduced by 13cm by manipulating the suspension. This was its main advantage. Stefan Karlsson, ex-tank commander and now museum director of the Arsenalen tank museum, jokingly described STRV as a ‘stealth tank’.

The finalised design did not give the STRV much actual height advantage. Its most likely combat opponent was the T-64 which was only 6cm taller, but with a turret, had desperately cramped interior and poor gun depression. In the STRV, the removal of the turret had the additional benefit of allowing the internal space for an autoloader on the Bofors 105mm L74 rifled gun, allowing a fire rate of one round every third second. It also enabled the eventual inclusion of a third crew member when field trials indicated that in practice, two men would be overwhelmed with the work level. Dual controls were subsequently included for the rear driver/radio operator. This in turn increased combat efficiency as the tank could now reverse at the same speed as forwards, leaving the forward protection facing the enemy as the tank retreated.

Initially STRV 103A was powered by a 240bhp Rolls Royce K60 engine, combined with a 30bhp Boeing 502 turbine when higher speeds were necessary. It became quickly apparent that the turbine engine was underpowered, so it was later replaced with a 490bhp Caterpillar turbine, which was also retrofitted into the 70 tanks already off the production line. The STRV was also designed to be fully amphibious, and a floatation screen on the upper hull could be erected within 20 minutes. It had a swim speed of 3.7mph.

STRV103 had four iterations; STRV 103A was the first but quickly upgraded to STRV 103B status, which had the Caterpillar turbine, STRV 103C included a dozer blade in every vehicle, improved fire control systems and saw the 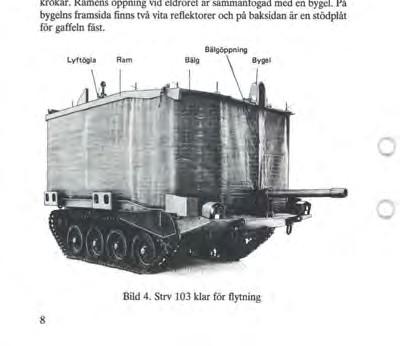 Preparing the tank to be amphibious takes about 25 minutes 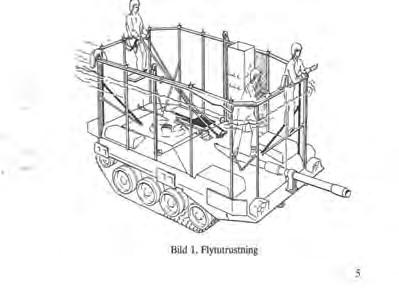 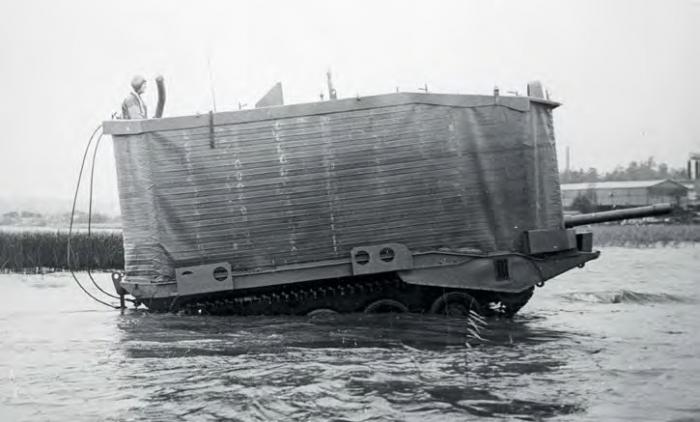 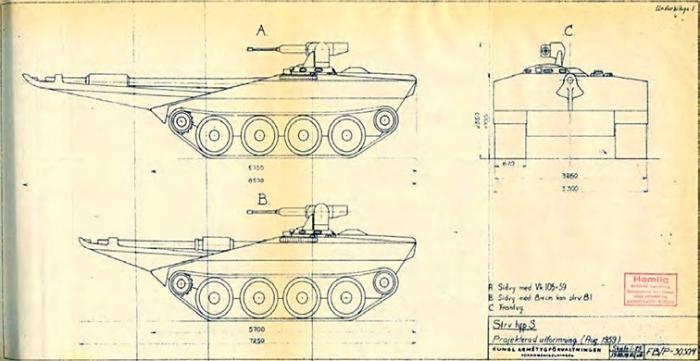 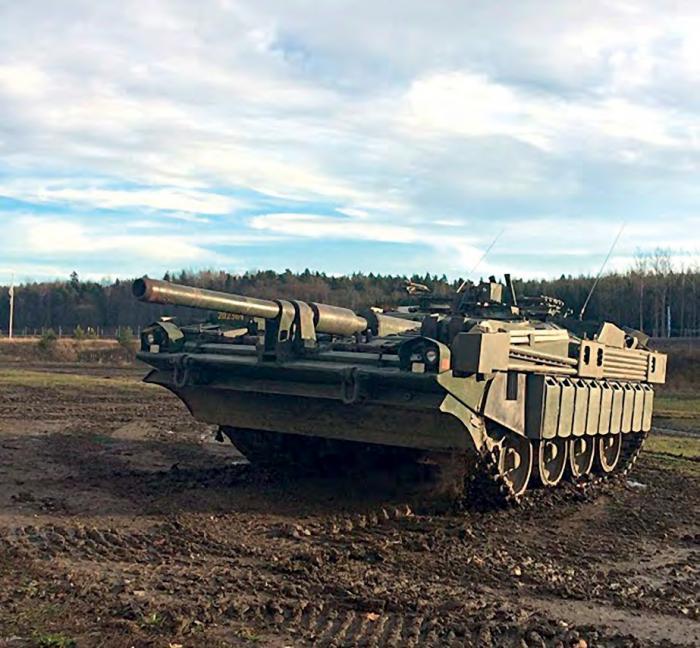 Power 290bhpp (730bhp when combined with the gas turbine)

Rolls Royce engine replaced by the Detroit diesel and STRV 103D had installed a fire control computer, thermal viewers and passive light enhancers for driving. STRV has a few unique features, it remains the only tank since World War Two to have abandoned the turret; it was the first tank to adopt the turbine engine, and its fixed gun is sighted by engaging the tracks and utilising the extraordinary gas hydraulic-pneumatic suspension, raising and lowering the hull to get the necessary trajectory to hit the intended target. Its elevation range is from-11 through +16 degrees. It almost defies categorisation; turret-less armoured vehicles are usually known as assault guns or tank destroyers, but the STRV is considered a main battle tank because of its intended role within battle situations – it was for use by the Swedish army’s armoured brigades, whose role was offensive, and because its capabilities matched those of its contemporaries. In 1968, two STRV 103s were tested at Bovington. It was concluded ‘the turret-less concept of the S-Tank, holds considerable advantage over turreted tanks’. It was designed using defensive positioning doctrine though; it could either utilise the characteristics of the hilly terrain it was intended for, positioning itself below the brow of a hill, or dig itself into earthworks with its dozer blade. It was then to assume the hull-down firing position making it next to impossible for the enemy to spot. Before the enemy had a fix on its position, it was then to retire, in fast, protected reverse, to another strategic position, setting up for another offensive onslaught. 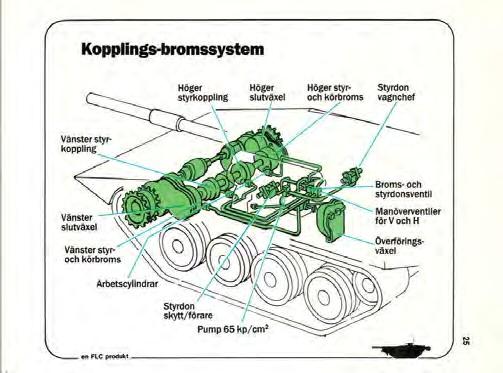 Responsive steering and breaking was integral to the way the gun was sighted. The S-Tank could pivot on its own axis 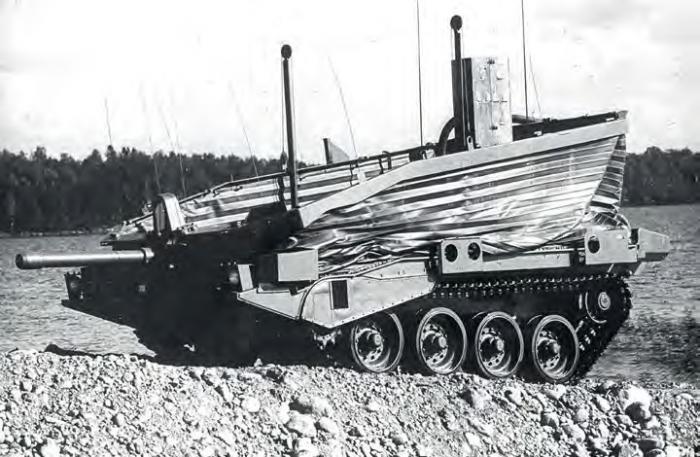 Thanks to Bovington Tank Museum, Swedish Tank Archives and Stefan Karlsson and the Arsenalen Museum