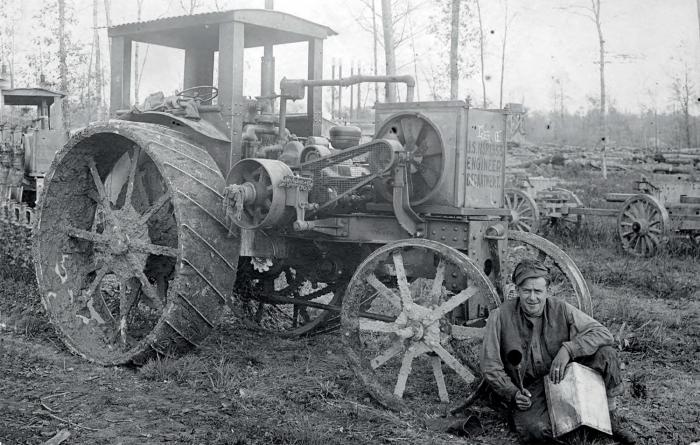 Due to the enormous number of diverse uses that it could be put to and the vast quantities that would be required, lumber (along with guns, ammunition and many other pieces of military equipment), was considered to be a vital munition of war. The majority of cut lumber would be destined for the front line where it would be used in the construction of trenches, tunnels, fire steps and duck boards as well as being used in no-man’s land as pickets to support the barbed wire.

Lumber was also necessary for the many supporting tasks such as the construction of barracks, hospitals, warehouses, railway tracks, telegraph poles and road surfaces. The best quality wood of all (spruce) was used for the manufacture of aircraft, while that of lesser quality and the offcuts were used as a convenient heating fuel. The variety of uses it was put to was enormous and the process set up by the US Army Engineers in France to locate, harvest, fell, transport and cut it to size took a great deal of organisation and effort. At the time of the armistice the US Engineers (being the largest of the technical services) had 174,000 personnel of which 18,500 were employed in the French lumber industry. They were assisted in this difficult task by a variety of specialist equipment and vehicles, many of which were unique to the US Engineers Forestry Regiment. 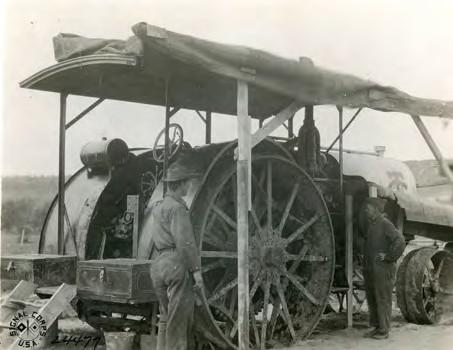 The products of Twin City remained in their factory colour scheme of grey and red, indicating they were not used very close to the front-line 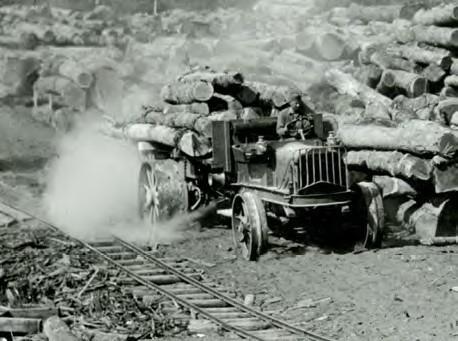 Delivering another heavy load of lumber, the exhaust on this White TKA-ATC is venting downwards and is blowing up a great big cloud of dust 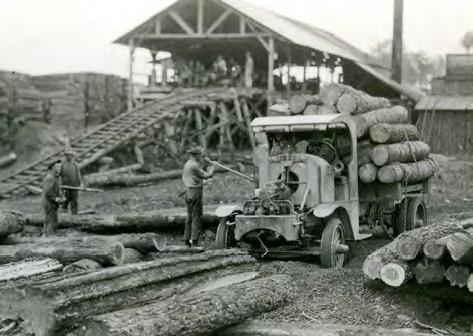 The radiator on this heavily laden Mack is located behind the engine, so the bonnet has probably been removed to assist cooling 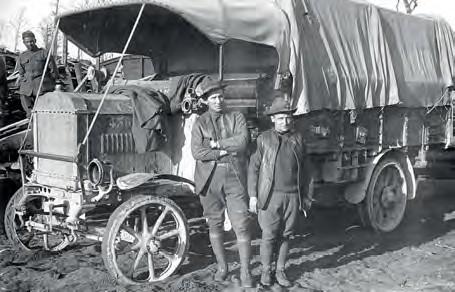 Delivering wood is this US Army Dennis subsidy lorry on loan from the British. Its battered and muddy appearance suggests it is having a hard life 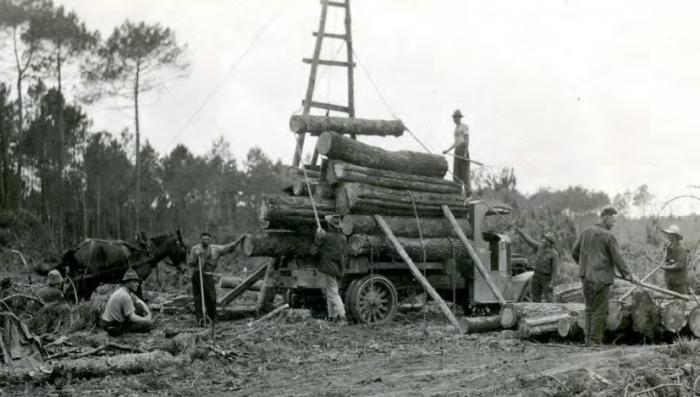 The payload of the Mack was five tons which has probably been exceeded with this load of logs. Note the primitive A-frame used for loading

Shortly after arriving in France the head of the American Expeditionary Force (AEF) General Pershing became acutely aware of the desperate need to source their own timber in France rather than rely on imports from the USA due to the shortage of transport ships and docks. To remedy the lack of deep water ports required for the unloading of the larger transport ships coming from America, US Engineers started the construction of a deep water port at Bassens (near Bordeaux) which required extra-long wooden piling. One shipload of these had arrived from the Pacific coast of the USA, but when they were unloaded they were found to have been cut in half to make them easier to load which unfortunately made them useless.

In June 1917 the 10th Forestry Regiment was formed with the express objective of undertaking forestry work in France in anticipation of the arrival of the rest of the AEF. The army approached the forestry service of the US Department of Agriculture to bring together key personnel and identify the specialist equipment that would be required. When the advance guard of the American foresters arrived in France they found the French Forestry Service would only allow them to cut the trees that they directed them to.

The French were rather environmentally conscious at this time and wanted to ensure that the forests were not over harvested so that they would be sustainable for the future. As another blow to the Americans the French advised them that they would be unable to supply them with any of the machinery for cutting, sawing and transportation of the lumber and this would all have to come from the United States.

As the 10th Forestry Regiment disembarked on October 2 they were disappointed to find that very little of their specialist equipment had arrived with them so they set to work without it, improvising when necessary. To transport the freshly cut tree to the saw mill, harnesses made out of rope and sacks with motive power coming from either horses or teams of engineers were used. 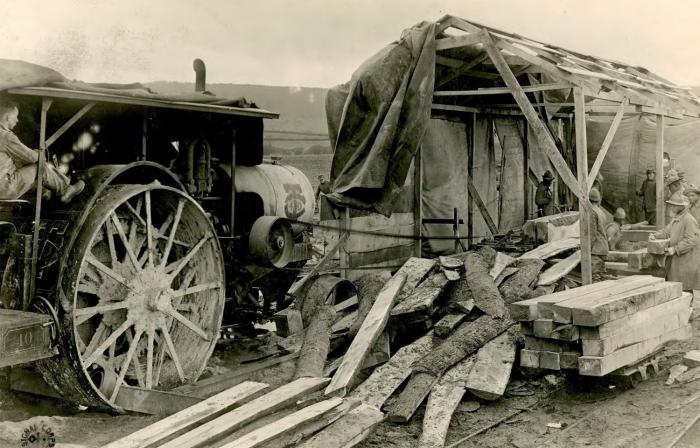 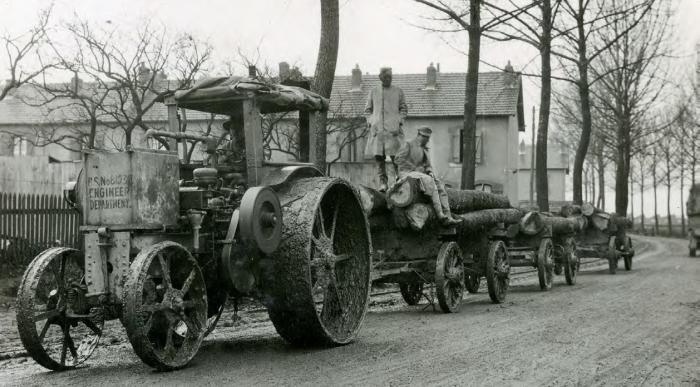 Instead of a radiator the International was fitted with a water tank. Towing three trailers of logs this model 15-30 is near the town of Gironcourt

Thankfully this back-breaking task came to an end with the gradual arrival of their trucks, tractors and narrow gauge railways which were soon put to work to transport the lumber from the forest to the saw mills.

The most impressive machine used was the enormous Twin City Type 40 tractor which was manufactured by the Minneapolis Steel and Machinery Company. These machines weighed just under 11 tons and were powered by a fourcylinder, 24.5-litre kerosene engine giving it a top speed of about 10mph. Speed was not a concern though as it had only one forward and one reverse gear. What was important was its ability to tow very heavy loads and then power machinery from the flywheel.

The method of cooling the engine gave the machine its steam traction engine-like appearance. Sitting in front of the engine was a large water tank with 130 metal tubes running through it. This worked like a steam engine boiler in reverse, pulling cold air through the tubes to cool the water in the tank. The Type 40 entered into production in 1916 and ended in 1925. There are several examples in preservation - at least one of which is within the UK.

Much smaller in stature to the Twin City was the International Model 15-30 tractor. Just 365 of these four-ton tractors were built in 1918 with production ending in 1921. Fitted with a horizontally opposed four-cylinder 11.4-litre kerosene engine it generated 26 drawbar bhp and 37 bhp on the flywheel. The US Engineers used these tractors in small numbers for both road making and for hauling trailers of lumber.

The lightest of the tractors bought by the US Engineers was the Gray Model 18-36. Like the tractors described previously this was of a commercial design specifically for use in orchards. 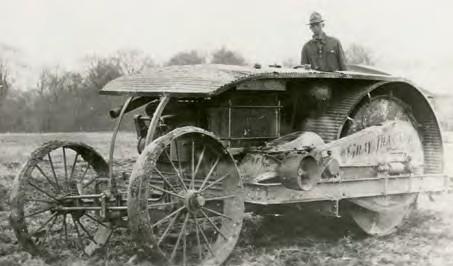 The Gray tractor was said to be very uncomfortable to drive with the driver allegedly needing a day to recover after a day of driving! 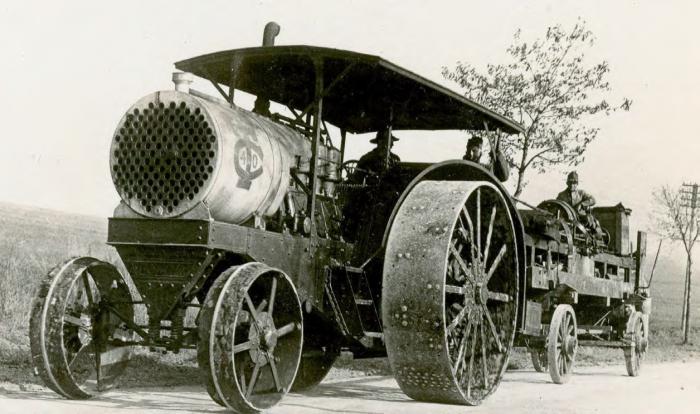 It had been designed and marketed by a fruit grower named W Chandler Knapp whose company was taken over by the Minneapolis-based Gray Tractor Manufacturing Company in 1914. To improve traction the original idea of having two rear wheels was replaced with a drum. Power to the drum came via a chain powered by the four-cylinder Waukesha engine. The whole contraption was covered in corrugated metal to protect it from the elements although no such protection was afforded to the driver. The tractor was described as being difficult to manoeuvre and tiring to drive. At the end of the war Gray exported a large number of these tractors to Europe for the civilian market and several still survive.

The favourite truck of the US Engineers was the Mack Model AC Bulldog. These exceptionally rugged machines were put to a variety of uses and most photographs seem to show them heavily over-loaded. By the end of 1918 the US Engineers would have taken 1365 of the five-ton and 278 of the 3.5-ton versions over to France. Fitted with a flat bed and connected to a bolster the Macks could carry exceptionally long and heavy loads. Another truck that was unique to the forestry regiments was the White Model TKA-ATC. Fitted with a 60bhp six-cylinder engine and running on metal wheels with no tyres, this machine was ideally suited for work in the forests. Just 34 of these machines were used in France. There were never enough of these specialist trucks to equip the forestry regiments so the shortfall was made up with the more readily available four-wheel-drive FWD and Nash Quad

The destination of all freshly cut lumber would be the most important piece of equipment for the forestry engineers, the saw mill. Used for cutting lengths of tree trunk into useful sizes they came in three models. The portable Bolter Mill which had a single rotating saw driven by a petrol engine was used for cutting short pieces of wood (up to about 12 feet in length) into planks. The complete mill weighed about 3,000 pounds and would occupy a space of approximately 28x10 feet. Not so portable were the 10M and 20M mills which were able to cut 10,000 and 20,000 feet of planks in a ten-hour period. These were quite substantial machines, powered by a 200bhp engine which had to be dismantled to be relocated. Two of these engines might be assigned to a single forestry camp where 3,000 men were employed.

On November 11, 1918 the forestry engineers working in the woods were alerted that the war had ended by the constant sounding of the steam whistle on the engines that powered the mills. The engineers who came out of the woods to hear the news were told that there would be no time for celebration as cut lumber would still be required. Strangely, at almost all of the camps, the mills suddenly developed problems or found that a crucial part of the machinery had gone missing and work had to be stopped until replacements were found.

By the end of the war the forestry engineers had in service 282 saw mills, 1,850 logging wagons, 12,500 horses, 128 tractors, 2,300 motor trucks and trailers, 85 railway locomotives, 2,070 railway wagons and they had laid 400 miles of railway track. During this time (and into early 1919) they had cut more than 212 million feet of lumber, just short of ten million railway sleepers and nearly two million wooden poles. Records show that they had also built to order numerous huts, stables, furniture, picture frames and apparently one surf board! 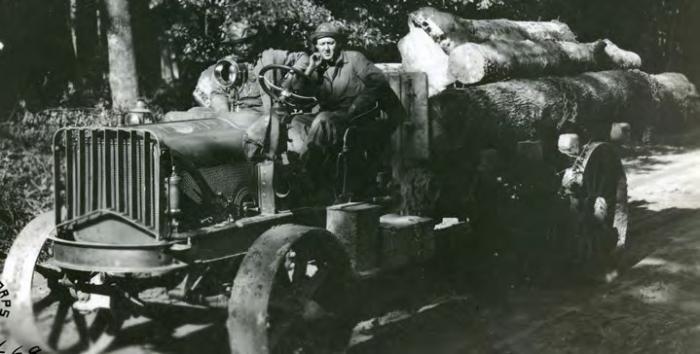 The White TKA-ATC was a monstrous machine designed for lumber haulage. The wheels have no tyres so you wonder how it coped in muddy conditions