BRITISH CONSTRUCTION company Wates Group, which helped to build the massive Mulberry harbours, has worked with historian Guy Waters and veterans to tell the story of these famous floating docks. Memories of Mulberry is a short video that briefly explores the history and development of the vital harbours and Wates has used images and film from its archive to highlight this innovative wartime marvel.

Among the images and stills are a number of rare shots unearthed from the Wates archive to illustrate how the Mulberrys were developed and deployed. The massive military infrastructure project was completed with utmost secrecy and went from memo to beaches in under two years.

The concept of the floating ports was an old one – according to the Institution of Civil Engineers (ICE), Winston Churchill envisaged portable harbours in 1917. A later memo from Churchill dated May 1942 highlighted the need for a movable port which rose and fell with the tide and could be securely anchored in place. His note ended with the immortal words: “Don’t argue the matter. The difficulties will argue for themselves. W.S.C.”

The calamitous Dieppe Raid in August 1942 led to military chiefs, notably Vice-Admiral John Hughes- Hallett – who led the raid – to call for a solution to the problem of capturing a serviceable port intact. Lord Mountbatten had his role to play in the development of the complicated artificial harbours, as did civil engineer Hugh Lorys Hughes, Major Allan Beckett of the Royal Engineers and numerous others. The ICE claims 45,000 people from 300 companies were involved in the construction of the Mulberry Harbours, while Wates suggests its engineers were part of a 200,000-strong force involved in the development of the facilities.

The huge effort resulted in two workable harbours a mile long, each supported by six miles of roadway floated on platoons and protected by giant caissons – these alone required 31,000 tonnes of steel. Massive breakwaters were installed on each of the five beaches, formed from carefully positioned scuttled ships – including the battleship HMS Centurion, the cruiser HMS Duncan and the Dutch cruiser HNLMS Sumatra. 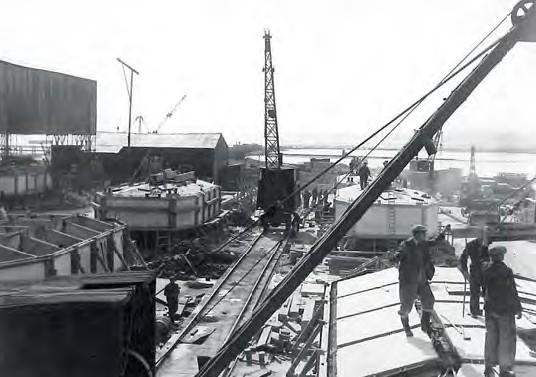 Component parts of a Mulberry Harbour under construction in Southampton, 1943.

The harbours were pre-fabricated in various locations across the UK, with the component parts and ships destined for the breakwater towed across the English Channel and assembled in situ. They were operational by D-Day+12. While the Mulberry positioned off Omaha was destroyed in a storm, the Mulberry near Arromanches operated for ten months and made a significant logistical contribution to the campaign in North West Europe.

The video produced by Wates Group can be viewed on Britain at War’s Facebook page. 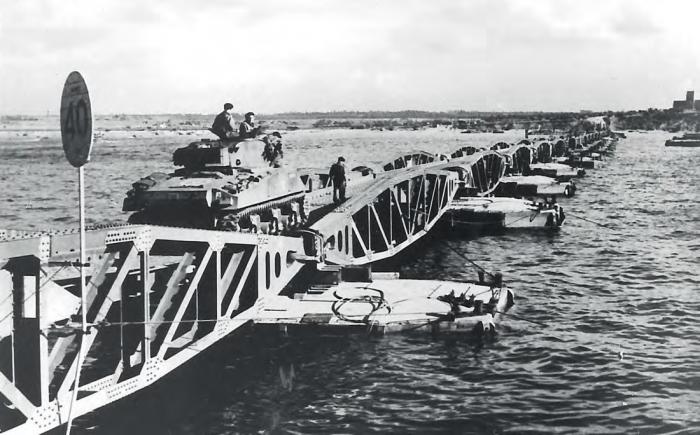 A British-marked Sherman moves down a floating roadway – known as ‘Whales’ – which connected the ports with the shore.
(IMAGES USED WITH THE KIND PERMISSION OF WATES GROUP)