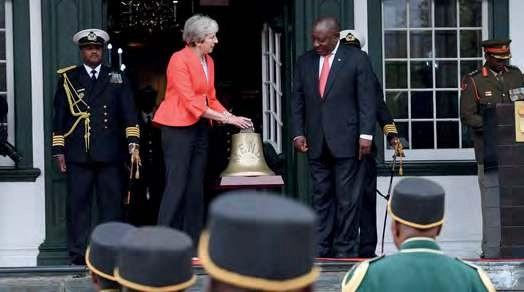 Theresa May presents the bell to Cyril Ramaphosa.
(PA ARCHIVE)

PRIME MINISTER Theresa May has presented South Africa with the recovered bell of the SS Mendi, recognising the country’s sacrifices for the Commonwealth during the Great War, writes Alex Bowers.

The handover of the bell to South African President Cyril Ramaphosa signified Britain’s commitment to remembering nearly 650 South African servicemen who perished following the sinking of the SS Mendi on 21 February 1917. At a ceremony held in Cape Town, President Ramaphosa said: “Through this act, we feel as if we have gone some way to return home the souls of our fallen soldiers”. Mrs May, referred to the 646 South African service personnel aboard the vessel, originally bound for the Western Front, and said: “We will be forever grateful for their sacrifice in a common cause”.

The disaster occurred in dense fog, south of the Isle of Wight when the abnormal weather conditions led to the SS Darro, a cargo ship with the Royal Mail Steam Packet Company, colliding with the Mendi. While some on board were killed during the initial breach of the forward hold, most drowned in the freezing waters of the English Channel. Just 267 survived of more than 800 on board; the vast majority of those who died were black South Africans belonging to the South African Native Labour Corps.

In 1974 an English diver discovered the wreck of the SS Mendi, however, its bell mysteriously disappeared during the 1980s. The wreck site has since become a protected war grave.

Curiously, in 2017 – coinciding with the centenary of the sinking – the bell was given anonymously to BBC reporter Steve Humphrey. It was wrapped in a plastic bag, with a note reading: “If I handed it in myself it might not go to the rightful place”.