BRITAIN AT WAR recently met with Wargaming (World of Tanks and World of Warships) and Chatham Historic Dockyard, where the latter presented a glimpse of the future for historical preservation and accessibility.

‘Virtually Inside HMS Cavalier’ consists of a series of 360° videos shot on board the destroyer. Within it, there are augmented data panels and diagrams - the type of project easily facilitates the embedding of supplementary video and archive material. Dan Snow, well-known broadcaster and historian, was involved in the project, working with Wargaming’s military specialist, Richard Cutland.

The app, hosted by Google Arts & Cultures, allows users to tour the ship and the platform allows users to see the collections of participating museums from anywhere in the world, incorporating virtual reality 360 technology.

Cavalier is the last surviving British destroyer from the Second World War remaining in the UK, important because she represents the efforts of the Royal Navy’s destroyers. In 2007, she became the official memorial to the 142 British destroyers lost and the 11,000 men killed on them during the conflict. Destroyer crews braved harsh conditions and enemy action, knowing their vessels were unlikely to weather a serious hit. They proved vital - hunting U-boats, escorting convoys, evacuating troops from Dunkirk and Crete and being the eyes and ears of the navy.

As well as making Cavalier more accessible, VR uncovers areas not open to the public. Tracy Spaight, Wargaming’s Director of Special Projects, explained: “It’s the nearest thing to actually being there. The engine isn’t just something that is in front of you, it is two storeys tall and all around you. We can really capture that with 360 VR and share it with the world.”

Britain at War was later contacted by The Tank Museum, with details of its project as part of their Tiger Collection exhibition. Also working with Wargaming, they have implemented Augmented Reality technology, meaning a rare German assault gun, the Stürmtiger, can be seen at the museum despite not physically being there.

VR/AR projects help to preserve. Indeed, The Tank Museum has reported visitor numbers have increased off the back of digital projects such as ‘Inside the Tanks’, or through other Wargaming products. Chatham also expects visitor numbers to rise.

Although Cavalier and The Tank Museum’s vehicles are not under threat, unfortunately nothing can last forever. Cavalier is still afloat as this keeps pressure off her hull, therefore corrosion is a constant concern. If the ship was permanently dry-docked, a facility Chatham has, this would create pressures on her hull which could damage it despite every effort to protect the ship. Built with the expectation of surviving a year, who can predict what Cavalier will look like on her 200th birthday in 2144? 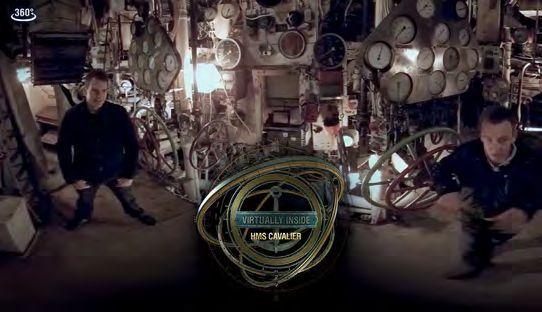 The VR project means a detailed visual record of Cavalier will be available for generations to come. Wargaming believes in ‘giving back’ and partnering with museums allows them to do this, a view shared by Tracy Spaight: “It’s one thing to read about these [exhibits] or see them in video, but it’s quite another experience to be able to knock on the ship and just walk around… But, for those who are not able to, what we’ve tried to do is to fill that gap.”

Dan Snow stated: “I grew up doing old-fashioned 2-Dimensional TV. The excitement of being able to harness new technologies, to take the audience into spaces I have been privileged enough to go into, is what keeps me going. I absolutely love it. AR/VR totally benefits history. These are real spaces, this new technology gives this whole sector and genre world-beating potential.”

Richard Holdsworth, Museum & Heritage Director at Chatham Historic Dockyard Trust, explained: “It gives us the opportunity to reach people. The engine room is just too dangerous. It is the environment, the vertical ladders, the low headroom. This will give people the opportunity to see it. We’re really pleased and proud to be involved.”