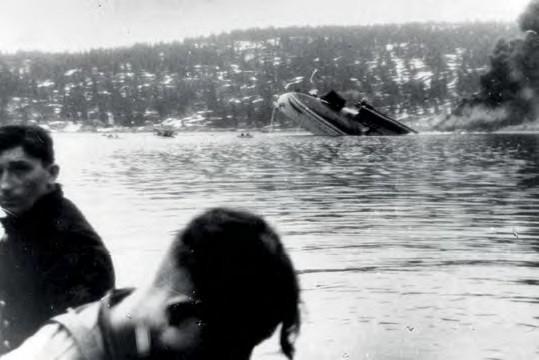 The capsized Blücher sinks in the Olsofjord. (NATIONAL ARCHIVES OF NORWAY)

PORTSMOUTH-BASED minehunter HMS Cattistock has found ten mines and torpedoes during a search for wartime munitions off Norway.

The two-week search, which ended in March, saw the Huntclass vessel serve as part of SNMCMG1 (Standing NATO Mine Countermeasures Group 1) alongside one German and two Norwegian vessels.

Norway was invaded by Germany on 9 April 1940 and, despite Allied assistance and a fierce defence, was occupied until the end of the war. British operations to disrupt enemy shipping sailing along the Norwegian coast then continued throughout the war. The RAF mined the area with Hampdens, Wellingtons, and later four-engine bombers, each capable of dropping several mines in a single sortie.

Estimates claim the British sowed 48,000 aerial mines in European waters during the war, and between April 1940 and January 1942 at least 164 Axis ships were sunk or damaged by them. The cost was relatively light - 94 aircraft, around a third of total aircraft lost, and with 50% greater success – when compared to direct attacks on shipping over the same period. While there were post-war efforts by the Royal Navy, and the British-organised German Mine Sweeping Administration of former Kriegsmarine crews and vessels, to clear them, it proved impossible to find all Allied and Axis mines sown in European waters, especially air-dropped types where their placement was less-meticulously recorded.

The Oslofjord was particularly heavily mined, and over the decades 100 mines have been found there alone. With Royal Navy divers operating at depths of 60 metres, with no visibility, and in extreme cold, the clearance operation was arduous: “The environmental conditions were incredibly challenging – water temperatures down to freezing, often causing the formation of ice … Diving operations were unusually demanding” said Leading Diver Karl Atkin, adding: “[We often] had to identify the mines by touch.”

However, conditions deteriorated, and the last two miles of the search route had to be abandoned as sea-ice started to close the bay.“There were people walking their dogs on the frozen sea, where we should have been mine hunting!” said Cattistock’s CO, Lt-Cmdr Charlie Wheen. In all, the NATO vessels discovered 27 mines and four torpedoes, with the British sweeper accounting for more than a third.

As she left the fjord, Cattistock used her sonar, able to pick up a football-sized object at depths of 1000 metres, to scan the wreck of the Blücher. The brand-new 16,000 German heavy cruiser was sunk, with the loss of more than 800 soldiers and sailors, in the opening hours of the invasion after being torpedoed by the Oscarsborg Fortress in the Battle of Drøbak Sound, where the fortress commander, Oberst Birger Eriksen, and the retired Kommandørkaptein Andreas Anderssen, led a spirited defence that bought enough time to evacuate the Norwegian King, Parliament, and gold reserve, from Oslo. 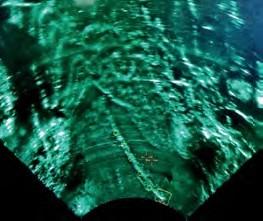