Ellie Evans ventures inside Liverpool’s best-kept secret –a building that helped win the Battle of the Atlantic and, therefore, World War Two 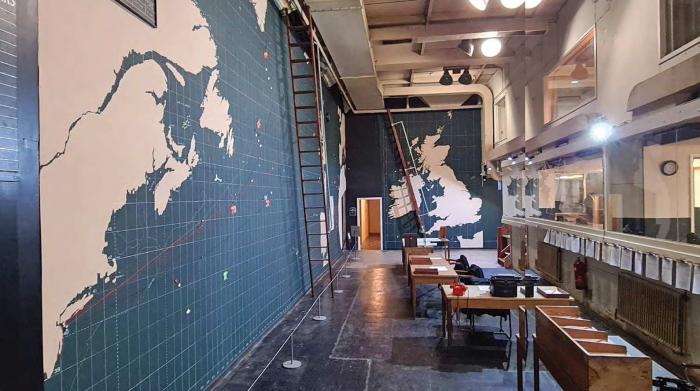 THE OPERATIONS ROOM FEATURES A VAST (44FT BY 24FT) MAP OF THE ATLANTIC OCEAN. ON THE EASTERN WALL IS THE HOME PLOT, SHOWING THE WATERS IMMEDIATELY AROUND THE BRITISH ISLES
ALL IMAGES COURTESY OF THE WESTERN APPROACHES HQ MUSEUM

Finding this hidden bunker beneath the streets of Liverpool is the first challenge, but it’s worth the extra effort to uncover the fascinating stories of the Western Approaches Area Combined Headquarters.

Once the bustling wartime centre of operations for the Royal Navy and RAF protecting the Western Approaches, the two-storey underground base had been left empty and bare by 1993, when local businessman Bill Davies saved it from re-development to commemorate the 50th anniversary of the Battle of the Atlantic. It was taken over by award-winning social enterprise Big Heritage in 2017 and has been carefully renovated and restored, to create a riveting, handson experience. Indeed, there’s the feeling that staff of old have just popped out for a cuppa – which is precisely the aim of the museum team. The operations room appears exactly as it looked when the doors were closed on August 15, 1945.