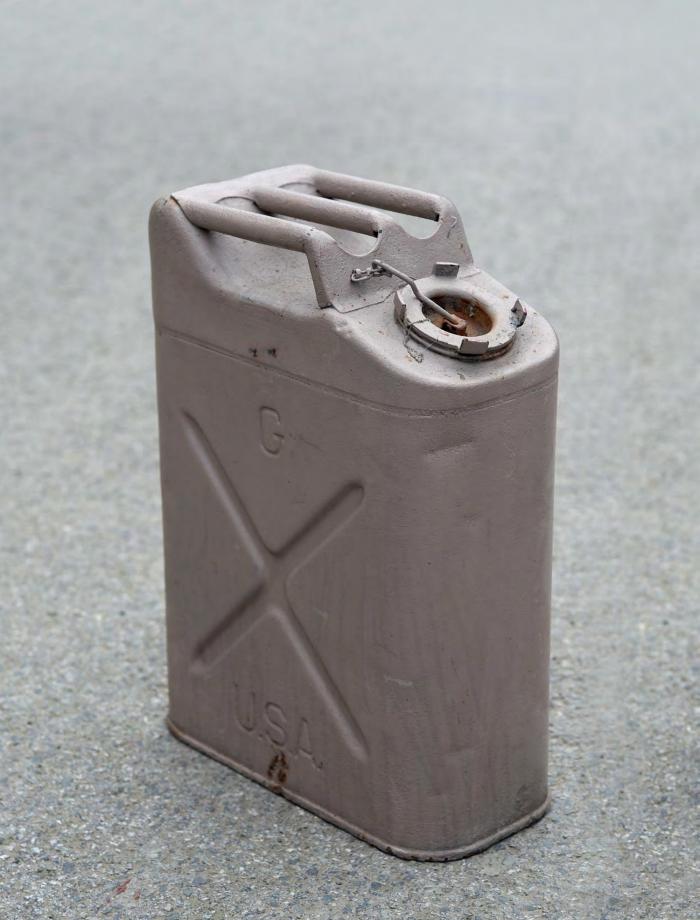 An American Jerrycan. World War Two and post-war cans were marked USA on one side and QMC (Quartermaster Corps) on the other. The QMC was dropped during the 1950s

In last month’s article we considered the design of the Wehrmacht-kanister, how it addressed the need for a superbly designed fuel container, how three samples were smuggled out of Germany, and how the British copied the design and turned it against the might of the Nazi war machine. Now we must go back a little in time, and see what became of the remaining two Jerrycans which Paul Pleiss had managed to obtain from the stockpile at Berlin’s Templehof airport.

After his arrival in India, Pleiss had managed to make his way to France, presumably by air. Now, on September 11, 1939, he sailed from Le Havre, aboard the SS Washington, disembarking in New York on September 18. It seems increasingly likely that Paul Pleiss had contacts within the US War Department, for he swiftly became involved in discussions involving the design of the Jerrycan. At some stage he was told that samples were needed, and, as described last month, he had his car, still containing the Jerrycans, shipped to the USA, via Turkey and South Africa.

Pleiss gave the War Department one of the Jerrycans for evaluation, and it was sent to the US Army centre for the research and development of military vehicles, at Camp Holabird near Baltimore. In a report dated September 18, 1940, ‘Advantages of the German Can’, delivered to the ‘Armored Force Board’, the following outstanding features of the German design were listed:-

1) The German can would stack, and when stored would not shift or roll.

2) The can was light enough to be carried and used by one man, yet strong enough for field use.

3) The full can would float, and the type and loca tion of the handles were ideal for field conditions.

4) The closure required no tools for opening, no accessories for operation. It would not open without intent, and would stay open while pouring, and a vent pipe was provided.

5) Dirt, sand, and water would not collect around the opening.

6) The container could be used for drinking water.

For some reason two of the main qualities which made the German design so impressive were ignored by the staff at Camp Holabird. They produced a copy which retained the size and shape of the original, along with the three handles, but lacked the secure cam-operated closure, and the two-piece welded construction. The latter features were replaced by the same screw cap as the existing US World War One cans, and a threepiece construction, with rolled, rather than welded, seams. The reasons for these changes are not well documented, but it is likely that the screw cap was chosen from a financial perspective, as vast quantities of the screw fitting were held in US Army stockpiles, and the rolled seam was seen as more suitable for mass production. As an interesting aside, crates filled with the screwed cap fittings, still coated in protective ‘Cosmoline’, turn up to this day in US military surplus sales! 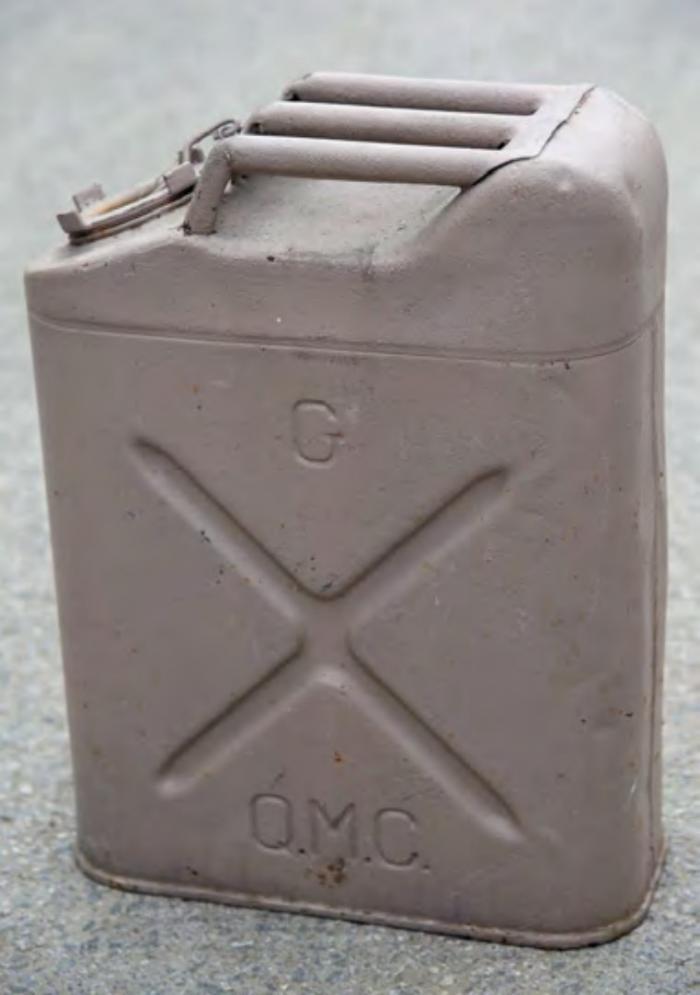 American Jerrycans have a screw cap

The redesigned Jerrycan was approved for use by the American forces, but the modifications were soon revealed to have shortcomings – the rolled seams were prone to leakages, and the weakness of the screw cap in field service conditions was recognised. The United States Marine Corps ordered Jerrycans which were copies of the German original for their own use, rather than rely on the army design.

Last month, at the end of part one, we closed with the British Eighth Army poised and ready to take on the Afrika Korps at El Alamein. By now, using a combination of captured enemy supplies and newly-manufactured British copies, they were equipped with sufficient Jerrycans to minimise the fuel shortages which had plagued earlier operations.

General Auchinleck, for whom the unreliable ‘Flimsy’ fuel cans had been a constant source of operational setbacks, had been replaced by Lieutenant-General Bernard Montgomery, and between October 23 and November 11, the Desert Rats achieved a decisive victory over the Axis forces, turning the course of the war in North Africa, and eliminating the threat to Egypt and the Suez Canal.

Rumblings of discontent over the imperfect US design of the Jerrycan in combat situations, combined with a report sent back to Washington by two US quality control officers, led to a reduction in production of the Camp Holabird can. Agreement was reached that British production of the original design would be increased in the build-up of material for the proposed invasion of Fortress Europe. 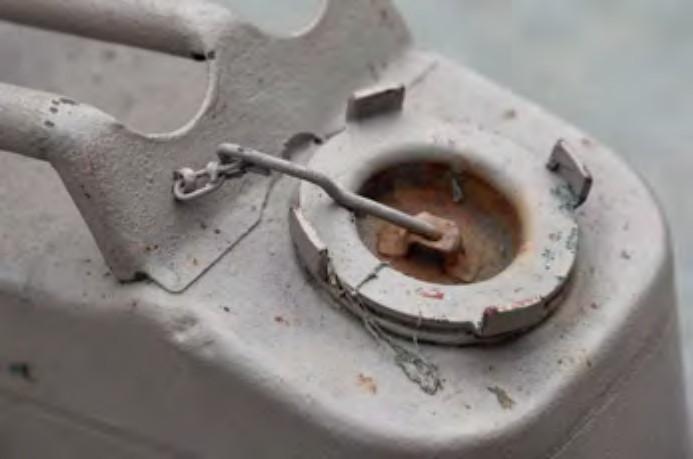 USA on one side, QMC on the other

It will never be known exactly how many Jerrycans of fuel were involved as the Allies swept across the continent in the summer and autumn of 1944 – some sources say 19 million, others 32 million. In theory, forward units were supposed to return empty cans, but in practice, many were just dumped. The losses were staggering - in October 1944 alone, over 3,500,000 Jerrycans were lost. Civilians were offered cash incentives for the return of empty cans, though judging by the number of World War Two-dated examples that are offered for sale in Normandy, many never returned to military service! 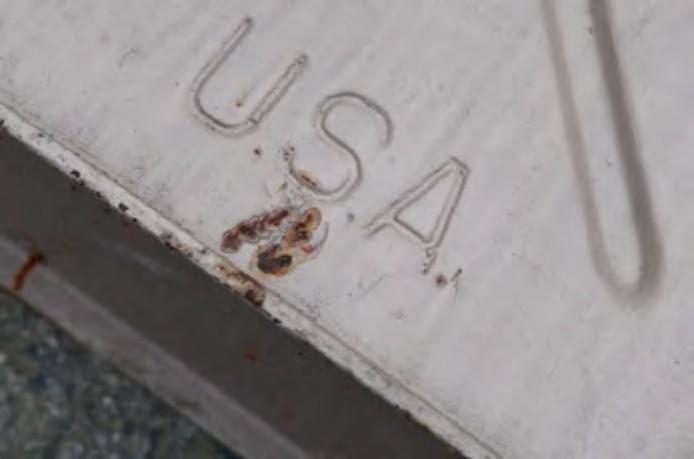 As the supply line from Normandy to the front increased, some means had to be found to keep pace with the problems of distance and need. The way forward was found in the ‘Red Ball Express, effectively a circular convoy system using around 6,000 vehicles, and carrying forward about 12,500 tons of supplies a day. From August 23, until November 16, 1944, it operated continuously. In addition to vehicles carrying ammunition, food and general supplies, many of the GMC CCKW US Army trucks carried nothing but Jerrycans of fuel. The versatile ‘Deuce and a Half’ could carry 875 (US) gallons, keeping the front line moving onwards towards the Third Reich itself.

With the capture of the port facilities at Antwerp and the restoration of a functioning railway system, the Red Ball Express could be stood down, but it, along with the Jerrycan, had provided the logistical chain which drove forward the Allied advance.

Thus, with the German designed Jerrycan turned against the very people who had identified the need, and created the perfect product to satisfy the demand, we move towards the end of the story. Two things remain - the first is a quotation from the US President. Recognising that without the Jerrycan the campaign could easily have stagnated if fuel shortages had occurred, President Roosevelt wrote in November 1944 that: “Without these cans it would not have been possible for our armies to cut their way across France at a lightning pace which exceeded the German Blitz of 1940”. 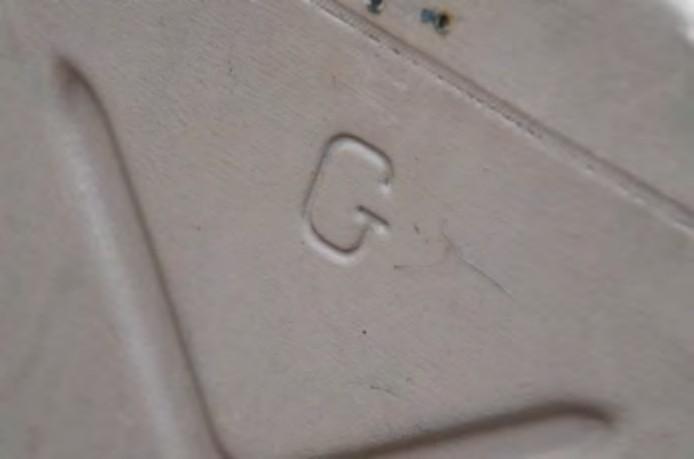 G signifies gasoline confirming it as a ‘gas can’