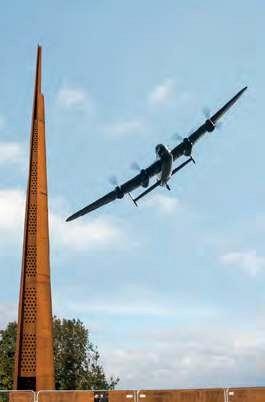 The BBMF Lancaster passes over the IBCC Spire in 2015.
(COURTESY IBCC)

An early stalwart of Bomber Command, and one of the many images housed in the IBCC collection, a Fairey Battle of 88 Squadon RAF.
(COURTESY IBCC)

A DIGITAL archive comprising more than 1,000 oral history interviews with veterans of RAF bomber Command, as well as survivors who experienced the bombing, has gone ‘live’. The initiative provides researchers, historians, enthusiasts and families with a wealth of previously unavailable material.

The project is the result of a mammoth undertaking by the International Bomber Command Centre (IBCC) in Lincoln, and, to date, more than 500 recordings have been transcribed. The archive also contains personal documents, such as photographs, diaries, letters and logbooks. In total, 3,500 individual pieces are available, including some 2,000 photographs. Many have never been seen beyond the families who own them.

The oral history section includes interviews with veterans from Australia, New Zealand, Canada, South Africa and the West Indies as well as more than 150 interviews with German, Dutch and Italian survivors of the bombing campaigns. It would take 1,049 hours, 43 minutes and 3 seconds to listen to all the interviews, according to the IBCC.

So far, just 3% of the material preserved by the archive has been processed and published online from the collection that contains more than 225,000 items and comprises 6,000GB of data.

The archive is still receiving and digitising new collections and a great deal of work remains, much of it undertaken by the centre’s team of dedicated volunteers.

To find out more, see: https://internationalbcc.co.uk/historyarchive/digital-archive

Inside the Chadwick section of the International Bomber Command Centre on the outskirts of Lincoln.
(TIM DOYLE)