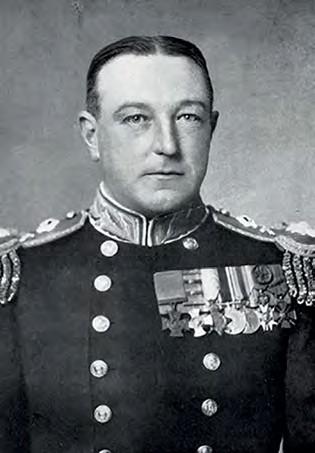 VICE ADMIRAL Gordon Campbell VC was born in Croydon in January 1886, and by his 31st birthday in 1917 had risen to the rank of commander in the Royal Navy.

Campbell would leave the service with a VC, a DSO & Two Bar, the Croix de Guerre, and the Légion d’honneur. Campbell, in command of the Q-Ship HMS Farnborough, had already sunk U-68 in March 1916. The U-boat had approached to 800 yards before Campbell opened fire with his concealed armaments. The crippled U-68 began sinking but was, quite literally, blown out of the water by Farnborough’s depth charges – a historic first use of the weapon.

While passing south-west of Ireland on 17 February 1917, lookouts sighted a torpedo in the water. Campbell deliberately allowed it to hit Farnborough in the stern. The fact she now sat low in the water, combined with the efforts of a ‘panic party’ (a feigned abandonment of the ship) convinced the captain of U-83, Kapitänleutnant Bruno Hoppe, Farnborough was sinking.

Although U-83 had only been in commission for five months, she had completed two patrols and already sunk five merchant ships – including the 5,200 ton Crown Point. Hoppe was sure Farnborough would be his latest victim, surfacing within 100 yards of her. However, U-83 was subjected to a barrage of machine gun fire and 45 shots from concealed 6-pounder guns. The first shot decapitated Hoppe, and U-83 quickly sank.

For this action, £1,000 of prize money was split amongst the crew, and Campbell was awarded the VC.

The torpedo hit to Farnborough, however, was critical. Campbell destroyed the ship’s papers and radioed for help. Within an hour of his transmission, HMS Narwhal and HMS Buttercup arrived and towed the ship. She was deliberately beached at Mill Cove.

The memorial stone was commissioned to mark the achievements of Campbell, and was unveiled at Croydon’s Cenotaph, a century to the day since the historic action. The Mayor of Croydon, Wayne Trakas-Lawlor was in attendance, as were other dignitaries and naval personnel. Commander Campbell’s citation was read, as was the naval prayer.

Trakas-Lawlor stated: “It’s thanks to the bravery and selflessness of people such as Commander Campbell that we in Britain enjoy the freedoms available to us today – freedoms that we’re sometimes guilty of taking for granted… I hope people will come along to the cenotaph to pay their respects and say a quiet ‘thank-you’ to a brave man.” 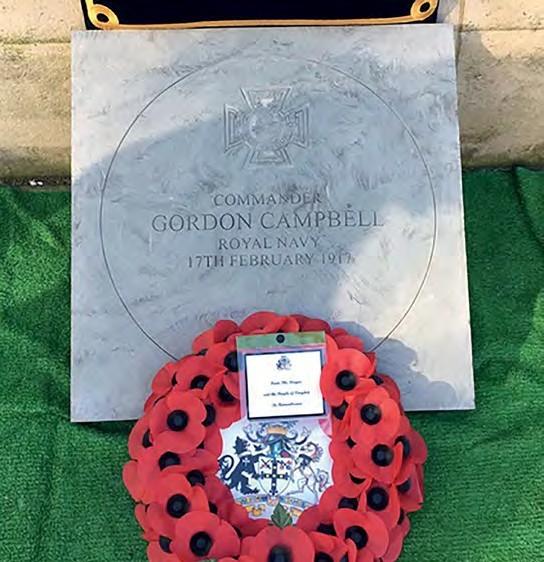 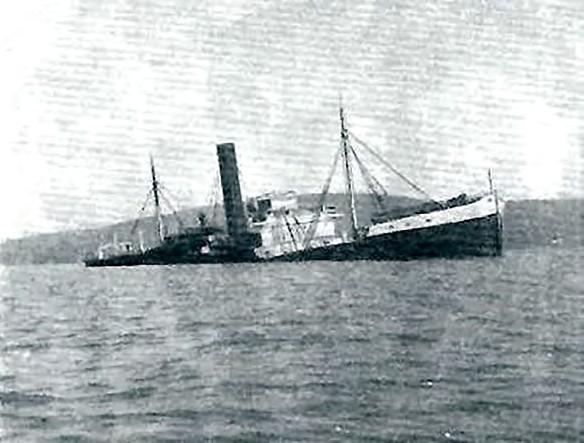 The National Army Museum has reopened following an extensive £24m renovation. The London-based museum, the leading authority on the British Army, holds a varied collection and presents the Army’s history in a honest manner through a series of galleries: Soldier, Army, Battle, Society and Insight.

☆ The Royal Navy has marked the centenary of the sinking of HMS E49 in the Shetland Isles. E49 struck a mine laid by UC76 on 12 March 1917, with all 31 crew lost. Submariners joined locals to unveil a memorial at Balta Sound, overlooking where UC76 laid her mines. The installation was facilitated by Harry Edwards, a former policeman, inspired to research E49 after arresting divers for illegally salvaging her wreck in 1990.

Services to remember those killed in the Channel Dash have taken place in Ramsgate and Yeovilton. The exploits of 825 Naval Air Squadron were remembered by ‘The Channel Dash Association’ and navy officers at Ramsgate, while in Yeovilton, a service at the FAA Memorial Church honoured the same aviators and today’s 825 NAS performed a flypast in four Wildcat helicopters. Cmdr Simon Collins stated: “I am delighted we are able to mark this significant anniversary…to remember the bravery and sacrifice of our forbearers… 825 NAS is at the forefront of the future of the FAA… this will be our next legacy.” Adm. Lord Boyce reflected: “Lt. Cmdr. Eugene Esmonde of 825 Sqn, 75 years ago, led six Swordfish against the heavily defended and powerful German flotilla making its Channel Dash… knowing as they closed the enemy their annihilation was certain.”